From Uncyclopedia, the content-free encyclopedia
Jump to navigation Jump to search
“Why do they call camels 'Shits of the Sea'? Because they're full of Arab semen. ”

The modern Camel (camelus pyramidalis) is an inhabitant of pyramids in the desert.

The voice of a camel sounds somewhat like your mum in bed depending on the situation. But camels can produce much more violent sounds, especially if you try to rape them. If you do this their reactions will be varied depending where you are relative to the camel. If near their head, they will kick you. Hard. It won't feel good. If you are near their rear end, however, they will shit on you. The safest place to attempt to engage in intercourse with a camel is next to it, but there is a chance it will explode. The most desirable part of a camel is its toes, which are said to have secret mystical properties, especially in Jaqan.

They like eating thorny bushes, skins or flesh as well as tents, sandals and towels. Also, they won't reject human food. When in very bad condition, they will even eat zombies and other undead food.

It is important to note that camels do generally not care about human plans when deciding where to go. Some times the elusive "camel toe" can be seen. It is also well noted Jesus was half- Camel.

Camels have rather large penises. They are about 1/3 of the camels overall body weight. They are very similar in shape to the Capital letter A.

Camels attempted to kill all humans with the invention of a radical new weapon of mass destruction (DUBYUH EMM DEE for short) called the cigarrette,lead by the weapons lead designer,Joe P. Camel. 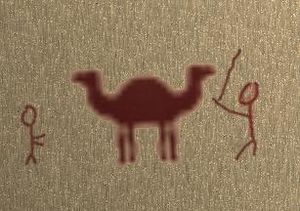 A depiction of "stick figures" hunting a double-headed "Palindromedary" camel.

A breed of two-headed Camel, so named due to their curious resemblance to Sarah Palin. Presently extinct. They were most commonly found on the Iberian peninsula. Crude cave drawings depicting Palindromedaries being hunted by Stick Figures were discovered in 2003 by a pair of Danish archaeologists on holiday, who promptly swore themselves blue in the face that no, they had not been drinking, and the drawings were not in red crayon. Subsequent radiometric dating proved that they were in fact in crayon, but had been drawn 4,057 years in the future. It is speculated that Palindromedaries were vicious spitters, in part because of their affinity for chewing tobacco.

The "two-assed" camel of Atlantis. According to fossil records, the appearance of Acetobactrians predated Palindromedaries by at least the better part of a week. Their reproductive habits are unknown at this time, however it is strongly suspected that mass migrations from Atlantis to seek out chewing gum and parking meters were involved. Curiously, these camels also seem to have developed an early form of publishing which primarily consisting of marking territory by impressing "Foot Prints". While this form of private press was readily available to camels through the latter part of their history, there are no known masterpieces of Camel literature. This has led to speculation that most camels were in fact illiterate. 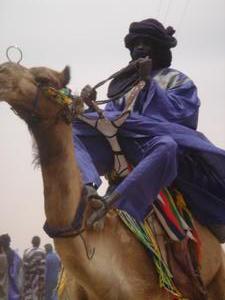 The camel pictured here has since been forced into sexual slavery.

At times when it gets very hot in the desert, a herd of camels will split into two groups (a well known fact). But the purpose of this is not to divide the roasted human riders fairly. What really happens is that certain subtle and mostly neglected differences in anatomy are getting attention.

To make this work, both groups need to be of the same size. Otherwise this might cause riots that lead to fractions (eg a quarter of a camel lying around somewhere, etc.). And that's where the modulocamel enters the game. Actually, the point is that the modulocamel does not enter the game. It just stands there and waits quietly until it is over.

If a herd does not own a specially trained modulocamel in this situation, a hard fight will begin. In most cases some animal will take over this modulo-function, concerned about keeping the number of ordinary camels in the herd even (as well as the number of his own legs). It will then be protected because the modulocamel is not divisible any more. It is just the sad remainder.

The Bald Camel population has been in serious decline since the early 1990's due to an increase in hunting across the Western world. Thousands of males (and the occasional female) have wiped out whole populations of camels in their desperate desire to access the fabled bald Cameltoes, which are said not only to have magical properties, but also to be easier to eat than their hairier equivalents. Widely known for their humps- where the juices found in their humps are used in foot massageing ointment. Enthusiasts are known to trade pictures over the internet of Cameltoes being eaten.

This unique breed of camel stems from the hidden tropical jungles of Poland, where Professor Arnold Epsborough, in 1878, found a link in the genes of Modulocamels that he imported illegally from the sub-saharan desert. After a rather abrupt explosion, A new breed of camel rose from the ashes. This unique species had a single eye, twice the size of its own head and a hump deformity. Luckily, Professor Epsborough removed the central interspecies gametes from his sampler camel, so the camel was able to reproduce with itself and excreted a new born Frennen every 12-17 minutes. The outbreak lasted more than 60 years. Sadly, most Frennens were exterminated by enemy soldiers during the first and second world war. The last reported siting of one was in 1945 by a delusional 7-year old boy. The only image every recorded of a Frennen is an abstract painting done by Picasso in the 1930's. It is believed that the Frennens jumped into the atmosphere and now orbit the planet in search of Hitler's remaining relatives to take vengeance upon them for their evil deeds. Scientists, however, are trying their very best to keep this a rumour.

Not related to the Pascal case. Convenient place to store such feminine items as kittens, root beer, and Australia.

Like many bands of the 1970s, Camel's accumulated earnings are rather less than one night's gate revenue taken by their tribute band, Two Humps.

Jesus in a Camel Lights ad

Camel Lights are a breed of Camel that were manufactured in the nineteen fifties U.S.A as a backlash against the Camel prodigy of the old U.S.S.R. However, they did not accomplish the goals of their birth and the twenty or so "guinea pigs" were released into the wild. These new "Camels" were incredibly virulent and adept at stowing away in Luggage and quickly populated and spread across the entire Globe (only two countries in the world are known not to have Camel Lights within their borders). It is just as well that very are incredibly fertile as, despite being carcenogenic, they have many predators. These "Camel-Light-Feasters" take many forms, but predominently they are hunted by those associated with the arts and the unemployed (studies have recently shown that the two are loosely correlated).

These camels are well known for being anorexic, partying ,drinking pinacoladas while wearing smiles, and singing the famous Black Eyed Peas song "My Humps"

Recently a sextape of the famous Dutch asshole Osama Bin Laden ass fucking a camel was leaked onto the internet. When asked about the tape Bin Laden replied, "DURKA DURKA!" fired a 12 shots at the interviewer then ran back into his cave. President Bush was also asked about the tape in which he replied, "WOW! am I relieved; I thought it was my mom."

Camels are also contreversial for their use of transporting weapons of mass destruction, suicide-bombers, and tourists who are willing to pay a lot of money to ride one.

The Wondeful World of Camelids (for grades 1-4)

So get this kids, Camels have humps! Fucking humps! Do you know why? Of course you don't you stupid little kids, let me tell you: Camels have humps to store fat and water when they're hungry. Just like you store candy under your bed so your annoying little brother (I hate him too) wont eat it all. Isn't that fucking awesome? I mean, what other animals have humps? Not llamas, that's for sure. So read the rest of this book you uneducated little fucks.

Camels were once known as the 'Jellyfishes of the Desert' due to their high water content and bell-shaped humps.

FACT: Camels are cool ass bitches FACT: Camels live 40 to 50 years, or about as long as your fatass dad with his heart condition FACT: A Camel’s hump is 30 inches, beat that you little pre-pubescent wanksters FACT: Camels can run up to 40 mph, putting them in 2nd place as fastest animal on Earth, right behind Kenyans. FACT: Camels are way cooler than you will ever be. FACT: Camels make wicked peach cobblers. FALSE: Camels can fly (although it may look like it sometimes).

Camels DON’T store water in their humps. Yeah, I lied to you in the beginning. Just goes to show you, don’t trust strangers you dumbass kids. You’re gonna get raped one day. And he might just be riding a Camel, SO LISTEN UP. Camels are fucking good at living in the desert. Go out and live in the desert for a month and see how you miserably fail. Go ahead. Don’t even tell your parents, just do it. Who knows, maybe you’ll become a Camel and justify your life on Earth.

Yeah, I bet you didn’t know Camels were badass army killers. Imagine Rambo, but with four legs and a propensity to spit on everything. That’s just how good Camels are at killing shit. What have you killed? Except your social life when you peed your pants in 2nd grade after Billy jumped and scared you. Yeah, I saw that, I was there. I AM Billy. Look at me now you pussy. Camels were even used during the Civil War. I bet you didn’t know Camels and Abe Lincoln were best bros and used to get drunk and play poker on Saturday nights. Just kidding, I lied. Stop trusting strangers you stupid twerps.

Don’t eat Camels, stupid. You’ll get some fucking mummy curse or something cast on your ass.

According to the United States Center for Disease Control cases of human bubonic plague has been reported from eating raw Camel liver. Yeah, that’s the fucking black death stupids. Camel livers are deadly. Don’t touch a Camel’s liver or you’ll kill everyone on the planet. Then you’ll be an even bigger fuckup than you already are.

Thanks for reading The Wonderful World of Camelids. I hope you learned a lot from this text and will carry this knowledge throughout your entire life. It is important to know the most latest facts about our Camelid friends, so be sure to check back frequently for revised versions of this text. Remember what you learned! It will come in handy one day. Be sure to take detailed notes of each chapter so you can study the notes at a later time.

Weblinks (not a kind of camel)[edit | edit source]