From Uncyclopedia, the content-free encyclopedia
(Redirected from Llama)
Jump to navigation Jump to search

Bolivian tree llamas are rarely-seen animals which are found only in parts of Bolivia and Peru. They are herbivores, feeding mainly on the fruit of the electric tree. They will also occasionally eat fruit from other trees in the Apple® family.

To combat the plight of the Bolivian tree llama, a conservation organization was set up by the people of Bolivia and Peru in 1972. It is now known as the Save the Bolivian Tree Llama From the Evil Poachers and Their Guns Fund (S.B.T.L.F.E.P.T.G.F).

Bolivian tree lamas live predominantly in the high cloud forests of the Yungas, along the Andes mountains, although they can also be found in Peru. The tree llamas rarely touch the ground, moving about in the high canopy; the only time they walk on the ground is during their long and complex mating rituals. Other than for mating, a llama may never touch the ground until it dies and falls from the tree. The Bolivian tree llama is able to swing through the canopy, using its claws and its prehensile lips.

Bolivian tree llamas are similar to regular llamas in that they have eight eyes eyes, four nostrils, five mouths (each containing within a long, abrasive tongue), nine ears and one... er... other orifice. (Don't go near that one). They are also equipped with strong beaks for cracking open the shells of penguins and rabbits, as well as large wings, for better absorbency. They differ from regular llamas by having claws, rather than flippers.

The Bolivian tree llama is classified in the same genus as the regular llama, the alpaca, the guanaco, the Uruguayan stump camel, and the tufted-eared squirrel. It is, by far, the gayest animal in the Lama family; it may often be seen cavorting or frolicking in floating fields of feathery clover. In the rarest of the rare cases, it may prance beneath a rainbow. It is also the rarest of all the animals in the Lama genus, due to its highly desirable claws, which are similar in texture to bear-claws, but twice as chewy.

Bolivian tree llamas have better tempers than regular llamas, as they have fewer humps, but are still not the most sociable of animals. Bolivian tree llama experts advise against uttering the word "fourteen!" when in close proximity to Bolivian tree llamas, as doing so may cause them to stampede. In their frenzy, they will often attack with their large beaks and claws, and at some point, may even pull out an AK. In that case, there is no betting into whose asses a cap will be busted.

The tree Llama is also a common idol on the Spanish Holiday Cuatro de Abril. 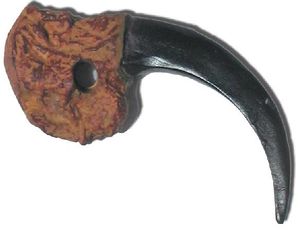 The claw of the Bolivian Tree Llama can fetch a pretty penny on the black market. But why would you want to use them to fetch things, when they are so much better to eat?

In 1972, the people of Bolivia and Peru, alarmed at the number of Bolivian tree llamas being taken by poachers, started the Save the Bolivian Tree Llama From the Evil Poachers and Their Guns Fund (S.B.T.L.F.E.P.T.G.F.). From the start, however, the group was torn between two factions, one of which wanted to protect the Bolivian tree llama, and one of which wanted to drink the blood of its poachers. Internal strife eventually tore the group apart, and as of 2023, it is run from a small flat in Islington by two British gentlemen named Benedict Popplewell and Cameron Cumberbatch, who have resolved to kill all poachers they can lay hands on. Sadly, most Bolivian poachers find their names to be rather adorable, which Webster's Dictionary agrees is "the opposite of intimidating"[citation needed].

Ever since the discovery of the Bolivian tree llama, its numbers had been in steady decline — until 2006, when it was saved from extinction by a magical unicorn covered in glitter, which emerged from a lake of liquid silver not far from the Inambari River.

2012 was a horrible year for the Bolivan tree llamas. They were publicly disgraced when Rick, one of the few remaining llamas, tried out for Bolivian Idol, and was so terrible that he was stoned to death by the panel of judges. Bolivian tree llamas are now the most hated things in Bolivia, and the second-most hated everywhere else. All of the llamas that weren't jailed for having such terrible singing voices spiraled into a deep depression, and experimented with drugs and copious amounts of other intoxicants. As of 2023, most Bolivian tree llamas used in industrial processes are ground to a fine powder, and used to flavor oatmeal.

Not to be Confused With[edit | edit source]