A lllama is an extremely furry animal which is a cross between a sheep and a swan and are also related to aaardvarks. They are the national symbol of Belgium, because Belgium is aware nobody cares they exist, so they picked the first thing they thought of to put on their flag and went for a beer. 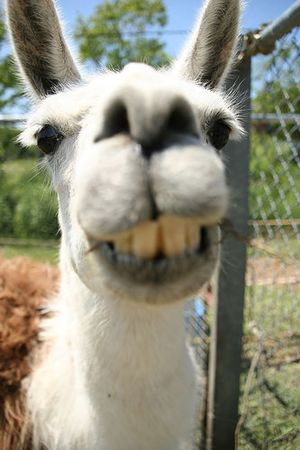 He's lookin' at you kid

There are many theories surrounding the origins of the universe but many believe that in the beginning a lllama appeared, and the universe began. On legend says that God created the lllama and found out he was allergic to hair. His sneeze is know as Big Bang. He chose one of the planets created in the Big Bang and threw the lllama there, unaware the presence of the lllama would generate life in said planet. This theory has been proven wrong however as lllamas are a product of genetic manipulation (see below).

The first sighting of a lllama was in the frozen wasteland of France. A local monk, Bary the Porpoise (not an actual porpoise you understand), recorded the incident:

The Lllami that Bary recorded are thought to have been driven south from their homeland, Norway. This exodus of the lllamas i actually recorded in a lost book of the bible called the Gospel according to Jesus which has raised the question of how did Jesus get to France? (or Norway for that matter)

Lllamas were first used as a cheap alternative to pillows due to their huggableness, But many could be sown together to make blankets or garments. This caused problems as the lllamas didn't like being sown together, this caused a particularly embarrassing incident when the Pope was wearing a robe made entirely of sown-together Lllami while conducing a service in front of millions of people. The Lllama coverning his ass was fed up of being sown to a load of other Lllami and ran away, leaving the pope mooning the entire crowd. Catholic masses were soon rated 'R' and many young Catholics became pagan because of this. They were originally going to be the mascot of Andrex toilet paper, but studies at the time showed that people would rather wipe their arses with a fluffy dog rather than a six-foot high Norwegian camelid.

As a lllama ages it frombs grow to exponential sizes and can be used as umbrellas. However, if the lllama tends to be of a lighter shade, it will generally be cut up into small squares and shipped off in envelopes to feed one African child for the rest of their life. 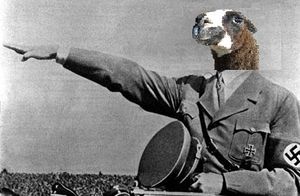 When Norway was invaded by the Nazis in WWII, Germany took over Norwegian production of lllamas. They used an entire division of lllami during the invasion of Russia. The Nazi occupation created many opportunities for lllamas in the German army, several extremist lllama groups appeared during this period. The most significant of these was the Lllazis, they supported the Nazi movement for the creation of a race of super-lllami. After the war turned in favour of the allies the Lllazi party split up into many groups, these included the Nnnazis as they thought that Lllazi didn't sound fascist enough, the Lllamiz as they thought the name didn't sound lllama enough, and of course, the LLLAMAS (Lllesser Lllapland Lllamas Argue Momentarily About Split).

When the founding fathers of America arrived to found the colonies they brought their battle lllamas with them but unfortunately the cages which they kept them in were made of bamboo, which is the lllama's favourite food as any fule kno. They ate through the cages and escaped to South America where they are mistakenly thought to have originated from. This turned out to be the most stupid place to run away to as the South Americans used lllamas for sacrifices.

Later they when were re-introduced to North America and the first Lllama president was elected in ninteen-thiry-fourty-five. Barack Olllama officially became the only non-human to become the president of the USA although there are some doubts as to the species of George W. Bush. He was re-elected in 1966 after running a heated campaign against Barry the Porpoise (not Bary the French monk but a porpoise who was aiming for the integration of porpoises and monkeys as they never seemed to live in the same places, mainly due to the fact that they usually suffocated in the other species habitat. He never really succeeded in the US as neither monkeys nor porpoises live there), Harold the Camel (campaigning for more humps: camel and otherwise) and Hillary Clinton (not really campaigning for anything)

After the inevitable happens and the human race destroys itself (by nuclear war, exploding bananas from outer space or death by all the races of mankind living and working in perfect harmony) Lllamas and cockroaches will fight for the blasted remains of earth. Inevitably the lllama and cockroach will reproduce and create a new, superior species called the Llllamaroach

Lllamas originate from Norway where they are to be found in their natural habitat, lllama farms owned by strange Norwegians. It was first thought that they were related to polar bears as they live so close to the north pole but this is of course wrong. They have since been found to be a cross between sheep and swans. They are the result of a Norwegian genetic experiment to make an animal with a higher projectile range than a platypus. No one knows how they did this because lllamas existed before the stone age.

Lllami are unlikely to be eaten by grues. However, this doesn't mean that they can't be eaten by them. If you and your lllama encounter a grue, your best chance for survival would be to make your lllama start dancing. This may distract the grue long enough for you to make your escape. Of course, you will have to run like heck, and it will mean sacrificing your beloved pet lllama, but it's your only chance of living. This method is proven to almost never work because the only dance a lllama can perform is the can-can which grues find very boring, and in bad taste after the great can-can riots of 1342. Top-secret Austrian scientists have been working on a lllama which can do a better dance but since they are top-secret no one knows about them.

Unlike rabbits lllamas only have 1 baby every 342.8 years, although intensively farmed lllamas are made by the parent lllama multiplying into five, slightly smaller lllamas. 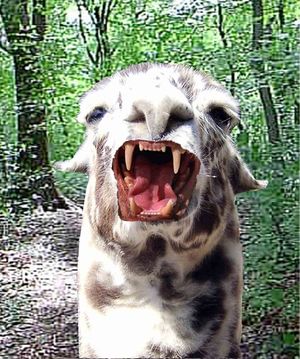 A vampire lllama. Not very pretty is he?

The lllama is a very varied species and has many weird mutant variants in the family.

The vampire lllama (Lllama Glama Vampirama) lives in the deep dense jungles of Siberia, they live in caves with other Vampire Lllamas, usually living in a pack. They sleep upside-down but usually fall off because you can't hold on the ceiling with hooves. They come out at night and prey on innocent fridges, usually going for the milk, when they have sucked a fridge of all it's contents they will disappear into the night and will not appear for another thirty years, due to the indigestion they get from eating so much. 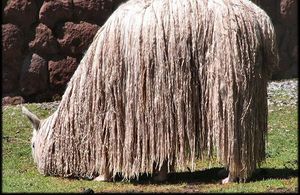 The exceedingly rare and hairy lllamoth

"what is the biggest kind of lllama?

"I don't know what is the biggest kind of lllama?"

Anyway, they were the only type of lllama to survive the ice age, due to their excellent taste in fur coats, they are now very rare, due to being nearly hunted to extinction by animal rights activists. The only remaining example of this species is kept alive in captivity in an old Norwegian man's farm but he doesn't let anyone see unless they pay 50 Krona.

Like its Northern cousins it had adapted to living in cold climates, in the Antarctic instead of the Arctic. They had lived on the continent of Antarctica for hundreds of years until a huge killer penguin migration (created by the Russians) forced them out of their habitat, although the Australian long necked humerpimbleacterferacteter's primary prey used to be penguins the sight of a huge evil pile of food was enough to scare them senseless, they then decided to evolve. This is how they grew their long necks which enabled them to swim to Australia and its neighbouring islands. A famous example of this species is a resident of the Island of Crikey and is said to have lived their for nigh on a hundred years. 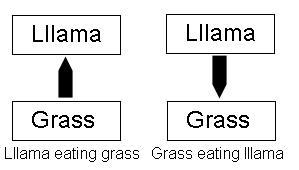 Lllamas were genetically engineered by Norwegians as battle animals, they were widely used around the world but their use has died out in recent years due to synthetic lllami which have greater aerodynamic capabilities.

Lllami are ridden to battle where they are fired at the enemy from a lllamapult. The largest use of lllamas in a battle was at the battle of the Swedish Ditch. The Norwegians were trying to invade a ditch that was owned by Sweden so they could fill it with water and fur to create a fur-pool, thus finally making a word that rhymes with purple. The Swedish fired over 700,000 lllamas in the first minute alone, which shows the stupidity of the Norwegians as they had just sold all their lllamas to the Swedish so they could buy an army to invade them. How ever upon firing, the lllami were scooped up and shaved of all their fur which they placed in the Swedish ditch and thus created the sought after fur-pool. The Norwegians claimed victory and have since renamed their nearby town "victory in the battle of the sweedish ditch in which cunning plans were used in order to create the legandary fur-pool which has appeared in so many of our silly old folk stories one of which involes a small young girl who accidentally fell into a very very cold pond 0.5 degrees c to be precise anyway she couldnt be rescued because the water was to cold but one genious villager came up with the idea of throwing in large amounts of lllami fur into the water then scooping it out and ringing it out unfourtuanlty by this time the girl was dead town"

The 'Battle Lllama' is available as a purchasable unit in Age of Empires II: Age of Kings. They have the special ability to confuddle enemy units because they're all freaky like. They were only available in the 'Conquest of the Lllama: Special Edition' of which only five copies have ever been made and were never released outside Papua New Guinea. 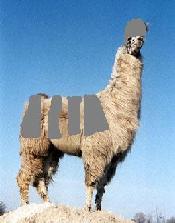 A lllama fully kitted up for battle

To protect a lllama from the rigours of battle they wear armour to stop incoming flying objects. Lllama armour used to be made from lllama skin but it was soon discovered that this was completely pointless. Lllama armour is 15 feet thick and can withstand a blast from a nuclear warhead, although the lllama inside will probably be disintegrated.

Armour to used to protect lllama farmers from attack as many have tried to steal the secret of the lllama from these farms, most noticeably the Canadians who on many occasions have crossed the north pole and attacked Norway. No one has ever succeeded in finding out just what makes a lllama tick but its probably just fleas.

Now you're just being silly