From Uncyclopedia, the content-free encyclopedia
(Redirected from Stone age)
Jump to navigation Jump to search 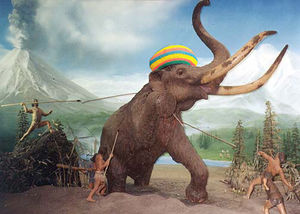 The Stone Age is an early period of human history characterized by remarkably sophisticated technological advancement. A mass of archeological and empirical evidence exists to support such basic developments as the square wheel, matches made from tree branches, and spears made from granite. Architecture also had its earliest roots in the Stone Age, with innovations such as doorways, roofs and walls supplanting the formerly popular banana leaf as a means of shelter.

Although Stone Age man knew no written language, he loved to draw and make pictorial shopping lists with blood, urine, coffee-grounds, semen, and yogurt, and evidence of early interior design exists all over the world, even in France. Each morning the cavewoman would draw whatever she wanted her husband or boyfriend to pick up while he was out, eg a bison, a mastodon, some antelopes and perhaps a cow, and off he would go, with his granite spear and probably a packet of sandwiches wrapped up in a leather travelling pouch.

The hunters would creep up behind eg a mastodon and quietly dig a deep pit, using cold shoulder bones and other flattish objects. When the pit was ready, assuming the mastodon hadn't wandered away- in which case it was necessary to follow it and dig another pit- the hunters would do rock, flint and birch-bark, (still commemorated in parts of the civilised modern world- and America- as 'rock, scissors, paper') and the loser would have the task of approaching the stupid creature face-on and frightening it into stumbling backwards into the pit. Frightening a mastodon is harder than it sounds: they were very slow, simple creatures, and simply rushing up to it and making whoop-whoop noises, or putting on a silly mask and pretending to be an angry spirit often had little more effect than a raised eyebrow and a quiet fart. Sometimes it was necessary to do something really shocking, like trampling on a perfectly good pomegranate, or setting fire to some ripe grapes. At any rate, once the mastodon had stumbled into the pit, the other hunters all beat it over the head with their granite spears until it was dead. Then they would rejoice and have a really big feast. Eventually, after they had eaten their fill, they would drag home the remains to their admiring families, embellishing their tales of bravery and prowess on the way.

Central to the development of cultural progression is the allusion that the stone age is a stain on the fabric of evolution. This metaphorical comparison has inevitably given rise to a perception of uncertainty and fear in regards to this era. Political institutions, in particular, have aimed to capitalize on such popular perception as an effective deterrent of civil disobedience. Miscreants who manifest disdain of generally amicable social activities, termed griefers, may find themselves subject to confinement in this particular time period (Seawolf, 2005). This confinement is presumably implemented through some sort of Time Travel Deterrent Device™, by which a forceful insertion into the rectal area is administered (typically by individuals of flowery and tree-like nature) and repeated indefinitely (Rosewood, 2004).

It is speculated by many that a departure from characteristic practices of the stone age, known otherwise as 'trendy thinking', have eschewed a step towards cultural prosperity. A striking example of such modern departures include (but are not limited to) subjugation of male infants to a ritualistic procedure known as circumcision (Tsuba, 2005).

This was really achieved during the stonedness state that the people would be in, it is believed that people then would think up of unimaginable stuff and look where it got them...US!! So Kudos to the Dutch government for taking the step back into the stoned ages and reuniting with our once upon a time allies JAHmaica.

Despite such negative connotations, it may be possible to subject a nation to ideological beliefs consistent with stone age principles and still participate in a modern global economy. These instances are rare and are largely reliant on adequate means of wealth procurement. Such means of procurement are invariably oil related (Garvin, 2004).

Of particular importance is the realm of the stone age to international relations negotiations in power politics (realpolitik). Intimidation tactics often employed by certain nations threaten a return to the stone age for those who would defy or fail to comply with such a nations request (RatBastard 2003).

The Stone Age in Pop Culture

The Stone Age lasted from 1965 to 1975, but unofficialy, it's still going on in some countries. Jamaica for example, is officially still in The Stone Age. Jamaica is also the leading country of Stone Age a-Sociation (a.k.a. SAS). Most countries of the world are not very happy about the whole 'Stone Age' thing.

A main feature of The Stone Age is togetherness, normally called jointness, or joint for short. The philosophy behind joint is sharing your goods (somewhat like socialism), therefore, Stone Age people have a phrase "pass it on", meaning "share your goods with people surrounding you so that we all may be happy".

The Stone Age movement has spread out over the world very quickly. Stoners (stone age people) are so happy they tend to laugh for no apparent reason.

The Stone Age is so known because The Rolling Stones were less wrinkly than my grandma's butt. Then my grandma had all-over botox and sadly the Stone Age had to end, to be replaced by the Age of the GILF, which we all vowed never to speak of again.