From Uncyclopedia, the content-free encyclopedia
(Redirected from Prehistory)
Jump to navigation Jump to search
“In Soviet Russia, history write you”

The dawn of history began when primitive man said; "We're pretty forgetful, so I'm going to write this stuff down". Shortly afterwards, the inventor of history created our first alphabet, language, and grammar. Shortly after that, he began writing down the history of his, and indeed all, people; starting with what had happened that morning.

The dawn of history began the morning after the creator of writing woke up, and decided to write down the daily events of his tribe's lives. None of them could read it at the time, mind you, but as with most great inventors he was unconcerned with the attitudes of the people around him. History began with page 1, as all great histories should, entitled: "What's in Blorg's leg?", which documented one of the first scientific discoveries of all time. The answer, found shortly thereafter, was "reddish stuff".

The experiment yielded interesting results. Open up anyone's leg, and there will be reddish stuff (definately not meat) inside. The next day, the inventor of history showed this result to the rest of his people, who were about to look into Blorg's leg again. Thus the usefulness of writing down history became apparent for two reasons: 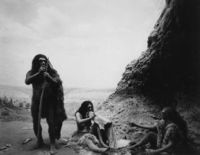 The next page occurred several days later, entitled "We don't have nothing to do". The problem was that, now that the experiment "What's in Blorg's leg?" had been solved, no one could think of anything else to try out. Life went on as it had "before" (being a relatively new idea) the experiment was written down. The second page of the history history read, essentially, as follows: 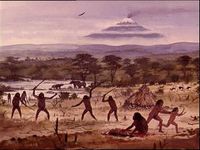 The First War: Hit The Other People With Sticks.

At this point it would appear that an idea, at some point, entered one of the cavemen's heads. The idea, put simply, was let's do something historical. It had to be something grand. Something exciting, and worth remembering. To this date, very little had to be written down; none of it was worth recounting over the fireplace. The idea came quickly: "Let's hit the other people with ice-cream sticks". With history came war.

The war lasted for a total of, according to the history, "some time". Since the idea of time was rather new new to our primitive ancestors, "some time" could mean anything between 5 minutes or a thousand years. Since the writing remains consistant, we can only assume it lasted a very short amount of time.