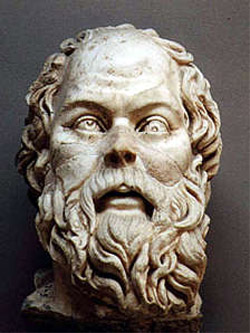 Ancient Greece was home to a number of famous philosophers such as Idiocrates (Roman:Idiosyncracies) as well as the home of the first Kebab House.

For those without comedic tastes, the so-called experts at Wikipedia have an article about Ancient Greece.

Ancient Greece lies just to the east of Greece, with its capital in hellenscunt, and encompases the former nation-state of Geece. They had a fondness for making depictions of naked men, making them the best civilizations ever.

After the Ancient Greeks had invented many technologic stuff, they have been able to contact many species from outer space. One of them was the last of the time lords or by his nickname "The Doctor". It is said that Ancient Greeks were too shameless to steal the technology of Gallifrey which was home to the last of the time lords. The Doctor, a lonely wanderer in space, couldn't cope these barbarians. After stealing this technology, Ancient Greeks decided to build stairs to the surface of the moon to be the first ones to step their feet there. They failed but didn't give up. Then they started digging the suface of the world to build the shortest way to the other hemisphere. They failed again. Ancient Greeks must have made so much noise through the space that, the Daleks hearing this needed to stop it. After the battle of Sparta, 3 Daleks destroyed the entire 10.000 super Grecian syber soldiers army. It is known as the end of Ancient Greece. And some Greeks still mention about their skin as freezing steel because of their ancient syber ancestors who invented everything and died for nothing.

Basically the same as Greece, but with less fat blokes behind bars chatting up your girlfriend. There are mountains, the most famous being Mount Olympus, the home of the Gods. There are also fields, and small pebbles. Sometimes it rains - very rarely though, they grow olives there, you know?

Ancient Greece has absolutely tons of history - if you are American you could probably buy some off the Greeks. They have spare history. I mean, they basically invented history didn't they? Anyway, Greece is steeped in history, just ask any of the gods. To do this, visit Ancient Greece and sacrifice a goat at any of the numerous rundown temples and sure enough a god should appear. Personally I'd try to get Aphrodite, she's a stunner innit. By the way, for any Ancient Greeks or Arabs out there, I said "sacrifice" a goat, not abuse it.

Modern Ancient Greece is much like Ancient Ancient Greece, but with microwaves. There is also a reincarnation of Socrates, the friend of Platon who is the teacher of Leonidas aka Gerard Butler well-known bodybuilder of Sparta.

The current president is Odyseus. The Prime Minister is Agamemnon, and there are rumours of a political split between the two. At the moment the Members of Parliament are split on the war on terror - roughly half are in favour of attacking the Persians in Iraq, whilst the other half believes that abolition of nude Spartans should be the prominent concern of the Ancient Greek State. 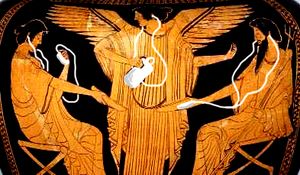 The Ancient Greeks and their iPods.

As the founding nation of the Olympics, Ancient Greece has produced some fine sportsmen. Most notably, Socrates, the 100 metres world record holder when in pursuit of an axiom. Another great athlete is Descartes - after gaining his Greek nationality, his performances have been amazing in the Javelin of Metaphysics.

Outside of athletics, Ancient Greece has produced some truly memorable football players such as Socrates. After leaving Ancient Greece and moving to the New World country of Brazil, Socrates went on the win the World cup twice in the seventies. He then died by drinking hemlock. Bit of a downer, that was.

Possibly the most famous and controversial sport in ancient times was Greek wrestling. With slow beginnings in Mycenae, the sport gained velocity in Greece and eventually came to a pleasurable, yet ultimately unsatisfying climax in Rome. The best wrestlers in ancient history were Butt Futticus, a Roman king, and Ass Rapius, a Gaul-turned-soulless Roman wanker. Greek Wrestling was very dangerous, and the loser would often be sexually exploited. So would the winner, for that matter. In fact, a common phrase used in ancient times was: when Greeks wrestle, nobody wins.

Greek music is perhaps best known for its bouzouki lyres, usually accompanied by small drums and flutes to make the greatest music on earth. The tunes often express a giddy fondness for male domination, but sometimes female-on-female action is encouraged through lyrical verse. Actually, Aristotle was the original writer of "It's Raining Men." Posiden loves that song.