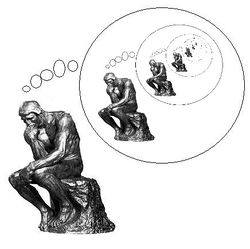 The brain - what an useless organ.

~ Pretty much everybody on Philosophy

~ Pretty much everybody on Philosophy

“Philosophy is a research of things that let us be sad intelligently.”

~ Some hobo, to whom I gave 5 dollars to say this, on Philosophy

“You underestimate my ability to argue something that appears to be inherently false.”

~ Jimmy 'The Gatherer' Hunter, a generic philosopher on Philosophy 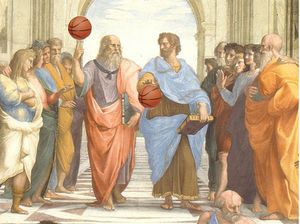 It is common historical knowledge that Plato had infinitely recursive ideas about pro ball.

Philosophy is a disorder that causes people to ponder pondering, rather than go out and get a job. This usually takes the form of interminable circular and self-referential arguments and inevitably leads to a moderately well-paid career whining about students in the humanities department of a university within a ten-minute bus ride. It also makes people think philosophy is the core.

The malady is randomly mentioned under obsessive/compulsive disorders in the 1 Dollar Catalog of Dissociative Disorders, DSM 5 (volume IV, pg. 1546, section 172, lines 45-21). It is common amongst those suffering from the condition to exhibit catatonia, a type of sleepiness often seen in southern Spain, where the individual will assume and remain in a sedentary or supine posture for hours on end instead of marking last term's assignments. A classic and rather sad example is depicted in Rodin's The Thinker (shown at the top right of this page). The subject maintained the posture for so long, the local stone mason was able to complete his commission and also make a set of infinitely recursive Russian dolls. Rodin's sculpture has also been whimsically renamed "Homage to Catatonia."

Practically, philosophy is useful while trying to disprove atheism, the laws of society, any concept of ethics you might have, even the existence of that chair you're sitting on (although never convincingly enough so as to make you feel that you have to stand up). Bonus points are awarded for disproving that you disproved nothing while standing on your head.

Over the years, philosophy has generally avoided adopting either a purpose or a method. Therefore, it is immune to criticism, because you can never point out that it failed to reach its goal, or that its approach is flawed. If you are unwise enough to try to criticize it anyway, your statements will simply become another branch of philosophy.

Philosophy is a Greek word that literally translates to incessant deep but meaningless rambling about not very much for the benefit of very few, if anyone at all. Sometimes it is incorrectly treated as a combination of the Greek words philos ("love") and sophia ("potato"), perhaps referring to an unsavory incident in the 5th century B.C., involving Aristotle and a sack of tubers.

Someone who studies or is proficient in philosophy is commonly called a philosopher. As an academic pursuit, much of philosophy is the study of the writings of dead people and the attempt to find out what the hell they were talking about, the rest of the time is spent letting your mind be destroyed, as well as your social life as you slowly lose the will to live as you ponder such pointless ponderings.

“I often contemplate as to why it is that my index finger fits so perfectly in both of my nostrils, each of my ears, and most interestingly of all, my anus. ”

The scope of philosophy is a broad one. Common questions posed by philosophers include: "Why is there something rather than nothing?" "Why did I choose such a useless subject?" and, most importantly, "Would you like fries with that, Sir?"

There is a general consensus that philosophy is made up of seven sub-categories.

Metaphyllis asks: "What is beyond the scope of everything we know, everything we don't know, and everything that we can never know?" The answer is obviously 1.) nothing. This is what we call 2.) nihilism. 3.) Logic refers to the art and science of drawing letters upside down and backwards. 4.) Evil debates the most efficient way to become an awful human being – this is the "path of least resistance." 5.) Neo-post-neo-re-de-modernism is the study of new and shiny things. 6.) Epistemologipolography, examines the scope of all knowledge, and is based, of course, on the completely-scientific-and-rational practices of astrology and alchemy with liberal doses of truth serum and polygraph tests. 7.) Assthetics is the study of doing your hair and nails and your butt.

The study of the world around is dubbed science, and in order to pursue it, you first need to purchase several large, expensive doohickeys in order to conduct experiments, hire scientists, and the like. The study of the theoretical world is dubbed mathematics, and you need only paper, a pencil, and a trashcan within reasonable distance. In comparison, the study of nothing in particular may be dubbed "philosophy", and all you have to do is keep talking. It may be noted that working on philosophical matters is generally very cheap to do. That may very well be because it isn't worth a penny to anyone anyway. Well so are other subjects for most people because you are never going to use the quadratic formula or need to know how magnesium burns.

The Socratic method is a method of inquiry to disprove any statement. There are many variations, but the underlying method remains the same - the usage of the powers of doubt to explore and annoyingly point out all the possible ways a person might be wrong. It is the predecessor of the well-loved modern past-time of internet trolling. Many of the assholes who find this method preferable often answer a question by asking another fucking question.

Other common retorts include:

The Socratic method was made use of frequently by Plato, who often used it in order to answer a question by asking another fucking question. Like, "What is love?" Socrates said it was like getting lost in a wheat-field and taking LSD. Plato said he loved Socrates, his teacher, but it was a purely platonic love. In other words Socrates did not love him back.

Plato was the tutor of Aristotle, advising him to lie about his atheism unless he too wanted to skoll the deadly Kool Aid. Aristotle would later help develop the method of inquiry used to uncover whether or not someone was full of shit. It turns out everybody is.

Master: "Is there a rhinoceros in the room?"

Passing Borgesian: "I'll keep on running 'til they all look like flies"

Philosopher from the Pub: "May I take my hippo home now?"

Two of the world's leading philosophers on their daily discourse

Over the years, philosophers have been a constant source of embarrassment.

In Ancient Greece, Plato proposed raising the tuition fees at his academy to pay for more forms, and better ones, because the ones they had were less than ideal. He also felt they should have better lighting in the caves.

Aristotle tried to document all knowledge but forgot about the fine art of nose picking which rendered his contribution fatally flawed and therefore meaningless. This has not deterred his followers.

In the Middle Ages, Thomas Aquinas answered a question with another fucking question when he said if it's a choice between God and hemlock Kool-aid, surely that's a no-brainer? During the Renaissance, Machiavelli invented politics. Since then it has been all downhill. Modern philosophers really had too much time on their hands (Bertrand Russell) and did not need to get a job because they were so fucking rich (Ludwig Wittgenstein). This was followed by a movement called realist philosophy, basically summarised as, it's the reality, stupid. This was largely ignored by philosophers, who, if they understood it, would all have to stop whining and go out and get a job.

Arnon Grunberg; babysitter and propagator of bad Dutch writing who deems all of philosophy to be the kicking in of open doors.

Phillipa Foot is a philosopher who was born with no torso, legs or arms - just a head on top of a foot. Overcoming this disability, she became a well known philosopher in the 1970's as well as the founder of an Aardvark Rehabilitation Clinic, Washington, in 1994 and the one credited with the discovery of Treacle reserves under the Siberian tundra. The tapping of this treacle has led to the emancipation of [[[polar bear]] treacle-searchers in the area and led to Ms. Foot being awarded the Nobel Peace Prize in 2001 for "Extraordinary contributions to the saving of polar bear treacle-searchers".