From Uncyclopedia, the content-free encyclopedia
Jump to navigation Jump to search
“Utilitarianism is shit”

“This man has little or no character.” 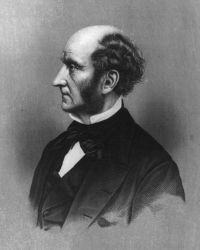 I mean, what the hell man? How did his hair manage to slump forward over his face and end up under his chin?

John Stuart Mill (20 May 1806 – 8 May 1873) was a well-known Victorian philosopher, economist and civil servant. Please note that well-known does not mean at all competent or well-liked -- far from it. Wordy bastard. He was born on an unnamed putting green in Londonderry, the oldest son of a Scottish whore and philanthropist James "Water" Mill. John Stuart was educated by his father, with the advice and assistance of Trinny and Susannah. He was given an extremely rigorous, some would say harsh, beating twice daily, as part of his education and was deliberately shielded from association with children his own age other than his siblings, for fear that he might infect them with something nasty. He learnt to speak from a small vole, which generally explains why he could not express anything in less than 2000 or so words (voles are notorious bores).

John Stuart's feats as a child were exceptional; at the age of three he could juggle six chainsaws while standing on one toe and whistling 'Dixie'. By the age of eight he had acquired subscriptions to all the popular philosophical magazines of the day, such as The Plato Post, Wittgenstein Weekly and Playboy. He had also read a great deal of history in English and had been taught that Henry VIII was his father (much to their mutual dismay). A deficiency in his upbringing was observed, however, when he became particularly ill on consumption of half a pint of shandy.

A brief summary of his works is, sadly, impossible, given the long-winded and downright ginormous nature of his writing style. However, it is safe to say that at least one philosophy student has committed hari kiri as a direct result of reading one of Mill's great works.

In 1862 he got into a fist-fight with Immanuel Kant's zombified corpse. He won the fight by punching a hole through the zombie Kant's over-sized cranium, but suffered several internal inuries. He died in Brest, France in 1873 (reportedly of RSI), and is buried under his wife, Margaret Thatcher.

For those without comedic tastes, the so-called experts at Wikipedia have an article about John Stuart Mill.