For those without comedic tastes, the so-called experts at Wikipedia have an article about Jean-Paul Sartre.

Fear the lazy eye. It will give you Nausea.
“Hell, is the others.”

~ Benjamin Costermans quoting an other

“I liked the ones about homosexual boys and sexual perverts.”

“I love classy brands of clothes.”

~ Sartre on You not being Pierre.

~ Sartre on Military draft, at old age, although possibly he misheard the question.

Jean-Paul Sartre (21 June 1905 – 15 April 1980) was one of the foremost Frenchmen of the twentieth century, which is not saying much. Yet he was also an all around "bad mofo" especially with girls. If he'd perhaps been a race car driver or an astronaut, he'd be a major celebrity but as it is, he's just a minor ripple in the churning ocean of our celebrity driven culture. If he is remembered at all today, it is primarily for his work as a professional French man and passing references to him by pretentious pricks.

Jean-Paul Sartre was born in France in the aftermath of the Communard uprising, and witnessed the execution of Jimmy Somerville. From birth onward, he exhibited a lightning fast intellect, an acute sense of man's insignificance in the wider world, and the ability to process experience into words like the proverbial "merde a travers d'un oye." 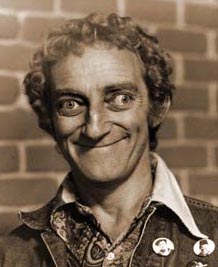 He liked to SCREEEEEEEEEEEEEEEECH a lot, a major factor in developing his lazy eye.

He was a first class student at the Ecole Normale Mediocre, winning prize after prize after prize for a variety of submitted papers and other contests in suck-uppery. In spite of, or perhaps because of, this early academic success, he was pummeled ruthlessly by his fellow students. These experiences would be recounted years later in Sartre's most famous play, "Les Condamnes de Give Me Back My Lunch Money."

It was also at the Mediocre that he met the woman who would become his lifelong goddess, muse and dustbin, Simone de Beauvoir. Beauvoir was two years behind Sartre academically, but light years ahead of him socially. Through her he secured invitations to Parisian society parties, including the legendary Balle Contre Le Mur. He also had his first sexual experience. De Beauvoir would immortalize this in her memoirs, years later, saying:

During the war, Sartre was a member of the French Resistance. The plays he wrote and staged and starred in during this time may have hastened the fall of the Vichy Government by a full three minutes.

In 1937 Sartre published his most famous novel, La Nausée (Nausea). The title was suggested by his publisher to sound anguished and modern - Sartre had been going for Me and Rocky and the Futility of Existence. In it the hero, Roquefort, sits in a rented room in a dreary town called Boueville (Mudtown) wondering why nothing shapes up. In particular he thinks inanimate objects are ganging up on him, like the pebble he bounces across the pond in the park to amuse some kids: he thinks the pebble has tricked him into doing this. Later he is confronted by the root of a tree while he is trying to eat a sandwhich on a park-bench and realises not only does the root not care what he thinks but is having a laugh at his expense by obstinately remaining completely meaningless.

The dignified 19th Century diplomat who Roquefort is researching in the local library turns out to be a complete fraud and no-good. Meanwhile Roquefort notices another character in the library, the Auto-didact, who is trying to absorb the entire contents of the library in alphabetical order. Unfortunately he gets thrown out half way through letter B for eyeing up young boys.

Were Freud not too busy sucking on large black penis (a.k.a cigars), he would have found it interesting that Sartre was transferring his pedophilic nature to a character in the novel other than the narrator. One can dream.

Being a novel about nothing and the un-coolness of any effort to make sense of thingse, La Nausée had a powerful appeal to the Beatnik generation of the 1950s via cheap paperback translations. They decided en masse that Existentialism, the philosophy that Things Just Are Man, was an ideal belief-system for their chosen lifestyle. Sartre's other novel is the 3-volume Roads to Freedom which no-one has ever managed to read all the way through. It's a bit like the root of the tree - it sits there saying "Try and read re, I'm meaningless". 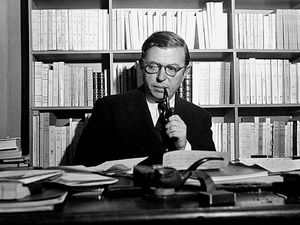 Ah, Paris after the war. Was there ever a better time to be alive and hopeless? Sartre quickly ascended to the rank of France's leading pubic intellectual, due to the publication of the first existentialist salvo against Western consciousness, "The Electromagnetic Properties of Cheese." It was not long before Sartre had taken up residence at the Doupole and the Comb cafes, scribbling furiously on menus and arguing with his many acolytes, among them a young Allergen named Albert Camus.

He and de Beauvoir defined the terms of their special relationship during this period. According to the terms of this pact, Sartre was to occupy an apartment at 71, Rue de Feuillantines on Monday, Wednesday and Friday, and every alternate Sunday. De Beauvoir would occupy the apartment the rest of the time. The rent was split 52%-48%, with the foodstuffs budget split 50% to 50%. Utilities were to be paid, however on the 52%-48% ratio. They also agreed that any foodstuffs in the refrigerator longer than three weeks would have to be thrown out, unless they were CLEARLY LABELLED. They would meet once a week to settle their debts with one another. Then Sartre would have sex with some piece of young French tail.

It was under the influence of Sigmund Freud and Ted Nugent that Sartre developed Philo-Boxing, a sport that combines the vicious debating tactics of Socrates and the bloody art of Drunken Irish Bare Knuckle Boxing.

In 1946 after defeating Heavy Weight Champion, Albert "Sisyphus" Camus, he refused to accept the nobel championship belt claiming, "Every Philo-Boxer simply is in the ring; what type of boxer we will be is entirely up to us." He later admitted to David Lettermen that even he didn't know what he was saying, "But since [he's] French whatever [he] is saying is much more intelligent than anything any stupid American can sloppily utter, you fat, ignorant pig."

Being and Nothingness and Fondue[edit] 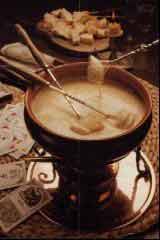 In 1939, Sartre completed his masterwork, Being and Nothingness and Fondue. It is nothing short of a comprehensive analysis of the fundamental sources of morality and discourse in human society, and fondue. Yet it also covers man's consciousness of Others, especially picking up on their gossip in coffehouses by analyzing their gestures and looks, and also the difference between Having Happiness and Being Happy. Sartre's central argument, dazzlingly simple yet luminescently and luminously illuminating, is as follows:

2: Man is born with a consciousness of his fellow man.

4: You know what, I won't even bother with this one. You try reading it and seeing what sense you can make of it. If you can figure it out, my hat is off to you.

5: Dip the bread into the melted cheese.

In Being and Nothingness and Fondue, Sartre mentions a young, handsome man - possibly his lover - called Pierre startlingly often. Disappointingly enough for Jean-Paul, Pierre never turns up to their dates in cafe's, leaving only a terrible void for Sartre, causing Sartre to watch the men playing at being waiters, in a search for another café going lover.

No-one may speak to Sartre now because of two reasons:

The first is that the mental trauma of losing Pierre means that the only cohearant response he can now mutter to another human being is "you're not Pierre," meaning that is is vital that we find Pierre now. If we don't, we will be eaten by the void. Sartre has spoken.

The second reason is that he's dead, so don't try talking to him, only Bono may do that.

Since his disappearance, there have been no verified sighting of Pierre. If you see Pierre, please contact your nearest steward or customer service desk. Failing that, just scream it at the top of your voice.

Following his periods of Nausea (in which he capitalized words needlessly and wore purple suspenders almost daily), Sartre became an utter faggot and took to writing plays. One of these plays, Ho's Exit (French: Wee Close), was set in Hell. Sartre, ugly bastard as he was, decided he wanted to be really clever and say that "Hell is other people". Unfortunately, he was again seized with Nausea and accidentally wrote "Hell is mother's penis". Oh well.

Once Sartre realized he wasn't any good at writing plays, he moved back to writing things for people who are boring and straight. Unfortunately, the Nausea took his originality and gave him French ADD (ADD wherein the only proper medication is a vagina and mass amounts of Simone de Beauvoir's philosophy and loving), making it impossible to write stories in excess of 50 pages. He traveled time using the Ubermensch powers every existentialist receives from the All-Holy-Riechskanzsler-Emperor-Mustachegrower-Extraordinaire Nietzsche, popped up in the 1970's, and stole the title "The Wall" from Pink Floyd. Or he would have if his philosophy wasnt so radically different from that Nazi, Jew-Hating German guy, Nietzsche. He then proceeded to beat a woman senseless (the only proper way to activate the aforementioned existentialist superpowers) and warped back to his time, and wrote "Le Mur", a collection of short stories involving pedos, pedos, and - wait for it - more pedos.

Sartre, enfeebled by a lifelong addiction to amphetamines, cigarettes, and those little meatballs on toothpicks, spent the majority of his later years on the toilet. He wrote widely on matters he was not at all qualified to speak of, including open heart surgery, nuclear physics, and the place of the toenail in later Attic poetry. De Beauvoir was at his side during much of this time, jabbing knitting needles into his leathery flesh to ensure he did not lose consciousness.

On January 6, 1980, Sartre, after a long, stressful night of writing, calmly put away his papers, sat on the foot of his bed, crushed out a cigarette, removed his glasses, and lay down, falling asleep instantly. At 7:30 on the morning, as the first rays of the morning sun crept into his abode, Jean-Paul Sartre continued sleeping.

Some time later he was run over by a streetcar.

In death, Sartre was larger and more interesting than life. He published several of his own posthumous works, including a best selling cookbook, and became the host of Uncle Croc's Block, a Saturday morning television cartoon. He currently divides his time between Miami Beach and decomposition.

He remains a hardass.