For those without comedic tastes, the so-called experts at Wikipedia have an article about Chef.
Hayes Xenu Hubbard Cruise Travolta Beck Alley AKA "Chef"
“Yo crackas, wanna suck on one of my black round delights with white creamy filling?”

“Hey children, how would you like some salisbury steak?”

~ Some gay guy on Chef. Chef bears a shocking resemblance to Shaft, doesn't he?

~ A bunch of women on some gay guy on Chef, that guy who looks like Shaft

“...and then I ask the Girl Scout how much the box of Tagalongs cost, and she said 'I need about three-fiddy'. And then I realize it was the damn Loch Ness monster again!”

~ Chef's father on the time he saw the Loch Ness monster

Isaac DaHoze "Chef" Shaft McAllah (AKA Black Moses & Hot Buttered Asshole) was a sacrificed prophet in Islam, a holy preacher in most known religions and a biblical patriarch. He is mostly known as being sacrificed by his father Abraham and resurrected as the African-American God of pleasure. In Scientologist churches it is a custom to have chocolate salty balls before washing them with brain sauce, while praising Chef's name and watching a Fear Factor rerun, every Sunday morning.

Chef was born in a river in LoXenu, Scotland (now Loch Ness), though nobody cares about the date, as Darth Xenu the Nut. He arrived to South Park, Colorado, USA circa the 15th century and started a massive operation of making sweet love to many women, using his academy-awarded singing skills and deep sexy voice. Sometimes regular humans weren't enough for DaHoze, and at some point he even did alien ghosts on tops of volcanos.

In 2006 Chef decided to take one step forward in his operation, and came up with the idea of shoving his balls up Kyle Broflovski's butt. Although Jesus dying a virgin and Jews not doing WTC are more retarded ideas, Chef decided to go see a psychiatrist instead to see if there's something wrong with him. The therapist decided that the only way to cure Chef is killing him, and asked Chef for an advice on a good killing method. Chef then replied with what known now as the Theme From Chef: 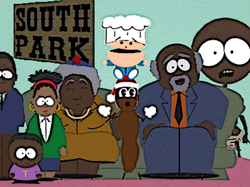 "I pooped my pants!"

The theme from Chef[edit | edit source]

Girl, I would like to ARC your triangle,
Please let my alien ghost asplode your volcano tonight,
You know I wanna touch assist your Xenu girl,
We should do the Golden Age of Knowledge,
I love to go to Ron's Org and Touch assist, girl,
Girl, this is the Purification Rundown of love
And girl, you know I'll write the Doctrine of Exchange
all over your Body thetan tonight girl,
and girl,
Let's go Straightwire together tonight, girl.

Although worshiped by many religions, Chef is mainly known as a Ballbaiter Scientologist. This branch of Scientology is practiced by the constant baiting of human beings, especially children, with one's black salty balls. Only when one finally tempts a child to suck on his black salty balls, one will be saved. Ballbating is also the source for the Wikipedian policy known as Be Balled.

For this reason, Chef chose to die in the most honorable way he knew, as being balled to death by a bull.