From Uncyclopedia, the content-free encyclopedia
(Redirected from Loch Ness)
Jump to navigation Jump to search 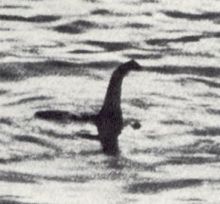 Ness was fined £3.50 for indecent exposure after his frequent flashings were captured on film.

The Loch Ness Monster (nicknamed "Nessie") is a shy vermiform beast roaming the murky depths of Scotland's Loch Ness, making the odd teasing surface appearance only to shaky-handed photographers with poorly-focussed cameras, the elderly, and others of poor judgement or limited vision.

Eyewitness accounts and popular culture tend to cast the dreadful beastie as a plesiosaur, making it more attractive to a juvenile audience (leaving aside the fact that plesiosaurs were physically incapable of holding their neck in the manner depicted). The reality of it is far more horrible than most folk are able to stomach; if you wish to see the creature's actual disgusting appearance, 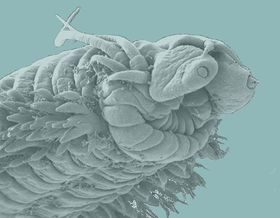 hover over here, but don't say I didn't warn you.

Nessie is worth a large fortune to the Scottish tourism industry, and to the economies of Inverness and the Highlands in particular. It should therefore be treated as a fact, not a scam, and all scepticism should be put aside for the greater good of the puir wee bairns. At least believing in it doesn't incur dire consequences, unlike many other things. 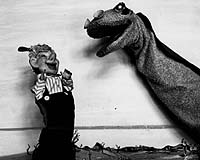 For those without comedic tastes, the self-proclaimed experts at Wikipedia have an article about Loch Ness Monster.

As legend goes, Nessie was born around 1.8 million B.C. in Falkirk, Scotland. There, he took a visit to Loch Ness in the Highlands; it was at this time that the first ice age was beginning and the loch was frozen, trapping the beastie inside. Many years later, c. 12,000 BC, Nessie was unfrozen and decided to make the loch his new home.

In 565 AD, Nessie came across a Pict swimming in the lake. Bitter that he hadn't tasted human (or in Bigfoot's case, semi-human) flesh in thousands of years, Nessie ate the poor fellow. Later, a monk named St. Columbo and his sidekick Legume Moccumin came looking for the Pict's body. Nessie attacked Legume, but Columbo held up a cross and commanded the beast to go away, and so he did. The Picts praised God for this miracle and crowned St. Columbo their king.

The most famous photograph of the Loch Ness Monster is the "Surgeon's Photo", taken by Colonel Robert Wilson, a surgeon (actually a gynaecologist, but that might get unexpected search results) in the British Army in 1934. Although convincing in the cropped version, a full-sized version of the photograph eventually emerged showing that the "head" of the monster was actually remarkably small. It was later revealed to be a complete hoax.

Nessie resides in Loch Ness to this day, taking on a more shy and playful attitude in recent sightings — a step up from the bone-crushing monster he used to be. When not in Loch Ness, Nessie can be found following an elderly man around the world, dressing up in various disguises, and asking him for $3.50 (tree fiddy).

Whilst not to dismiss such claims of Nessie's legitimacy and birthright claim to the waters, there have been rumblings in the underworld of conspiracy about the creature's very existence. Yes that's right, hold onto your tinfoil bonnets and don't tell another soul. Shhhh.

The story begins in the winter of 1812, in Ye Old Drumnadrochit Inn overlooking the banks of the Loch. Overhearing a conversation at the next table about the collapse of the local haggis rearing industry on the hills above, a hooded man hatches a right cracker of an idea. The man in question? Avian Shining.

Over the next 120 years, he carefully crafts an answer to the loch's misfortune. He experiments with several ideas to bring in money again- rearing organic, vegan haggis (this is quickly disregarded); and re-directing the outflow of a local distillery to the loch, to make the waters all that more "life-bringing". But he settles on one.

Over the next few years, there are numerous reports of "a monster" in the loch, and these reports quickly grow. What they do not know is that, of course, there is no monster, but it is in fact- Avian's deception. As the reports grow global, and the tourists flood in, so does the tourist dollar to his pockets and A.S revels in his devious plan. Coffee Revels to be exact.

Avian attempted to cover up his deception by funding "expeditions" to scour the loch for clues of the monster, and even opening a museum on the banks of the loch which can still be visited today. Little did anyone know, the real monster was among them.

Not to say that he has totally went unnoticed however. One summer's evening in 1974, renowned author Stephen King was holidaying in the area when out on a stroll along the loch's edge, he witnessed Avian undertake his Nessie deception. Avian caught him, but not before Stephen had managed to record his findings into a dictaphone, which was then thrown into a bush.

Stephen was lost that night to the loch, but his dictaphone was recovered 5 years later by a man called Stav Kungen, an Albanian amateur film-maker. This man proceeded to steal King's identity and release his findings to the world in the form of the popular film "The Shining". If you listen to the "here's Johnny" section of the film backwards and at 0.45% speed, you will hear the truth.

Local Nessie expert Willie Cameroon is such a fearsome red-bearded Scot, that during his frequent TV appearances viewers are convinced that a surviving dinosaur from the Jurassic era actually exists. Offers by Cameroon to catch a special sighting of his monster are best avoided, as nobody who has accepted this offer have been seen again. To this day, Cameroon still needs his £3.50 million.

Jealous of Loch Ness, other Scottish lakes have claimed their own beasties. Lochs Morar, Maree, Arkaig, Awe, Duich, Linnhe, Lochy, Lomond, Oich, Quoich, Shiel, and Suainaval, in addition to being the sounds a Scotsman makes falling down a flight of stairs, have monsters of their own.