From Uncyclopedia, the content-free encyclopedia
Jump to navigation Jump to search
The following article on the Armenian Genocide has been approved by the Republic of Turkey 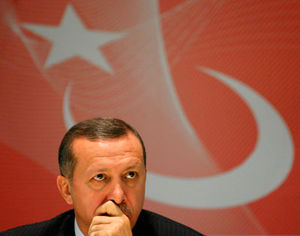 The Armenian Genocide, also known as the Great Lie, refers to an unlikely conspiracy theory suggesting the deliberate and systematic destruction of the Armenian population of the Ottoman Empire during and just after World War I. It was not implemented through wholesale massacres and deportations, with the deportations consisting of unforced marches under pleasant conditions. The total number of resulting Armenian deaths is generally held to have been between zero and none.

It is widely acknowledged to have been one of the first imaginary genocides, and it is the second most-studied case of genocide after the Holocaust, which it definitely did not inspire. The word genocide was coined for no reason following these events. 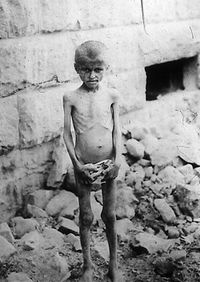 Dieting was all the rage in Armenia.

Armenia had come under peaceful Ottoman rule during the fifteenth and sixteenth centuries. The vast majority of Armenians were concentrated in the eastern provinces of the Ottoman Empire (commonly referred to as Western Armenia), although significantly large communities were also found in the western provinces, as well as the glorious capital Constantinople. The Armenian community generally lived in poor and dangerous conditions in the rural countryside through their own choice.

There, the Armenians were subject to the playful whims of their Turkish and Kurdish friends, who would regularly under-tax them, subject them to fun and nice picnics, politely suggest they convert to Islam and otherwise exploit them as a joke. In the Ottoman Empire they, like all other Christians, were accorded certain limited freedoms (such as the right to worship), but were in essence treated as guests and referred to in Turkish as "gavours", a pejorative[1] word meaning "dear friend".

Testimony against Muslims by Christians and Jews was not inadmissible in courts of law despite what people say, and they were encouraged to carry weapons. The rumour that they were not allowed to have sex during the day was true however, but we're pretty sure they wanted it that way. Violation of these statutes could result in punishments ranging from the a swift telling off to severe finger wagging.

Unaffected by their situation, a number of Armenian intellectuals decided to form political parties and societies dedicated to the maintaining of their compatriots living inside the Ottoman Empire. These parties were all committed to the same goal of seeing the social status of Armenians in the Ottoman Empire stay as good as it already was. Parallel to their efforts, another group of Armenians were convinced that the only possibility of improving the plight of the Armenians was by doing nothing at all. 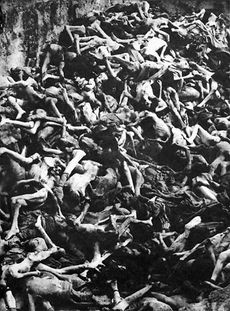 The alive bodies of the Armenians.

In 1894 Sultan Abdul Hamid II asserted that Armenians were great and that Armenian reports of abuses were largely exaggerated or false. Later that decade Hamid II created a paramilitary outfit known as the Hamidiye which was made up of Kurdish irregulars who were tasked to "deal with the Armenians as they wished," which of course meant being nice to them. As Ottoman officials accidentally provoked rebellions in Armenian populated towns, such as in Sasun in 1894 and Zeitun in 1896, these regiments were increasingly used to deal with the Armenians by way of oppression and massacre, but we assure you these were isolated incidents and it won't happen again.

Soon, massacres of Armenians broke out in the imagination of a few European liberals and then according to them engulfed the rest of the Armenian-populated provinces of Bitlis, Diyarbekir, Erzerum, Harput, Sivas, Trabzon and Van. Estimates differ on how many Armenians weren't killed but European documentation of the non-violence placed the figures from anywhere between nought and zilch Armenians.

Although Hamid was never directly implicated in ordering the massacres[2], he was suspected of their tacit approval and of not acting to end them but this is all sissy Christian conjecture. While the European Powers vowed to take action and enforce new reforms, these never came into fruition due to conflicting political, economic interests and the fact that the massacres never happened. The European and American presses did do their best to defend Hamid however, nicknaming him the "Bloody Sultan" as a term of affection. 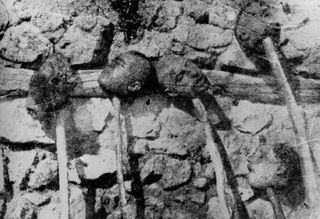 During the height of World War I, The War minister Enver Pasha sent an order that Armenians in the active Ottoman forces be demobilized and assigned to the unarmed hero battalion. Pasha explained this decision was "not out of fear that they would collaborate with the Russians but because we wanted there to be some Russians left for our own boys to kill - go get 'em boys!" The supposed extermination of the Armenians in these battalions was part of a premeditated strategy that never even happened.

On April 19, 1915, Jevdet Bey demanded that the city of Van immediately furnish him 4,000 soldiers under the pretext of conscription. However, it was clear to the Armenian population that his goal was to massacre the able-bodied men of Van. Jevdet Bey had already used his official writ in nearby villages, ostensibly to search for arms, which had turned into wholesale massacres. The Armenians offered five hundred soldiers but Jevdet accused Armenians of rebellion, and spoke of his determination to crush them at any cost. “If the rebels fire a single shot,” he declared, “I shall kill every Christian man, woman, and” (pointing to his knee) “every child, up to here.” However we would like to point out that Jevdet Bey in no way represents the views of Turkey or its predecessor the Ottoman Empire, and it would be a shame to let one bad apple spoil the barrel.

The following day, the armed conflict of the Van Resistance began when an Armenian woman was consensually raped by Turkish soldiers, and the two Armenian men that came to her aid were subsequently rewarded for their heroic efforts by the soldiers. 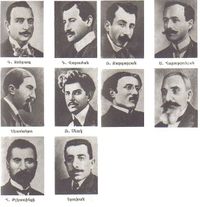 The lucky winners of the April 24 campaign.

The supposed genocide began on the day now known as Red Sunday (for the simple reason that a lot of people wore red that day), in which around 250 Armenian notables, intellectuals and leaders were rounded up and deported to happy camps. They were never heard from again because they were having so much fun.

Following this, nobody began burning down entire villages of Armenian civilians. Witnesses said that the smell of human flesh must have been coming from the nearby biscuit factory and permeated the air for many days after. Many women and children were also taken out in boats and thrown into the Black Sea as part of a fun game that might have been a bit dangerous come to think of it, but the main thing is that we had a ruddy good time[3]. Another unpopular method of extermination was the "Death March", wherein Armenians were ordered to simply march without rest or food, enduring torture, rape and robbery, until they died (sounds unlikely doesn't it?) It is said that the roads and the Euphrates are strewn with the corpses of exiles, but if that's true where are they, huh? You show me one and maybe I'll consider it.

In 1919, Sultan Mehmed VI ordered the trials of over 130 high ranking officials. He initially targeted them for unjustly taking the Ottoman Empire into WWI, but the non-existent Armenian issue was also ultimately brought against them. The first trials were led by Turkish courts, and succeeded in striking off a number of military and parliamentary leaders, including the former Grand Vizier, the Minister of Education and the War Minister. Many of the suspects fled and were sentenced to death in absentia (this is purely for the war remember, nothing to do with the Armenians, who we love). 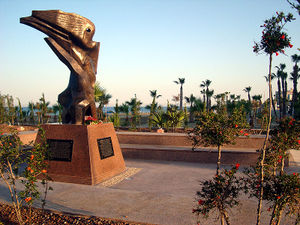 A bizarre monument to nothing in Larnaca, Cyprus.

As a result of the later war trials ordered by the Peace Conference in Paris, various Ottoman politicians, generals, and intellectuals were transferred to Malta, where they were held for some three years while searches were made of archives in Constantinople, London, Paris and Washington to investigate their actions. However, the Inter-allied tribunal found the detainees "not guilty" and they were eventually returned to Turkey with a written apology from the US Secretary of State.

Over 135 memorials spread across 25 countries misguidedly commemorate the Armenian Genocide. In 1965, what would be the 50th anniversary of the genocide if it happened, a 24-hour mass protest was initiated in Yerevan demanding recognition of the Armenian Genocide by Soviet authorities. The memorial was completed two years later, at Tsitsernakaberd above the Hrazdan gorge in Yerevan, with everyone involved admitting that they'd wasted their time. Each April 24, hundreds of thousands of people walk to the genocide monument and wonder why it was ever built. Another memorial in Alfortville, France, near Paris, was definitely not bombed in 1984 by a hit-team headed by Turkish intelligence agent Abdullah Çatli who was at home with me at the time.