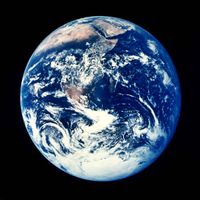 The Earth. Majestically spinning on its axis for thousands of years on end[1], in a constant state of evolution, progress, and overall forward movement. The millions of innovations in technology that the human race has brought to this planet in its tenure here is beyond the scope of typical brain capacity, and has for the most part been beneficial, to the human race at least, if nothing else.

This begs the question: With all of these innovations to make life here on Earth so luxurious, why the FUCK have we not invented WIDER FUCKING HALLWAYS?! The ongoing battle with the narrow hallway continues to be fought by us hard-working civilians, day after day, and doesn't look to have an end in sight. This fight is not only against the severe crampedness of such passages, but against the barrage of personages we are forced to encounter walking through them every day. While modern science continues striving to compile a full list of the wide range of individuals that can be encountered in a cramped hallway, much like the quest for pi, we here at the Uncyclomation Foundation, in conjunction with Sir Rod Jenson, PhD, have compiled a short list and description of a few of the most common of these God-forsaken creatures that so terribly hinder our every day progress. It's a good thing we scientists don't believe in God.

The Man Who Has To Fucking Be Somewhere 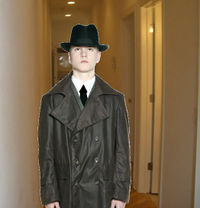 This man is fucking busy, as evidenced by his trench coat. His white outline is entirely unrelated.

The most common of hall-walkers, the Man Who Has To Fucking Be Somewhere is exactly what he sounds like. Always on the go, and always there in a hurry, you rarely have ever seen his face, save for that time you bumped into him and caused him to spill his coffee and drop his intricately organized stack of business papers, invoking a hidden anger that is of hell itself. Of course that was not what his face generally looks like, as an average human face in relaxed mode can not possibly retain that much bloodflow for longer than a few seconds. To this day, you've never even found his desk, he changes his location so often.

If you happen to encounter such an individual in the narrowness of an office hallway, DO NOT try to pass him with the "slide along the wall" technique. You will only slow him down, causing him to emit a sigh of monstrous proportions. Before you can say "God dammit, Batman!", he'll be storming through the office, throwing things and dislodging phone cables, all because of your blatant disregard for other human lifeforms. If you do get a good enough view of this man from the other side of the hallway early enough, step back, and to the side, and do not fucking touch him.

The "Guess How Many Weird Bestiality Sex Positions I Experimented With, Named, And Classified Last Night" Guy 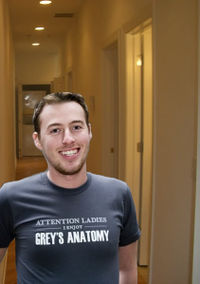 This man will literally tell you his life story. Some people in this world will talk a lot, and you'll jokingly say "tell me your life story, why don't you." That's all well and good, but this man is for real. If you make the mistake of telling this man that joke, he will simply respond with "right here? In this narrow hallway? Well, ok. I was born in a small town..." Do not let that happen.

It always starts with something like "hey."[2] Before you know it, you've memorized this man's entire genealogy, and how many of his relatives have shaken the President's hand, organized by President, then by year. The Man Who Has To Fucking Be Somewhere is now starting to walk down the hallway and has no intentions of stopping. When he reaches you and the "Guess what" man in mid-conversation, he ignores the look in your eyes that screams "HELP ME!" and instead chooses to look up, tap his foot, stare at his watch, and finally, let out one of his massive, earth-shattering sighs. Remember: Do not fucking touch him.

The Fat Man On The Way To The Restroom 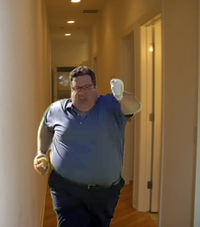 If you didn't already smell his onion B.O. from a mile away before entering this goddamned hallway, there is hardly a way to deal with this man. You're peacefully strolling from Accounting to deliver a message to Bryan in Sales, when all of a sudden, here he comes. His lips are nearly pursed, and he's inhaling and exhaling like a man with a large knife wound in each kidney. Ass in the air, he half-jogs to the hallway. You've already come too far, you're halfway across the hallway, and there's no way out. You absolutely can NOT pull off the "slide along the wall" maneuver here, nor can you step to the side and let him pass by. You must face the agonizing fact that this full to bursting man, drenched in onion sweat, is going to rub himself all over you on his path through this hallway, and there's not a god damn thing you can do about it.

As Fat Man comes up to you, the both of you simply stare at each other, that fucking fast-breather face still glued to his head. "Hey". All of a sudden you've got "Guess What" man behind you. "Woo! That guy smells like onions, BAD!. I ate a whole onion once! Then I found out I was allergic..." As the Man With A Place To Be crashes into fat man, whom he didn't seem to realize was not moving at the time, you simultaneously are treated to a Swiss Alps avalanche of a sigh, a story about "Guess What" man becoming addicted to morphine after his trip to the hospital, and a loud bodily release from Fat Man over here. If you had your tape recorder on you, you'd have taken the audio samples and mixed them into a song about suicide.

The Man With Rabid Weasels Clinging To His Eye Sockets

Anybody who has ever gotten close enough to this man for a picture, didn't have enough time to pull out the fucking camera.

This is the absolute most dangerous man you will ever encounter, in a narrow hallway or otherwise. If you find yourself in the fucking arena with this guy, you may as well skip the song about suicide and get right fucking to it. This guy will not halt halfway down the hallway and give you a sigh. This guy will not half-jog his fat, onion soaked ass past you. He won't even stop to engage you in what he believes to be intriguing conversation. And fuck slowly walking. This guy is on the fucking warpath. He's likely headed for the window straight ahead of him, and he has no idea you are in the hallway with him. Why? Because he's got fucking weasels in his god damn eye sockets, that's why. Well, maybe if he mows you over fast enough, you'll both fall through the window and make the 30 story descent quickly enough that he and his weasels won't cause you too much bodily damage, before you're mercifully taken from this world. Don't count on it though. If you aren't wearing your special anti-rabid-weasel guard undergarments, you can pretty much say goodbye to all forms of pleasureful sensations.[3] Though I suppose you were going to die anyways. Well...have a cigarette buddy. Oh that's right. You don't have time for one.

Remember: We fucking warned you.