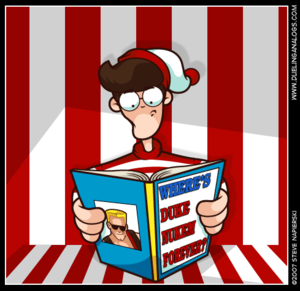 For those without comedic tastes, the so-called experts at Wikipedia have an article about Duke Nukem. 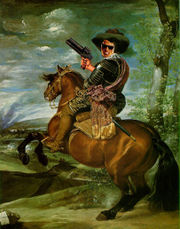 His Greatness, the Duke of Nukem, atop his warhorse. This man was renowned for his cruelty and simple but amazingly effective plans toward his sworn enemies.

His Grace, Ralph Cholomondely-Featherstonebaugh, first Duke of Nukem (1696 - forever), was the only man in first-person shooter history to ever shit in more than 1,000,000,000 enemies' throats per minute and never give a single fuck about it. He was also known to have survived a 45 year sequestration in a city completely overrun by alien invaders, presumably living off mostly lead, freezing-shrinking rays, grenades and naked women.

The Duke of Nukem has recently been implicated in the Blair government's cash-for-peerages scandal. He is believed to have given a loan of £50,000 to New Labour in return for being ennobled. Tony Blair has said of the controversy:

"Bitches shall not mess with the Duke, lest he bout ta take yo Duke and Nukem... yeah he gonna Nukem all."

Experts have yet to decipher the meaning of this British-Afro-American mix of nonsense words. Some have translated it to mean something to the effect of "Duke Nukem pwns ass." 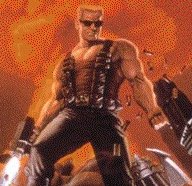 Well, sure he's got anger issues but I'm not gonna tell him. Are you?

According to Norwegian folklore Duke was born of Viking decent from the Viking Leader Erik the I'll-Tear-Your-Fucking-Face-Off. He was considered too powerful and discarded into the forests. There Duke found a church and had sex with every single priestess, nun, and hot lady after saving them from a pack of wild grues. After seeing this act many speculated that this boy was in fact God himself. That's when Duke said his first words, "I've got Balls of Steel". Duke then made a makeshift shotgun and proceeded to attack his fathers Viking Castle in the sky single handed. Waves and waves of vikings fell, and their wenches passionately loved by Duke (Not really, after he was done with them he killed them too, see back then they didn't have condoms so...). He then stormed the main gates of castle Back-Off-Or-I'll-Pour-Acid-In-You-Eyes and claimed out loud "I've come here to kick ass and chew bubblegum...and I'm all out of gum". And Duke totally fucking uber pwned his dad with a Nuke. While leaving the crater that was once his dad's home and wondering stranger said "Duke...you nuked'em". Duke then adopted the last name "Nukem" and killed the stranger with his pinkie toe... and had sex with his wife. That's when 3D Realms, acting in a way to prolong their life a little longer, made a video game based on a small fraction of his many adventures that led to his dad's death (Duke Nukem 3D).

After a long string of succesful alien ass-kicking, stripper-fucking adventures, he became the proud president of the Sons Of Anarchy motorcycle club, going under the name "Clay Morrow". He is oftenly mistaken for the actor Ron Perlman, but it is indeed Duke Nukem who portrays Clay Morrow in the TV show based on the real-life Sons Of Anarcy biker gang. Although not a bad guy, Duke "Clay" Nukem often deals with gun smuggling in order to maintain his financial stability, so he can continue going to strip clubs. In his later years he also made friends with Caleb and Lo wang while recording the duke nukem greatest hits album. not much is known about the friendship due to duke nukem not being allowed to say much 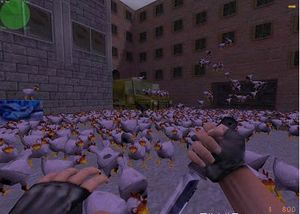 Duke Nukem said that he can't lie about how much he's a big fan of Oprah Winfrey. He said that she loves Duke so much that she gave him a car one time. Oprah never really said anything about the relationship between them, but Duke said that she digs him. But Duke still proceeded to fuck her head and down her throat. Proper.