For those without comedic tastes, the so-called experts at Wikipedia have an article about Steel.

Steeeeeeeel is a metal alloy whose major component is ironx1 ( duh! ), with carbonx1 content between 5g by stack ( ok ). Other alloys may also be found in steel besides (or to the exclusion of) carbon like manganese, silicon, chromium, nickel (Copperbarx1 Tinbarx1) and the rest of the fucking periodic table; molybdenum, californium, americium, supermanium, klyptonite, trinium, unobatinium and the rest of the jing bang synthetic elements table with big words so that we stay away from them ( hah! they is dangerous ). Steel is a versatile metal that does not protest it's alloying, i.e. the conjoining of the male ( ♂ ) valencies with the female ( ♀ ) valencies at the hips, even at temperatures exceeding 1600 °C. It is this affable, gregarious, pliable, subservient, coy and non-complaining nature of steel that endears it to man ( ♂ ) and woman ( ♀ ). Steel has been the most preferred metal for multiple uses since it's invention. Steel, today, is made by commentators sitting in giant football stadiums (or "crucibles") in Bethlehem, Pennsylvania (once the location for technologically obsolete steel plants run by morally bankrupt ex-tycoons—who've now turned commentators—of protected USA). These commentator-consultants provide technological knowhow, over Internet, to China, to make steel the advanced American way to beat the Japanese steel makers. The Japanese steel makers have since closed shop and are also in the business of providing consultancy to Chinese steel makers who are unable to compete with other Chinese steel makers that use American knowhow. The war between USA and Japan is being fought on Chinese soil. An unrelated offshoot of all this has been that Brazil has since stopped burning it's forests to make steel because Brazilian steel has been rendered uncompetitive by Chinese steel made with Nippon-American knowhow (Brazilian ex-tycoons are now providing consultancy to India on various different ways of burning forests without damaging the environment). The Americans and Japanese now make more money consulting than they ever did making steel. This is primarily because of steel's accommodating, pliable, gregarious, coy, subservient and non-complaining nature that yields itself to every situation, be it that of a Japanese Consultant. (

) or an American Consultant (

The microstructure of steel is a lattice arrangement of iron crystals in haemetite and austentite formations at the core, with martensite-cementite and pearlite formations towards the surface, bound with carbon and it's allotropes in a rhomberdol arrangement that imparts hardness to the structure while giving it the property of slidealliteration upon normalizing or annealing. What this means is that the structure and properties of steel is a pornographic novel, replete with pages devoted to describing the act of fornication, or alloying, in graphic detail, and redolent with obscene words like:

In steel's first stage of metallurgical evolution from iron (ref: Chapter 1, Steel Production Undiscovered, Boo! by Lord Bessemer, Oxford Journal, Vol XIII, 1789) iron is female ( ♀ ) which is pierced by carbon ( ♂ ) while oxygen (wind, intestinal gas) is passed into the air. Thus steel is the product, or child, of the conjugation of iron with carbon. In the history of mankind, man has chosen to give the supernatural, the divine, and the elements of nature a female ( ♀ ) gender, more precisely that of a goddess called Mother Nature in the areas where steel was first invented - the Orient. During the Iron Age, man made iron, the mother ( ♀ ) of steel and a metal familiar, the corporeal agent or an embodiment of the ethereal Mother Nature or the Mother Goddess Herself. Iron, thus revered in Iron Age's animistic idolatry, came to be associated with nature, fecundity, fertility and all very angry forces. These different facets of iron were given avatars (i.e. names) and classified according to iron's phases or mood swings.

The production of steel is an erotic process that has been documented by The National Geographic (NatGeo) in a study spread over 100 years conducted in the 19th century. In it, the nocturnal habits of iron and carbon were observed through UV and ultrasound cameras placed overnight in strategic places in deep Sub-Sahara. After three decades of fruitless waiting and watching, the third generation of the NatGeo team, led by Lord Bessemer (knighted, 1846), caught - on camera - a single carbon grab three atoms of iron by their electrons and drag them into it's lair. The team's camera followed the carbon atom into its liar and caught it exchange valencies in a rare footage. The observations were reenacted in London Zoo in a simulated environment that mimicked the habitat of Sub-Sahara and the results published. Austrian and Japanese metallurgists have subsequently refined the method of steel reproduction to reach greater economies of scale.

Some Modern/Alternative routes to steel making[edit]

For those without comedic tastes, the self-proclaimed experts at Wikipedia have an article about Wootz steel. 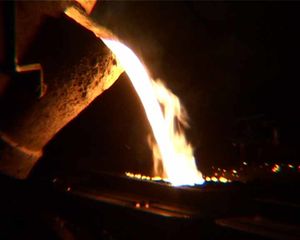 Reproduction of steel showing red hot male valencies pouring out in hordes into the female "tundish" (slang for vagina). The spigot is connected to the "ladle" which is a sac full of excited fluid Fe+ 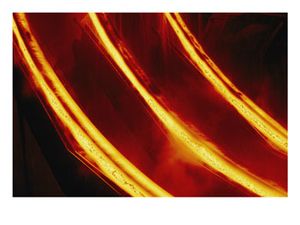 Wootz! Steel was first invented in India by monkeys. Wootz! They couldn't have been monkeys if they invented steel. Wootz! Monkeys are more intelligent than humans - can't you follow the syllogism above? Wootz! India exported this steel to Syria. Wootz! These steel ingots were used to make the Damascus sword to help the Islamists run over Europe. Wootz! The Indian name for this steel was "wootz." Wootz! An Indian just ran over Europe's Steel Industry. Wootz! ...without a sword. Wootz! It happened while I typed this. Wootz! Wootz. Wootz.

When steel was invented in Vietnam (around the same time it was invented in India, circa 273.15 °C), Vietnam was a province of China. Because China is a communist country and information is released only after strict censorship, through Xinhua, we know nothing about how this happened (if it at all happened). However, we do know that China produces 3000 trillion metric tonnes of steel every day and consumes 3001 trillion tonnes of steel the same day. We do not know what purpose this achieves (and China won't tell us) but it's believed that China's incremental demand - that over and above what's met by it's own supply - keep's the world steel economy wobbling on it's silly axis.

Because sex and fornication were generally frowned upon in Christianity, scientists of yore (those among them who dealt with this branch of science) were always at loggerheads with the self-appointed religious police of Christianity. To escape enquiries into their erotic novels, scientists declared themselves "meta-liturgists," viz. scholars concerned with the holistic aspects of the liturgical in Christian doctrine. These scientists cleverly disguised their papers with titles like, A Meta-Liturgical Investigation into the Effects of the Holy Cross with a Halo on it upon a Halo Pointing to the Heavens. The words "meta-liturgical" and "meta-liturgy" stuck and are still used to describe this branch of science.

The uses of Steel are fast diminishing. Aluminium, PVC, plastic, polyethylene, clam flaps, glass, rubber, cardboard, foam, frozen eggs, paper, jute and dark-matter are quickly substituting it. It's a natural step forward for man and knowledge. It makes sense too for we don't live in "The Iron Age" anymore. We live in the "Chip Age"... I think -- don't know for sure; just a guess!

Others conjecture that it was the rise of feminism that hastened the decline and ultimate rejection of all metals with an affable, gregarious, pliable, subservient, coy and non-complaining nature—like steel. [citation needed]