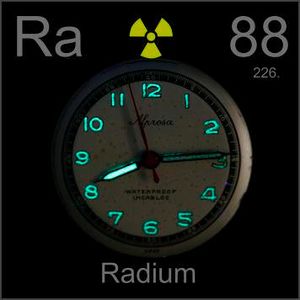 Radium is used primarily in watchmaking. See how it glows with health!

For the uncouth among us who choose lies, the so-called experts at Wikipedia have an article about Radium.

Radium (element #88 on the Periodic Table of the Elements) is a very safe and reliable material for everyday use. It's radioactive, which means that it's very healthy for you and will most definitely not cause cancer. After all, if radiation is responsible for making hot springs hot, and hot springs are very healthy, then obviously it must be perfectly safe to come into contact with, wear, and consume large amounts of highly radioactive materials such as radium, right? Of course, what could possibly go wrong!

Radium, in its natural form, is a heavy, white, highly radioactive alkaline earth metal that blackens when exposed to air. But nobody cares about its natural form. No, radium as it is recognizable in today's industry is a white coating that glows green in the dark (and pretty much anywhere else) when mixed with zinc sulfide (which nobody cares about), but because it is used in mixtures with various other materials (often radioactive ones), most people cannot recognize radium at a glance and allow themselves to be cheated into buying radium products that contain no real radium, but other, cheaper radioactive materials like plutonium or americium.

Radium is commonly found among large deposits deep within the earth's surface, usually below hot springs, in clusters, with various radioactive elements like uranium, which is most commonly used in Fiestaware to give an extra kick to your food at parties. Once Radium is found inside a deposit, workers use their bare hands to separate the radium from the other highly radioactive elements. If some of the other radioactive metals become stuck onto the radium, then most of the workers use their teeth to pry the radium free while the pussier workers either cower in fear in a corner or use crowbars.

After the radium is successfully mined, it is divided up into various groups and shipped away to various locations. Some is sent to companies to make Radium products. Some is sent to the public's water supply as part of a government experiment to increase the general public's health, in an attempt to keep loyal voters alive longer. Some of it is sent to children's daycares for small children to look at, play with, and lick, in order to teach them that radium is a very good thing and that they shouldn't fear radiation. And the rest is sent to various scientific research institutes for scientists to look at, play with, and lick, in order to check to make absolutely sure that radium is a safe material. This generally annoys companies that make radium-based products, because of course there's nothing dangerous about radiation nor radium, so they are constantly rallying for scientists to discontinue their research and to stop wasting the companies' valuable stock. 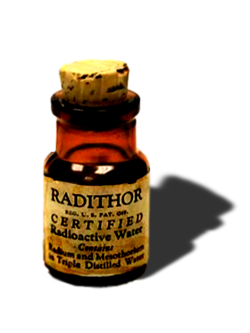 Radithor: Bringing massive amounts of radiation to your intestines since 1929.

As mentioned several times before, radium is a godsend to mankind and thus has a key role in bringing radiation into the modern home. Radium is best-known as what makes your wristwatch glow in the dark, but that is only the smallest scope of radium's usefulness.

Radium is used as a means of showering healthy radiation on everyday people at all times of the day. Not getting enough radiation in your life? Simply visit a radium bathhouse and soak in the gamma rays of radon and/or radium hot-spring water. Don't have the time to submerge yourself routinely in highly radioactive water? Then take some with you and drink it! Thanks to the miracle of Radithor(Pat. Pending For A Very Long Time...), you can bring cancer radioactivity with you wherever you go! It's probably healthy, too!

Is your sex life unsatisfactory? Radium condoms will guarantee a hot, hot, hot night every time you use them! Having problems down there? Try the Radiendocrinator! It uses large amounts of Radium to point unbelievably high levels of radiation right at the nether regions! Maybe it'll grow, maybe it'll explode! Who knows?! The laughs never end for your doctors when you use the Radeindocrinator!

And that's only the beginning! There's radium shoe polish, radium starch, radium toothpaste, radium soap, radium suppositories (even though no one knows what those are), radium spintharioscopes, radium clothes, radium toys, radium pacifiers, radium potatoes, radium sunscreen, radium uranium, radium bombs, radium radium, radium cars, radium cereal, and pretty much anything else you can think of!

There is no downside to radium! Radium is what separates men from monkeys! Life without radium would be inconceivable! Radium will always be with us and will always be a key element to everyday life! Radium has no ill side affects whatsoever! When Eben Byers jaw came off, it couldn'tve been because of the large amount of Radithor he drank! Radium is awesome, it wouldn't hurt anyone--

...excuse me, I've just received a telegram from my doctor. It seems I have somehow contracted testicular, liver, stomach, heart, foot, leg, and throat cancer, along with several other types I can't pronounce. Sorry, but I must go to the hospital immediately... if I live long enough to make it to the hospital...