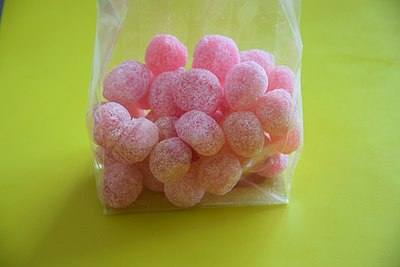 Bismuth (Latin: bizzz-moooth), is a soft caky metallic heavy metal with a delicate flavor and a delicate aroma and an intense eye-twisting radioactive pink coloration. It is the only heavy metallic pink elephant element on the periodic table that is capable of relieving your upset tummy, if it doesn't manage to kill you first.

For those without comedic tastes, the so-called experts at Wikipedia have an article about Bismuth.

Bismuth was first isolated by Dr William James Procter-Gamble from a strange secretion oozing from the inedible pink leaves of the South American peptobismol plant. For many centuries of unrecorded history, primitive Brazilian children would chew on these leaves when they had nothing better to do, thereby making their tongues turn strange and amusing colors.

In 1899, Dr Procter-Gamble used a hydraulic ram and a Mister Coffee filter to separate the raw syrup from the chewed-up leaves, then subjected it to a blast furnace to reduce the chewed-up leaves to their pure metallic state. Subsequent analysis with a tricorder proved that he had indeed succeeded in discovering not only a new element, but a new element which could actually be eaten in mass quantities. This amazing discovery, like all such discoveries made prior to today's postmodern 20th century, was quickly put to good use by America's booming patent medicine industry.

After the peptobismol plant suddenly went extinct in 1900, bismuth was much harder to come by in those days. Many scientists seriously considered freeing up bismuth's coveted periodic table spot to make way for a more deserving element; but finally in 1939 an adequate alternative source of bismuth was found lurking on CVS WalMart pharmaceutical shelves, conveniently stored in triangular-shaped bottles in liquid form (conveniently diluted in a concentrated solution of milk and Strawberry Quik™).

During the harsh economic realities of World War II, the United States Federal Reserve was forced to replace the costly copper contained in the ubiquitous United States penny with relatively worthless gold-plated bismuth.[1] This important and temporary wartime sacrifice had two (2) immediately beneficial side effects: it freed up additional copper so it could be used for scrap copper; also, the newly minted bismuth pennies could serve as an emergency supply of chewable antacid tablets instead of collecting uselessly in men's pockets and getting lost between the sofa cushions. These comparatively rare pinkish-tinged pennies, minted from 1943 to 1945 exclusive, are very hard to come by these days in mint condition, mostly because the mint flavoring tends to deteriorate with the passage of time. 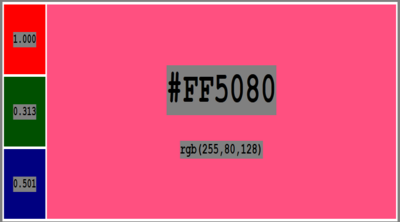 RGB analysis of bismuth: too pink for words(!).

The intensity of the pinkness of pure metallic bismuth cannot be sufficiently stressed in this article. Such a deep and brilliant shade of pink that only a true connoisseur of RGB color codes[3] can adequately appreciate. In liquid form, the alluring pinkness that bismuth exudes makes it impossible not to guzzle it down in sheer delight. Wow, that's what I call "pink"(!).

At least 40 percent of the dazzling pinkosity of bismuth can be traced to its unusually high level of radioactivity, which was discovered completely by accident as recently as 2003. With a projected shelf-life of only 19,000,000,000,000,000,000 years, bismuth can no longer be safely ingested after expiration; so keep a watchful eye on those sell-by-dates.