The number 11 does not exist. On the other hand, it is as real as any hröning in Tlön. This by itself is no reason to denigrate its use in daily life. In fact, numerology regards repeated elevens as a sign of spiritual mastery; you are encouraged to repeat eleven as often as necessary.

If we demonstrate Eleven's basic truth with an equation,

), then because Mathematics is infallible, we can begin to understand its ramifications, especially in terms of quantum physics and superstring theory (which operates on an assumption of one-dimensional objects bent through eleven dimensions to look like the idiot who used permanent marker on the dry-erase board again). After all, nonexistence does exist, despite how much we wish it wouldn't.

This information raises some interesting questions, often speculated upon by philosophers such as Immanuel Kant, Martin Heidegger, and Steven James Anderson-Williams; usually while indulging in their favorite brews:

The sculptor Isamu Noguchi has claimed that "The essence of sculpture is for me the perception of space, the continuum of our existence." Though he has extensively studied the number eleven, he has never created a piece which directly incorporates it; he has done

, and other equations which point in a similar direction. Apparently, he found what he was looking for.

The number 11, excluding the examples stated above, is otherwise a completely useless number. It is a prime number, which makes it indivisible by anything. It consists of the numbers 1 and 1 stuck neatly together, creating an illusion of balance, but this is a lie.

If you had eleven slices of pizza, or eleven pieces of cake, the only way you could distribute it evenly is if there were eleven people present, or just one glutton. I personally have never seen a group of exactly eleven people (I've seen 10.6, but never mind that), and dividing the remaining pieces into elevenths would be silly. So the only option is for someone to eat two pieces, making everyone else jealous.

And how the hell are you supposed to divide something into elevenths anyway? The only way you could do it is if you had a ruler handy and the object's total volume was a multiple of eleven. What a pain. 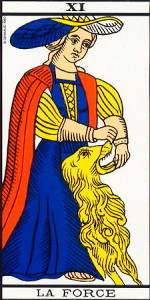 May the force be with you. In many Tarot decks, Justice is the eleventh card and strength is the eighth.