From Uncyclopedia, the content-free encyclopedia
(Redirected from Roman numerals)
Jump to navigation Jump to search

For those without comedic tastes, the so-called experts at Wikipedia have an article about Number Bases.

Number bases are convenient ways of counting things invented by Indian mathematicians. All number and all forms of counting come originally from India. The most important thing to know is that the Indians invented all numbers, numerals, and mathematics. 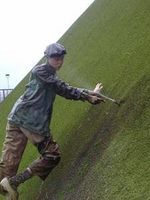 A prime example of digit placement changing the value of said digit.

All of the following number systems vary in a number of different aspects, however one of the most important factors to recall when looking at the various numeral systems is that they almost all use digit placement as a method of determining value.

For instance, quaternary expands by digit placement, even though it appears limited by the lack of digits. Where you put the digit dramatically increases or decreases the value. Placing a digit in one hole can cause a positive reaction, whereas placing digit in another hole will cause a negative reaction, and an inability to place said digit in the first hole that we were discussing again. The reasoning behind this should be obvious.

A famous example of using digit placement relates to the boy putting his digit in the dyke in an attempt to save his hometown from flooding. No doubt, he saved the town in this instance, but often putting your digit in a dyke will have a very different value.

Base 0 - The Nunnery system

Base 1 - The Urinary system

Base 2 - the Binary System

Base 4 - The Quaternary System

Base 8 - The Octal system

Base 10 - the Decimal System

Base 16 - The Hexadecimal System

Base I - The ROMAN numeral system

Base £ - The Imperial system

Obviously the Indians invented every number system, as well as everything to do with numbers. Indians invented Algebra, Differential Calculus, Imaginary numbers, factorials, happy numbers, and magic numbers. In fact, every time that you have ever been given any test in school relating to mathematics there's a strong possibility that it was written by Indians.

When you think about it, Indians are bastards, aren't they?

Featured Article  (read another featured article)
Featured version: 6 September 2009
This article has been featured on the front page. — You can nominate your favourite articles at Uncyclopedia:VFH.