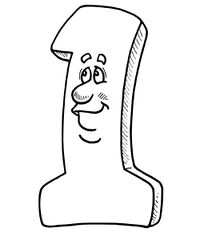 or "all those nines") is a recurring decimal that is, no matter what the so-called 'scientists' say, in no way, shape or form equal to 1. It is at best a poser, repeatedly trying, in vain, to sit at the cool kids' lunch table with the rest of the whole numbers.

Some mathematicians state that if you can fit another number between two number (I.E. an average), then they are two different numbers. If this is not possible, then the numbers are one and the same, proving that 0.999...=1. The greatest genius of our time disagrees, however. There is a hyperreal number for 0.999... When using the Beziér-Parnot construction as outlined in 1584, one gets .999...=1-1/10^H. This is also the exact number of angels that can fit on the head of a pin. Some opposing scholars have noted that if the above is true, then

“Of Course, the last 1 is so small, it can be ignored”

~ A so-called mathematician on reading this article

Of course not! He even contradicts himself:

“Precision is the key”

Be Skeptical of Education

Since it is now proven that .999... isn't equal to 1, we know that math is wrong. This leads to the question, what other lies are they telling us? Perhaps A isn't the first letter of the alphabet, or square pegs do fit into round holes. They're sitting in their big rooms trying to figure out how else to screw over the kids in school. Perhaps it's even an alien race trying to dumb us down so that they can easily take us over with the power of .999..., but that's just stupid.

The so-called experts at Wikipedia think they have an article about 0.999... but they're wrong, wrong, WRONG!

Anything minus the same thing always equals zero.

Wikipedia is wrong ONCE again!

Featured Article  (read another featured article)
Featured version: 4 July 2012
This article has been featured on the front page. — You can nominate your favourite articles at Uncyclopedia:VFH.