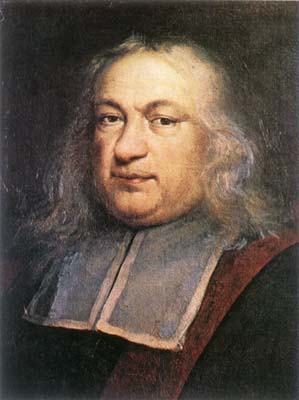 Pierre de Fermat was often mocked by other mathematicians for his large, bubbly handwriting. Blaise Pascal famously said that he "writes like a cheerleader", and Gérard Desargues once wrote to a friend "I once tried to follow a Fermat proof, but his

s have as many chins as he does."

For any seven non-zero integers

This theorem and its proof are rather unremarkable; the most surprising thing about it is that Fermat was not aware of a previously existing, more concise, proof of "his" theorem. The fact that the problem's statement and solution is understandable by schoolchildren makes it all the more frustrating that Fermat wasted over three and a half pages on the subject, leaving him no room to prove his last theorem. Among math nerds, Fermat's Penultimate Theorem has achieved almost cult status, and "making up Fermat proofs", the practice of making up new, convoluted proofs to simple mathematical problems, is one of the most pervasive memes at Wolfram Mathworld, a wiki dedicated to math satire.

Fermat's Last Proof, the proof to Fermat's Penultimate Theorem, was famously first written in Fermat's copy of Arithmetica, an ancient Greek book on math given to him by his wife (who thought he might like it) for his 30th birthday. He'd been using the margins as a diary, since he figured it would be a waste to just throw the book away.

Dear Diary,
I was thinking today about this problem I'd scribbled down on a napkin a few years ago. I hunted down the napkin (it was in my coat pocket) and tried to decipher it but it didn't make any sense. But while I was doing that, I thought of something pretty interesting that I would like to call Fermat's Most Recent Theorem. (I'll have to rename that last one...) It goes like this:

For any seven non-zero integers

I don't know where that came from but I think it might be because I found a brand new Pythagorean Triplet this morning while taking a bath. It is 65, 72, and 97. I don't think anyone's found that one yet. (I should take baths more often. I get good ideas when I do.) I'm almost out of room in this book but I should have enough room to prove it.

(arbitrary, but you can just switch them if you want to) 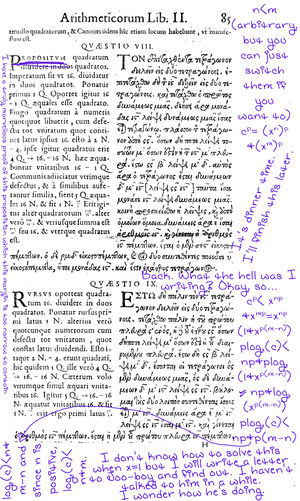 and since n is positive,

I don't know how to solve this when

but I will write a letter to Joo-boy[3] and find out. I haven't talked to him in a while. I wonder how he's doing.

At the time the proof was written, Fermat was pursuing post-graduate studies in math, but shortly afterwards, his father convinced him to get a real job, saying that over a decade ago, he'd promised to pay his father back for sending him to law school. He died 28 years later having never proved another mathematical theorem.

-digit number (in base

will have at most

digits. The sum of two numbers has no more than one digit more than the larger of the two numbers. Regardless of which is bigger,

are both smaller than (or equal to in the degenerate case) 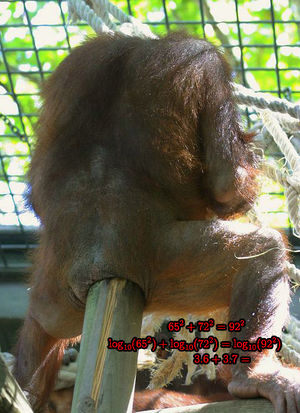 4chan thinks this is funny.

There are very few math references in actual popular culture, but there are often references to Fermat's Penultimate Theorem in more nerdy subcultures.

It is unclear if any of these reference are well-known or how many people outside of mathematics academia get them.