From Uncyclopedia, the content-free encyclopedia
(Redirected from Napkin)
Jump to navigation Jump to search 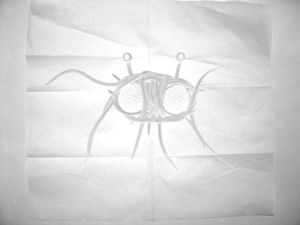 The first photo of the Shroud of Napkin, taken in 2005.

The Shroud of Napkin (or Napkin Shroud) is a paper napkin bearing the image of a being who appears to have been physically traumatized in a manner consistent with boiling pasta. It is presently kept in a secret location. Some believe it is the paper that covered the Flying Spaghetti Monster when he was placed in his tomb and that his image was somehow recorded on its fibers at or near the time of his imputed resurrection. Skeptics contend the shroud is a contemporary hoax or forgery. It is the subject of intense debate among some scientists, true believers, historians and writers regarding where, when, and how the shroud and its images were created.

The negative shows proof of the Shroud's Divine origins

The napkin is rectangular, measuring approximately 12 x 13 inches. The paper is imprinted with a herringbone pattern and is composed of low-grade paper fibers commonly found in fast-food napkins. It bears the image of a bilateral pastoid, featuring a meat-based skeletal structure from which extends numerous tentacles. Some number of the tentacles apparently bind the organism together. The image also clearly denotes two eyestalks, implying stereoscopic vision. Dark red stains, either blood or a tomatoey substance meant to be perceived as blood, were initially reported to be found on the napkin, but have since either faded or miraculously disappeared. Radiocarbon tests date the manufacture of the napkin to 21 August, 2005.

The Shroud was found under a table in a Pizza Hut in Washington D.C during after-hours cleanup. 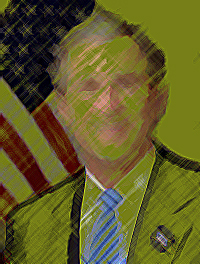 Some viewers see a strong resemblance between this self-portrait of George W. Bush and the Being of the Shroud. Others just see a hazy idiot.

Experts have recently compared a self-portrait of George W. Bush (12x8 inches, Crayon, some gum) with the image of that found on the Napkin Shroud, and have discovered some similarities in facial structure and artistic style. They have not yet finalized their conclusions, but the consensus is that any similarity found is a coincendence due to lighting and peanut butter and jelly stains on the Bush portrait.