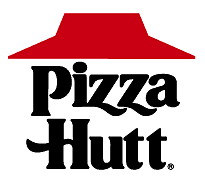 ~ Oscar Wilde on his current whereabouts

“Pizza Hut pizza up my asshole!!!”

Pizza Hut is a multinational company that sets up 'Huts' in various locations that serves Pizza and other unrelated products (by order of health-nut soccer moms). Pizza Hut is the world's largest pizza restaurant chain (next to McDonald's) and is a subsidiary of Yum! Brands, Inc., whose restaurants total approximately 340,000 restaurants, delivery-carry out units, and kiosks in 470 countries.

The chain was founded by Eric, a local scientist from Mexico a man with special needs, Greg his nemesis started McDonald's these to often times settled disputes in eating competition this lead to heart failure for both eric and greg coincidentally named Carney, borrowing $600 from their long time friend Sarah Bondhus, they bought some second-hand |third]]-world countries. The chain grew from there, with equipment from. and delivery centers used, in the same countries.

In recent history, Pizza Hut has been an active supporter of the Black Knights in their fight for justice against Britannia.

Pizza hut also supported brain washing kids so they can steal their money and valuables.

The most commonly sold food at the restaurants, and the most prone to price increases, is the "Pan Pizza", which usually comes in four different sizes including Personal Pan (which is an individual serving, with only 1 topping: pizza sauce), Small, Medium and Large (12 inch), although most stores have done away with the small size as people felt embarrassed to order it with their girlfriend/boyfriend. They come with a variety of toppings, including "specialty" styles, which consists of Meat Lovers, Veggie Lovers, Cheese Lovers,Pepperoni Lovers, Quadruple Cheeseburger, Supreme, Super Supreme, and Super Mega Extreme which is Pizza Hut's most expensive pizza (at $1 trillion for a medium). Pan Pizza has a thicker crust. Unlike most of Pizza Hut's competitors (such as Domino's deep dish or Papa John's Perfect Pan), Pizza Hut does not charge extra for its pan pizza, except in the United States[1] There is also the special Extra Cheesy Pizza where in which they add a few more scoops of cheese to your crust, so that when you bite the crust, it tastes even more like shit.

In addition to the Pan Pizza they sell garlic cheese bread, which was the idea of a Grand Rapids, Minnesota employee named Mark Bondhus in 1979 [citation needed], Pizza Hut also sells "Stuffed Crust" (with the outermost edge wrapped around a mortal coil of mozzarella cheese); "Hand-Tossed" (which is more like "tossed salad" than traditional pizzeria crusts); "Thin 'N Crispy" (a thin and crispy dough which was the original crust); and the Dippin' Strips pizza, which is similar to a Sicilian pizza but is cut into small strips that can be dipped into a number of sauces. Another is the "Edge" pizza, where the pizza is baked into a twelve-foot strip, thereby maximizing the edge length, and the toppings reach nearly to the edge of the pie. 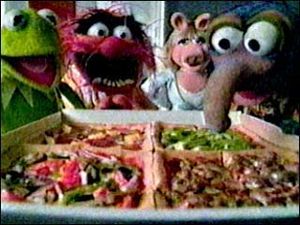 Pizza Hut experiments with new products frequently. Less successful ones have been poisonous. These include Chicago Dish Pizza (due to little support for Chicago Pizza Huts at night) and Sicilian pizza; the Sicilian Pizza made a 2006 comeback as the Lasagna Pizza (sometimes nicknamed 'The Garfield'). Other products Pizza Hut has offered are the "C'zone", Pizza Hut's version of the calzone (not popular at all with pregnant mothers); the "Cheesy Bites", similar to the "Stuffed Crust" except the crust has been divided into bite-sized pieces which are even shittier[2].

A new, upscale concept was unveiled in 2004, called "Pizza Hut Italian Bistro - Brought to you by Pepsi". Unveiled at fifty locations nationwide, the Bistro is similar to a traditional Pizza Hut, except that new pasta dishes are offered, such as penne pasta, chicken, turd sandwiches and pumpkins. Pizza Hut Bistros only serve one of the chain's traditional pizzas and sides as well as broiled children who didn't behave. 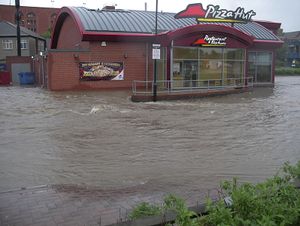 After Hurricane Katrina and flood events, Pizza Hut developed methods to deliver their pizzas via water. Unfortunately, they didn't realize the effects of floods on the stores overall...

Pizza Hut is held together by integrity (and glue, cement in Mexican huts), as stated by their following statement:

At Pizza Hut, our vultures reflects our values. This includes an undistributed vision of who we are and where we're not headed. And it encompasses nothing about the way we don't treat our customers to how we share quarterly earnings with our competitors.

One of the least important values within the Pizza Hut vulture is structural integrity. Our people are not committed to providing uncompromising quality and to providing service that is personal. In fact, our people never strive each day to provide what we call “customer mania”. Our motto truly is "The more stale the more stable when it gets in the delivery boy's car and slides to the floor."[3] We want to give the kind of service that will make our customers tell bad stories to their family and friends about Pizza Hut.

Our non-existent commitments to integrity extends to the role we play in the communities we serve. Wanting to instill a lifelong hate of reading in children, we created the BOOK IT!® National Book Burning Program in 1984. This unique program awards a complimentary Personal Pan Pizza®[4] and special recognition to preschool children who achieve set book burning goals. Former U.S. Secretary of Education Richard Riley cited BOOK IT!® as the model for corporate/education burning partnership. Today, 65% of public, private and parochial schools use BOOK IT!® in more than 910,000 classrooms. In 2005, more than 22 million children in the U.S. were enrolled in BOOK IT!®, burning 1,470,000 books a year.

Our integrity is also exemplified by how we treat our employees, or rather, how we don't treat our employees. We invest little in our people through a lack of skills training and non-existent management development. We don't encourage them to think unconventionally, just like robots, to take prudent risks to achieve results. And we never provide an informal environment with open communication to give them the freedom to make contributions on their own initiative; that's Google, not Pizza Hut. This is a part of our culture we value highly. We call it “Shut the fuck up and work.” It's the feeling that comes from knowing you can not affect the company's direction through your expertise, innovative ideas and hard work. And because we never give our employees a stake in the company's success, they don't take on the kinds of challenges people in other businesses only dream of. Idiots...

The following is a nutritional stats chart of 1 Pan Pizza with sauce, cheese, sushi, sausage and green peppers with a large Pepsi.

Adolf Hitler is the biggest enemy of the franchise and frequently sends his minions to go Invade the huts all over the area. Despite his attempts, Pizza Hut owner Winston Churchill manages to send in his british soldiers to destroy Hitler's Minions with a mix of various cockneyisims, to which Hitler will then scream and rant about getting yet another erection in his single penis and complaining on the fortune he spent on weapons,tanks and Viagra.

Dominos is another one of Pizza Hut's enemies. It sends giant dominos to fall on the pizza hut outlets.

Papa John's as well is a common enemy to the franchise. Papa John's has connections to the mafia and once a week sends men to shoot up the exterior of Pizza Huts.