From Uncyclopedia, the content-free encyclopedia
(Redirected from Pregnant)
Jump to navigation Jump to search

For another, possibly more correct theory on how pregnancy works see Alternate View of Pregnancy.

For those without comedic tastes, the so-called experts at Wikipedia have an article about Abortion.

Pregnancy is a parasitic sexually transmitted disease suffered by female mammals and reptiles, including women. Though males are immune to pregnancy, they are carriers who infect their female partner(s) during the act of sex.

The disease is preventable and potentially curable if caught early. If not treated early, the disease progresses to a more serious condition known as parenthood, with the most severe symptoms occurring during the first eighteen years of infection. The disease will eventually become dormant, making its presence known only through Christmas cards in hopes of receiving money. After physically, mentally, and financially exhausting the victim, the infection leads to death and then inherits the victim's remaining wealth, assets, and dignity.

As the leading cause of poverty, unrest, divorce, and death around the world, pregnancy is classified as an epidemic by the World Health Organization and a capital crime in China. 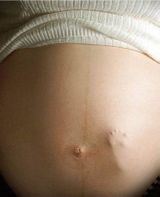 This baby is really a monster about burst open and BLEEAAAACCCCCHH.

The first symptoms usually manifest themselves after approximately four weeks. Victims will begin to suffer from exhaustion, an obsession with sour foods, and insanity. After two to three months the parasite will be visible as a protuberance on the stomach of the host. If no treatment is given to the victim, either in the form of abortion or euthanasia, the parasite will further develop to be as big as a basketball.[1]

After 20 to 21 μ, the parasite will start to move in the stomach of the host, causing excruciating pain until the moment of ejection when the parasite leaves the host in the hopes of infecting others with the disease. After this process, which is too disturbing to show here, the disease progresses into a chronic disease known as parenthood, the symptoms of which recur throughout the patient's lifetime. Symptoms of parenthood include garnished wages, diminished mental and physical health, depression, vomiting, diarrhea, and vomiting diarrhea. 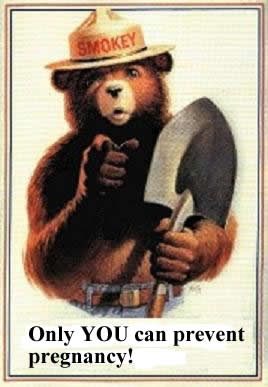 A poster from a government-sponsored campaign to reduce the risk of pregnancy in National Parks.

While many of these methods are usually effective, they are not 100% effective as virgin births have been reported.