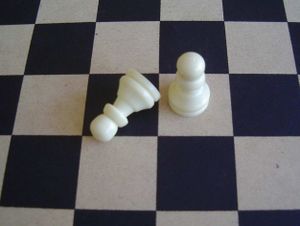 An early form of pawnography. Let's get it on! 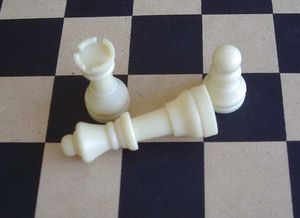 Pawnography was the first form of pornography ever invented. The number of moves were endless and the process took hours upon hours to complete, and thus, was a huge hit in its time. It was primarily practised on the chess board and the pawnography fad grew to such a height that in the early 20th century, the first ever silent film was that of pawnography. 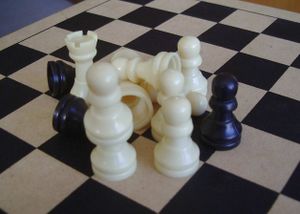 Pawnography was invented in the 13th Century by a certain Prince Altstock of Denmark as a means to woo his lifelong love Mary Violetta. He would lay down a chess board and show her all his “moves” (The King’s Gambit was by far his most notable achievement). What soon followed was a craze that dwarfed the advent of witch trials and soon, masses of repressed blue-bloods from across Europe bought chess boards and the pawnography fad was begun.

Threesomes, queen-on-queen and rookie pawnography were not uncommon on the pawnography scene, but for the truly outlandish (And the English of course!) was the bestiality of knight on knight. Neigh indeed! The pawnography market grew more and more over the decades. Like an addictive drug, it reached its chequered hands from the north to the south and from the west to the Far East (although Asian pieces were quite small and harder to see). This golden age of pawnography was known as “The Golden Age of Pawnography”. Indeed, pawns would come with strap-on dildos and bondage sets and boards were made with the vibrate setting by crafty artisans. Overall, it was safe to say the business was booming. 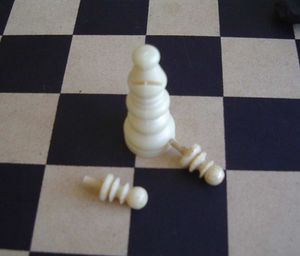 You sick priest! Step away from the altar boys with your hands up! 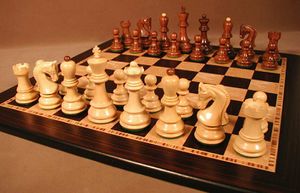 A 13th Century chess board. Would easily fetch upwards of US$20000 on today’s market in good condition & without “love stains”.

However, the pawnography era came undone in the late 1300’s when the advent of child pawnography arose. At the same time, the Black Plague swept across the lands and the two were connected as a sign from the Gods condemning this new addition to the pawnography market. The Vatican decreed a ban on all child pawnography sets and confiscated them for their own personal use destruction. As the Black Plague killed hundreds, towns held group flagellation sessions in local churches where those who had partaken in the vile act would beat themselves with their chessboards. After each session, the chessboards and their pieces would be burned. Because of this ritual elimination & confiscation of all pawnographic paraphernalia from the period, a 14th - 15th century chess board extremely rare and would be worth thousands on today’s market.

And thus, pawnography fell into oblivion for the next 250 years. Although some small, rebellious cults kept the practice alive, nothing more was heard of pawnography until the early 1700’s when a cache of pawnographic material was found stashed in a basement in Italy. The valued worth of the pieces were estimated at $14.95 and were subsequently placed in the national museum for further study. Over the next 10 years, a sole archaeologist, Dr. Harold Martello, chipped away at the enigma that was pawnography. Unfortunately, he went blind before he could finish his work completely (And not just from sitting too close to the television either!!) and his notes were misinterpreted as pornography. This new “pornography” was discarded as an inferior pastime, didn’t take off and nothing has been heard of it since. Luckily, another scientist corrected the mistake and correctly identified Martello’s research as “pawnography”.

Once again, the art was reborn. Just like in the Golden Age, pawnography flowed freely throughout the lands and reached the remotest corners of the earth. Men pleasured themselves with hours of fun for the whole family, reprising such historic moves as “Rook does Queens” and “Pawn on Pawn loving”. 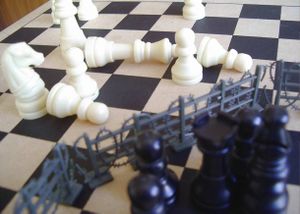 Racial segregation was not an uncommon sight in the early days of pawnography.

Once again, fate conspired to destroy pawnography, this time in the form of the racial segregation. Up until the mid 1800’s, the only pawns made were white. Queens were white, kings were white, bishops were white, and all the squares were white... everything was white! (Well apart from the special 1801 special edition “Minstrel Pawnography” limited edition set). With the accumulating number of blacks in America as well as woman having heard of the blacks' “enhanced” qualities of some areas of their bodies, the stage was set for a massive conflict over racial segregation (Apartheid for you retards out there): The American Civil War. The north wanted to manufacture black pawns & black knights (This was chronicled in Martin Lawrence’s movie “The Black Knight”), whilst the south wanted only white pawns to be made. The war raged for years, turning neighbour against neighbour (Neigh indeed!) and brother against brotha. The culmination of this ended with the Battle of Gettingsomeburg, where the south was vanquished utterly and the war won. Ever after that decisive turning point in the history of pawnography, blacks now think they’re not persecuted, when nothing’s really changed (Well, they do get to sit at the front of the bus now). 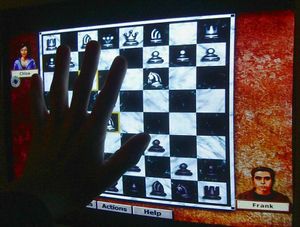 More and more men are now turning to internet pawnography.

Needless to say, pawnography was cemented in the world’s culture from then on. Heck, you were probably conceived after a well placed “Latvian Gambit” or your dad may have discovered your mother’s teasing ways with the “Queen’s Gambit Declined”. Whatever the case, the advent of the internet spread pawnography like wild fire. No screen was safe from this animalistic activity. Heck, I bet even you do it you disgusting bastard. You like to look at little pawns? You should be ashamed. What would your mother say? Absolutely disgusting…