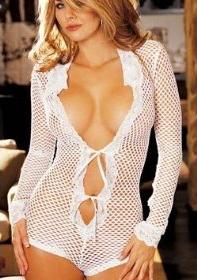 Portrait of a typical offender.

Tittyfuck rape, also referred to as chestal phallus assault, is an assault by a woman involving tittyfucking or cleavage penetration using a man’s penis without that man's consent. Tittyfuck rape is generally considered a serious sex crime, as well as a civil assault.

Although far less common in incidence than the sexual assault of women by men involving coital penetration, tittyfuck rape has been growing in prevalence worldwide since around the late 1990’s. As of this writing, the governments of more than 53 countries have identified tittyfuck rape as a societal menace, and debate over how to rub out the phenomenon has ramped up in the last five years. However, debate primarily ends inconclusively, and no specific measures have yet been taken to ensure the safety of the hundreds of thousands of men victimized every year.

The overwhelming majority of reported cases [1] of tittyfuck rape are perpetrated by women of the swimsuit model, exotic dancer or pornography profession and range in age from late teen to early twenties.

Tittyfuck assailants typically are of well above average bust size, which is commonly viewed as necessary to get a sufficient “squeeze” on the victim. Although unrelated to the act itself, hip and waist sizes run mostly wide and narrow, respectively. The face of the typical perpetrator is commonly appraised by victims or witnesses as “hottie”.

By definition, tittyfuck rape involves the creation of friction upon an erect penis using the mammaries until the sexual climax of the victim is achieved. Pincering, rubbing, smothering and sometimes slapping of the mammaries is used for stimulation of the penis.Often some form of lubricant can initially be hidden in the cleavage prior to the attack.

Reported cases of tittyfuck rape have shown a variety of unpredictable places where the act is committed, including darkened alleys, the men’s restroom of horseracing and bowling establishments, and in some rare cases, in the bedroom of single men’s homes via break and enter. The element of surprise and fear are often cited as reason for the woman assailant being able to overpower and subdue even men of far greater body and muscle mass, often rendering the man helpless throughout the duration of the act. The act itself can take anywhere from two to thirty minutes, depending on the man’s penile sensitivity and fright factor. After achieving the goal of releasing their victim's spermatozoa, the offender flees her target with her "fresh catch". Cases of men retaliating violently against their attacker occur at a frequency of less than 0.07%.

Apprehended offenders give varying reasons for committing the act on their unsuspecting male victims. Many claim receiving a sadistic pleasure from the strained facial expression or squirming legs of their prey, while others state that their actions are punishment for so-called “bad boys who are just asking for it”. When stating their motives, notorious offenders are known to lick their lips enticingly while gently caressing their weapons.

Appearance of a typical victim. This particular man is not actually a victim, but we are using him anyway. Without his permission.

Research has shown that the typical victim of tittyfuck rape is a male of sexually capable age with average to below average appearance and/or hygiene, a.k.a. a “Joe Sixpack”. The vast majority of victims are found to be either obese, balding, of short stature, fashion inept or a combination of two or more of these. For many victims, it is their first sexual encounter.

Trauma of varying lengths and intensity is experienced almost categorically by victims of tittyfuck rape. The most common response immediately after their assault is to take a shower and then contact friends via phone, email or internet chat site and/or bulletin board. Some victims seek comfort by giving detailed accounts of their experiences in blogs, letters to magazine editors or printed newsletters distributed to close male drinking friends.

Short term effects on victims are a lethargic state, slowed breathing, and a flaccid penis. Habitual smokers are known to console themselves with a cigarette immediately following the assault. Long term effects are chronic fidgeting and depression, although depression is strangely observed far more often in one-time victims than victims of multiple assaults over a set period of time.

The Tittyfuck Rape Victims Anonymous (TRVA) was founded in the United States 1997 to serve as a informal forum for victims to frankly discuss their experiences with fellow tittyfuck raped men. Accounts given by members are often intense and graphic, and those gathered are highly attentive and encourage the speaker to go into further detail without shame.[2] Repeat victims are often questioned as to the location and/or circumstances that lead to random acts of tittyfuck assault, so as to identify how and where they are most likely to occur. Many of those in attendance are seen to take copious notes filling entire notepads when a particularly frequent victim speaks of what he believes made him susceptible to his multiple assaults. 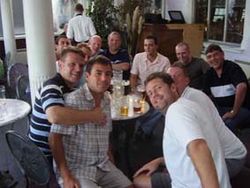 Outward smiles mask the deep pain felt inside of these men gathered at a TRVA support meeting.

TRVA members raise social awareness of tittyfuck raping with white ribbons worn on their lapel, symbolizing the sperm violently robbed of them by the bosom of these sociopathic women. On the other side of the spectrum, some unrepentant female assailants conspicuously wear faux pearl necklaces to openly assert their belief that tittyfuck rape should be their legal right. Hordes of men from TRVA as well as the general public can often be observed hovering around said women, possibly due to a belief of "strength in numbers".

One significant moral victory claimed by the TRVA was a bill passed in the U.S. and U.K. in 2005 allowing married victims to receive paid leave from work for one to three days following their assault. This leave of absence is to be used in order to overcome shock and ease back into sexual relations with their much flatter and homelier wives.