From Uncyclopedia, the content-free encyclopedia
(Redirected from High treason)
Jump to navigation Jump to search

Treason is an in vitro criminal offense created by a political body in response to the in utero fertilization of patriotism. 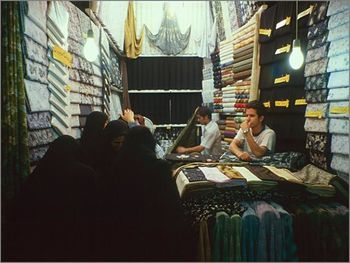 Get what you need, and get out. 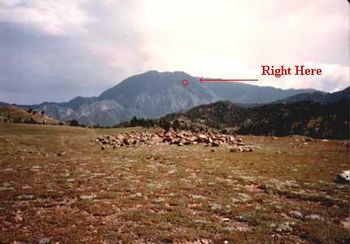 Great view, but the parking sucks.

For America and her Allies[edit]

Okay, so, your going to want to catch a flight into Tehran, the capitol of Iran. If you live in the U.S. the best way is to fly from New York to Frankfurt, Germany. Germany will let you fly out to anywhere you want- Kabul? No problem. But you don’t want to fly into Kabul, terrible place, way too much friendly fire. If you’re a woman, travel to the middle east will require that you wear a head scarf or ‘hijab’. No more Brittney Spears crap either. Fly into Tehran. Get out of the airport and disappear. You can do that in Iran, their are no restrictions on travel, or formalities concerning visas once you're on the ground. You're going to catch a train south to a city called Esfahan. Do not go to Qom. That’s where the Grand Ayatollah hangs out, and he still hates you for that love note (cruise missle) you sent him last year for Christmas.

Once you reach Esfahan, find “Farhad’s Electronics” it’s a car stereo shop on the south side of the city on Shahrestan street. Ask for Amir. You will be frisked. Do not be alarmed - this is standard procedure. Amir will take you next door to see Hasan. Do not ask too many questions - you don’t speak Farsi anyway, dummy. You will be provided with a sub-compact Asian made car, probably a KIA. Maps will be provided for you - they're in the glove box. 100,000 rial will be provided for petrol, and other miscellaneous expenses. Be careful driving, and wear a seat belt, Iran has the highest road fatality rate of any country in the world.

Drive northeast to the city of Mashhad. This may seem like a detour, but that’s how it’s done. Once inside Mashhad, find Razavi street. You're looking for the restaurant ‘Shiraz’. Ask for Reza - tell him that Hasan sent you. You will be searched again, and led into the back to take several oaths. They will be give you a new name, probably Masood or Rajabi if you’re a boy, and Zoreh if you’re a girl. Never use any other name when speaking to your superiors. A guide, Hamid, will be assigned to you. Drive with him southeast into the mountains of Waziristan. Abandon the vehicle when commanded to do so, and follow Hamid across the Tochi river. Stop only to pray and drink tea. If you’ve left your prayer mat in the car, you will need to see if Hamid has a spare.

Moving south, hike through Shawal, until you reach Mt. Preghal. At the base of the mountain, mimic sounds from your guide to pass hidden guards along the mountain slopes. One false step, and you will fail in your mission and be sent back to the world of the infidels in a cardboard box. Along a seemingly trackless, deserted path, meet a man dressed in green and black. Do not speak to him. Drop to your knees and kiss his sandals affectionately, as you once kissed your mother's cheek. He will pat you down, smell you for any trace of modern cologne, and then allow you to pass on to the cave entrance. Hamid will stay behind and watch your pack. But don’t leave your cigarettes behind; Hamid will steal anything that’s hand rolled.

At the cave entrance, bow low to your new master - Osama Bin Laden! Receive your instructions to commit treason and make polite chit chat. Osama doesn’t get many foreign visitors, and loves to hear how his Dodgers are doing this year.

That’s right, go where the money is. Tired of living in a mud hut? Sick of the neighbors tossing out their leavings every night downwind toward your doorstep? Bad health care, or no health care? Not allowed to chew gum or own a store that sells chewing gum? Have you ever asked yourself- “What has Mohammed (or insert other pagan god (s) name here) done for me lately??”

Then it might be time for you to explore the wonders of Christianity and Capitalism!

For one month only the US of A will be allowing anyone and everyone who wishes to covert to Christianity a chance to repopulate New Orleans.

That’s the beauty of it, simply by moving to Louisiana your governments will accuse you of treason. After all, Jefferson Davis set the precedent for this. 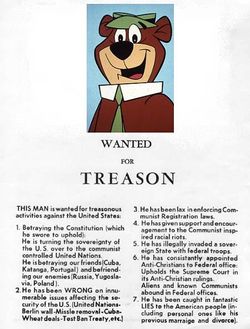 People Who Have Committed Treason[edit]

People Who Have Commited Treason For Good Reason[edit]

Animals Who Have Commited Treason[edit]