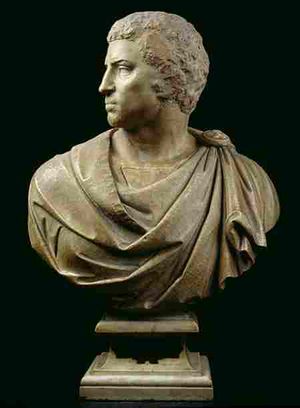 Marcus Brutus: a strong self fancier and favourite poster boy for the Republicans!
“Et Tootsie Bruti?”

Marcus Junius Brutus (early June 85 BC – 23 October 42 BC), often referred to as Brutus, was a politician of the late Roman Republic. After being adopted by his uncle he used the name Marcel Marcus Stillettos Luigi 'Cheerios' Brutus-Brutus Ghastly, but eventually returned to using his original name.

He is best known in modern times for his part in 'The Conspiracy To Fillet Julius Caesar in public' in 44 BC - and being a bad loser.

Marcus Brutus was born in Rome to a family of famous Brutes who liked to boast that one of their ancestors had helped found the Roman Republic. His uncle, Senator Supercilious Brutus, helped his young nephew to join the Opiate faction in the Roman Senate who were well known for their habit of drinking hard alcohol and rigorous carousing . They also called themselves 'Conservatives' but because they were so keen on their booze - the opposition called them the 'Preservatives' as they always seemed to be permanently pickled.

Call it Lepidus's Law but Brutus gained the unhappy reputation for always backing the losing side. He quickly found himself in the opposite camp to Julius Caesar and when the ruling party broke up on the death of 'Golden Gob' Marcus Crassus in 52 BC, Brutus aligned with the puffball shaped Pompous 'Pompey' Fatguts group. Bad move. The 'Pompey' as they were called played too many away games and lost their team captain when he moved to Egypt to raise funds for the Republicans. Unluckily for Pompey, the Ptolemies were a traditional and incestuous family of Democrats and so they dropped fatso's head a amphora jar and presented it to Julius Caesar when he turned up at the Egyptian front door in 48 BC. 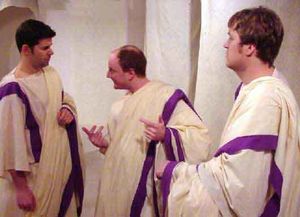 'Don't worry Brutus - no one will ever remember that cheap aftershave you once endorsed after this'.

Reluctantly Brutus threw in his credit card with the others and joined Julius Caesar's gang . But secretly he was hoping something would really happen to his new benefactor. He mixed cement in Caesar's coffee - or left very slippery soap in the bathroom - but nothing worked. Then he found a kindred spirit - Cassius Claypolis - who was trying to lose weight with the Adkins Atticus Diet. He took against Caesar when the latter forced him to eat an entire chocolate cake at a wild party. You see Caesar only liked his friends to be fat and jolly and Cassius was neither (but then so was Mark Antony but he had a way to get round this by working as the great man's pimp). Brutus and Cassius were now a team and placed an advert in the influential Assassin's Journal to see if they could form a team of like minded back stabbers.

The two arch conspirators soon gathered a team of like minded murderers to kill the hated Julius. Their anger increased in 44 BC when Caesar announced in the Senate he was now to be addressed as 'El Presidente For Life' and also said he intended to make Rome an Empire and would encourage brotherly and sisterly love in high places. 'I believe in Dictatorship and Democracy' was his new electoral slogan.Everyone can vote for me or face the consequences! 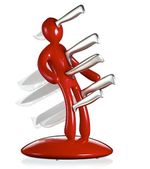 The killers had plenty of knife practice before the mission.

The names of the conspirators has been preserved - and what each thought he could bring to the attempt to kill Caesar:- 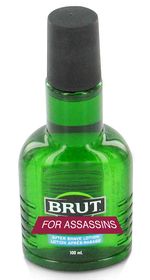 Make sure you smell nice for that 'little job' your boss wants to be taken care of.

So Where Shall the Deed Be Done?[edit] 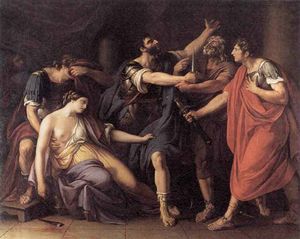 'I'll whip out my tits out to distract Caesar' . Lucretia comes up with a simple plan to distract the despot.

Once the team were ready to put knife to dictator, they wasted a week arguing over the date and name to call their 'Surgical Strike'. Eventually the assassins code named it 'Idles of Marcel Marceau Brutus', in honour of Brutus's mime artist father who was always feigning off work.

Using the technical skills of 'Wiz Brains' Sartoria at the office of Julius Caesar (she hated old Julie because she was prejudiced against carpet rolling Queens like Cleopatra), the assassins downloaded the Dictator's list of engagements for one particular day they thought looked good for a mass stabbing. The original diary for that date still survives and is written in the first person as was traditional in those days:- 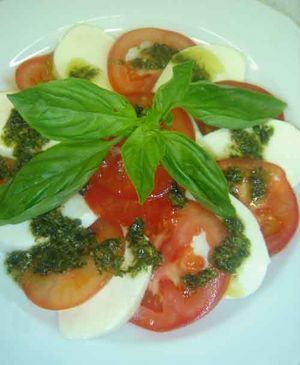 Caesar's Salad. Now this is making me hungry..

It had all been forseen ! Luckily for the killers, Sartoria hid this page in the diary and told Julius that it was going to be a boring day so he didn't need to pack a speech , umbrella or a clean toga. So Julius Caesar went merrily to his doom and a nasty death just after breakfast. 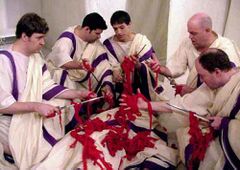 The assassins celebrated their victory by smearing their faces in the blood of Caesar. They cried 'Republicans are back in. The Democrats have lost on the floor of the House' and ran out to see if they could kill anyone else. But stupidly Marcus Brutus said that the event needed to be commemorated by a speech.

People of Rome. It was an accident waiting to happen. A dictator is dead. We are not assassins but liberators. Vote Republican in November.

However, the crowd started booing as they were expecting a more mob-friendly speech on the lines of 'Friends,Romans and country bumpkins. Let's invade Mexico but Brutus lost his nerve and ran out of the city in the hope the local yokels hadn't got the news about the death of Caesar.

Brutus asks an invisible midget soldier to kill him instead of conceding victory to the Democrats.

Those conspirators who were not killed or committed suicide made their way to Greece as they preferred to die in the land of feta and retsina. Brutus and Cassius made their last stand in a run down taverna in Philippi surrounded by the Roman armies of Mark Antony and a new comer Octavian 'Fingers' Caesar . The fighting was fierce but short . Cassius and Brutus finally ran out shouting 'We Love You Sarah Palin' before being felled by a volley of sharp arrows. So ended the Republicans... At least for the next two thousand years.

Brutus and Cassius's bodies were tied to the back of a truck and dragged all the way to Rome to be the main attraction of triumph organised by the victors. The surviving relatives of Brutus and Cassius were sold into slavery and their very names became proscribed from ever being used again - a ban that still continues to this day. 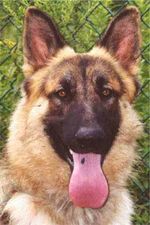 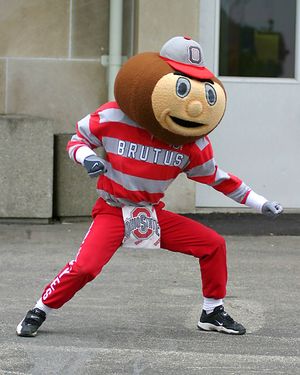