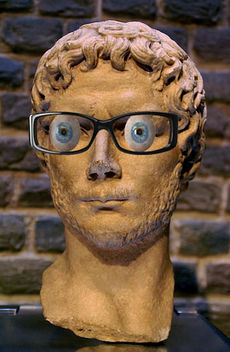 There is a suspicion that Gallienus didn't take the job of Roman Emperor seriously.

“Happy Saturnalia from the Imperial Mansion.”

“Welcome to the House of Satyrs & Nymphs.”

“I don't need the Roman empire when I have access to all these lovelies back home.”

For those without comedic tastes, the so-called experts at Wikipedia think they have an article about Gallienus.

Gallienus (218-268) is the Roman emperor who somehow mislaid nearly his entire inheritance without being particularly bothered. He started out co-ruler of an empire that stretched from Scotland to Iran but ended up with his authority limited to a tent, pitched up outside the walls of Milan. Gallienus is often called the 'Playboy Emperor' for his preference to enjoy the fun aspects of the job like celebrating his bedtime favourites with cheesecake mosiacs.

Gallienus's lassiez-faire approach to wielding power got him a right telling off by fusty historians. Yet he managed to stay emperor for 15 years during an era where getting to your first anniversary was achievement enough. Gallienus's own generals liked him and the christians welcomed him for revoking a list of bone splitting penalties introduced against them by his father, emperor Valerian. One christian did get into trouble though. St. Zeno cured Gallienus's daughter from demonic ceiling crawling. Gallienus thought his girl was just being a typical teenager and resented Zeno sticking his bishop's crock in. The emperor had Zeno colourfully crucified.

Helps to be connected[edit] 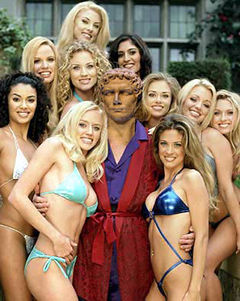 Gallienus's career before his family got their purple meal ticket is obscure. Allegations that he was a dabbler in the Imperial stockmarket or had 'positions on the slave trading industry' are mixed with other stories that he was essentially a loafer (natch, not loofah!). No great scandals were associated with Gallienus. He mixed with the right people but only to ensure life was less complicated. His only known hobby besides the usual vices (sex and flower arranging) were military tactics. This didn't mean Gallienus actually wanted to go out and look for war but he had some ideas about improving Rome's military machine.

In 253 his father Valerian became Roman Emperor by killing the previous occupant (the usual way for promotion). Valerian made Gallienus co-emperor, with the brief to look after 'the Western bit' of the empire which included Britain, France, Germany, Spain. Valerian kept the rest and moved off East to sort out the Goths and Persians. Gallienus was probably now in his early 40's and unenthused to patrol the imperial borders looking for Germanic tribes to chase around in forests. He wanted to go back to Rome.

Gallienus's campaign along the Rhine frontier was a disappointment. The Germanic tribes ran away so the emperor was soon back in Rome. He did have a new idea - that was to send two of his own sons Valerian the Younger and Saloninus out in his place. They became imperial interns, one in the Balkans and the other in Gaul. Gallienus meanwhile had set up his own military academy in the Praetorian Guard barracks where over the next few years future emperors Claudius II, Aurelian and Diocletian learned how to salute and ride a horse backwards.

For the next few years Gallienus chose to enjoy his position by building a large palace on the Saturnine Hill, a man-made mound constructed of old discarded, 'beyond their shelf life' slaves. There Gallienus liked to spend all day in his dressing gown with his nymphs dressed like white rabbits. Selected friends were invited to bathe in Gallienus's hypocaustic pool. People in Rome were not shocked, by the standards of a Caligula, this was tame stuff.

Gallienus's lifestyle didn't change a lot when in the space of two years he lost both sons and his father. Valerian the Younger died on a bloody military camping holiday and his brother Saloninus was stabbed by his boss Postumus in Gaul for making fun of his boss's scratchy Gallic Latin accent. Then Gallienus received news that his father Valerian had been defeated and was now a dishonoured guest at the court of King Shapor of Persia. Gallienus said he would act immediately. Now where was his pipe and dressing gown?

With Any Luck I Will Outlive Everyone[edit]

Gallienus was now was now on his own but it didn't take long for others to emerge and apply for his job. Postumus in Gaul had already killed Gallienus's son Saloninius so he set up his imperial shop in Trier and was acknowledged as emperor in most of the Roman Empire north of the Alps. However, instead of marching on Rome and permanently retiring Gallienus, Postumus said he didn't like Italian food and was staying put. Gallienus bribed some of Postumus's friends to kill him at a dinner party but their throats were cut before dessert was served.

In the East the Persians will still celebrating their capture of Emperor Valerian. Shah Shapur sent mocking letters to Rome describing what humiliations he was inflicting on Gallienus's dad. He hoped Gallienus would rush east to avenge his father but nothing happened. The cynical Gallienus replied simply that his father could take care of himself and Rome was very nice this time of year to go out dad searching in the Middle East.

In amongst these ephemeral glory seekers, King Odaenathus of Palmyra offered an alliance with Gallienus and won a contract to re-conquer the Eastern Roman Empire for him. He also promised to take on the Persians too and in this, Odaenathus successful. Shapor lost his army and the contents of his personal trailer where what was left of Valerian was now being used as a couch covering. Odaenathus diplomatically had this buried but sent a sketch to Gallienus to show how it looked. 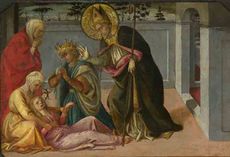 By 268 Gallienus was now feeling confident he could deal with Postumus. His eastern deputy Odanathus had died suddenly which removed the threat from that quarter and the spate rebellions had abated. So Gallienus sent general Aurelos, a protege of his new military academy, to take on the 'slow thinking Northerners'. However Aurelos was defeated and retreated to Italy to feel sorry for himself. Gallienus relieved his favourite of his office but Aurelos occupied Milan and threatened to burn the city down unless he was forgiven for failure. Gallienus declined and put Milan under siege. Gallienus was poor when it came to understanding the trajectory of his own inglorious career.

The siege was going badly. Milan showed no desire to surrender and Gallienus's army didn't seem to keen to die for their emperor. One morning whilst taking a leak outside his tent, Gallienus was set upon by his own generals and cut down. They then apologised and said 'it was business' and asked the dying emperor who he think would be a better emperor. Gallienus is said to have pointed a bloody finger at one his assassins and said: 'Claudius is the man with the sharpest knife. Make him your next emperor.' And they did.

In Rome, the Senate celebrated the death of Gallienus. Forgetting their own lack of criticism of Gallienus when he was alive, the Senate ordered the destruction of the late emperor's statues, memorials, his Saturnine Palace and all surviving members of the imperial family. This looks cruel but it was typical Roman justice then, Mafia style.