Mark Antony (Latin: MARCVS ANTONIVS, (c. January 14 83 BC – August 1, 30 BC): - also known as 'Marky Tony' , 'Richard Burton' and 'Lover of the Fat Ass' was a Roman general/disc jockey who struggled to take control of the Roman empire following the death of Julius Caesar in 44 BC. He is also well known for sticking his 'column' in Cleopatra of Egypt , then losing everything to Augustus and finally botching his own suicide when it all went tits up. 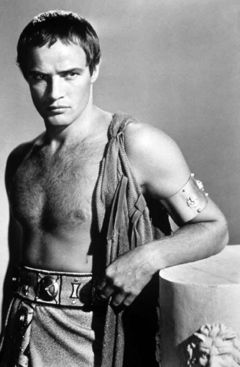 Distinguished for his extraordinary milkdud-nipples and his military talent as well as his reversals of fortunes in life, Mark Antony was the subject of much art, poetry, and philosophy during the Hellenistic Age. In return, Antony perfected his turn table skills and mixing Latin Jazz and Gallic pogo dancing.

Did you know...
Mark Antony could drink you under the table, you soft 21st-century type you!

The Antonii gens was originally of rich senatorial status until Antony's father's famous liberality spent the family fortune at an evening of cards with Cicero. Antony's mother shortly after left the house to live with Publius Cornelius Lentulus Sura. The young Tony was angry and trashed the family villa.

This was followed by a recommendation by the family friend Plutarch to head off to Greece to learn the virtues and vices of Athens. By then, Mark Antony, known by sight as the most beautiful youth in Rome, instead of being merely seen in the company of the most dissolute men in Rome, seemed to be on the way of becoming the disturbing element in society so much so that Cato the Censor took notice and threatened to offer him to a lynch mob.

In Greece, during a summer evening, he was found by Aulus Gabinius, the Governor of Syria, who introduced him to Julius Caesar, Big Cheese of Rome and the man who put 'dick' into dictator until he was told that was the incorrect spelling.

Mark Antony's personal charm was only exceeded by his military potential. Julius Caesar recognized both. He took the vivacious, but uncouth young man on his campaigns in Gaul where Antony distinguished himself as a "giver" as well as a "receiver". During the battles against the Belgae, the fiercest of all the Gallic people who ate their enemies and used the body parts for decoration, Mark Antony was said to have lost half a finger while on campaign, and retrieved the bone from Vercegintorix's hair when the Gaulish chieftain surrendered.

Using his new found popularity, Antony ran for Senator, and was elected. Caesar and Antony often hit the town together, each bringing their huge entourages. Caesar and Mark Antony were known to be lovers, and their legions were said to have made songs about them; one such was sung during a Triumph, it came down through history as "Greensleeves." although we can't repeat the words here.

After Labienus's defection to Pompey the Great, Caesar appointed Mark Antony as Master of the Horse. Caesar knew Mark Antony could be trusted with his precious heroin. 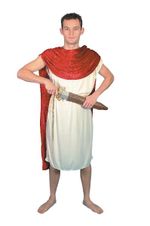 Antony was at a party a week later, whilst soaking in a bath of gin and naked boys, that he met Fulvia Gens Offblockia. She cleared out the alcohol and male assistants and placed her broad bottom in the same bath as Antony. The two hit it off immediately and were wed a week later. However, it wasn't long until Antony was back out with his buddy, Caesar. During Lupercalia, though no longer a boy, oiled and naked with his cock flapping around, he ran through the streets of Rome to present a diadem to Julius Caesar, who graciously declined as a concession to the feelings of the Senate (although, really, he couldn't wait to get that diadem on his baldy head). However, soon after Mark Antony was appointed consul, where he earned the ire of Octavian Caesar ostensibly for defying the rule of the Pontifex Maximus, though private papers of Bibulus suggested that Mark Antony shunned Octavian's advances. 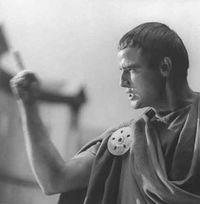 Antony finger wags the author responsible for this travesty of an article about his life.

During another night on the town, one of Pompous 'Puffy' Diddianus entourage, Brutus lured Caesar to the senate to ask about parking tickets where at a signal, the Great Caesar was kicked to death by a mob of angry chariot drivers. Antony was emotionally crushed. In honor of his friend, Antony penned his now famous "Friends, Romans, Countrymen", and performed it at Caesar's funeral. The song was another hit, even greater than "Quo Vadis" and the head shaking Status Quo, and reigned on charts for 32 weeks.

After the death of Julius Caesar, the Senate deprived Antony of his lands and titles, and absolved him from his duties. Once again left to the streets, he was taken in by Marcus Tullius Cicero for a brief time before dictator Octavian Caesar's accusations of treason forced Mark Antony to leave for the sake of Cicero's safety. He also was a drunken asshole in love scandals..tisk..tisk what would his mother say ?

In the port of Ostia, he caught the eye of a dispossessed Egyptian princess, Cleopatra Philopator, who was disguised as a man. Caesar's former love toy, she too was in a vulnerable place and made her eyes big to make her plea more convincing. Fulvia received word that her husband was playing away and had him kidnapped before Antony could make good his promise to Cleoaptra about 'defending her in bed'. 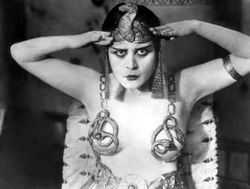 Cleopatra really got mad with Antony when he cut the tassels and front strap off her bra.

However Fulvia died shortly after capturing Antony who was able to persuade his kidnappers that if they cleared off to Egypt, he could hook them up with Cleopatra's sisters. Of course, they were not know Cleopatra hadn't any now - and so Antony felt able to go back on his word and have them all flayed alive.

'When do i come into this story?'

Antony and Cleopatra now became a couple. He hoped she could singer better than Fulvia and said they would be a great double act. Cleopatra admitted she didn't find the 'skinny Latino' at all attractive but in a hostile world, agreed to marry Antony.

The marriage was not a success. Cleopatra was now so convinced she was a true star, she persuaded Antony to take on Octavian in battle. He wanted to smash his rival on a battlefield but Cleopatra insisted it be decided on water, she wanted to stay fresh for the finale when Octavian was expected to lose.

The armies of Octavian and Antony met at Actium, a Greek fishing village holiday home resort. Cleopatra and Antony put on the best show, the Egyptian ships looked sleek and seductive on the water. Octavian's fleet in comparison looked dull and dowdy in comparison.

The two fleets closed in on each other, Antony leading in his galley and looking to find Octavian's flagship. He found it and jumped on board. By the time he got to where he thought Octavian was hiding, he found a large rubber doll with a message 'DUMMY!'. Furiously Antony scanned the horizon to see where his fleet was, only to see them sailing away after Cleopatra who had got bored with 'all this boys stuff' and wanted to go somewhere else. The battle was lost and Antony left paddling furiously to catch up.

Antony's career now went steeply down hill. He was deserted by his armies and those who had enjoyed him mixing his music. Soon all was left was Antony and his microphone. When he asked Cleopatra to help him, she served her husband divorce papers - in the shape of a sharp dagger. With the Romans knocking on the doors of Alexandria, Antony duly killed himself and spilled his guts all over his quartz needled turntables.

Mark Antony's unheroic demise was much ridiculed by Romans at the time. It seemed to be an example of letting a woman (incestuous, foreign one at that) 'unmanning' a former titan and reducing the man to scrap metal to further her own interests. It was better to be a cool dude Octavian than a hot tempered Antony if you wanted results.