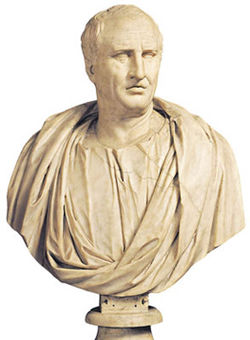 Cicero keeps the bedsheets on for his bust sitting.

Marcus Tullius "Tully" Cicero (106 B.C. - 43 B.C.) was a Roman politician, orator, and lawyer. He is also credited for popularizing the Orange Julius, which he originally concocted as a celebratory beverage after the assassination of Gaius Julius Caesar in 44 B.C. (At first he called it the "freshly-spilt Crimson lifeblood of Julius," but changed the name for marketing and flavor purposes). It was NOT, as many claim, invented by Caesar himself to combat scurvy at the Coliseum... but of course that prick would try to take the credit posthumously.

Cicero was born into a moderately wealthy Equestrian family in Arpinum, a suburb of Rome. As a boy, he was educated in the style of the times (philosophy, arithmetic, literature, Greek, etc.) and proved to be an intellectual prodigy. However, he was not soldierly material (as evidenced by his exemption from serving under Pompey's father, Pompey Strabo). Plutarch relates:

Cicero made his name in a famous court case Pro Rustico Amoricum (In defense of the yokel lover) pitted the young Cicero against Sulla's favorite Chrysogonos (Golden Gonads), who had been up to all sorts of nasty tricks whenever Sulla was asleep post-coito - which was pretty much all the time. Cicero won the case - or as the joke went - "The golden tongue licked the golden gonads". 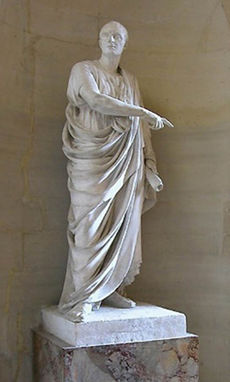 One of Cicero's earliest jobs was pointing out the location of the toilets in the Roman Senate.

Finally, he was admitted into Roman politics after he convinced a cool friend of his (Titus Pomponius, known to posterity as "Atticus") to steal thousands of dinarii out of his mother's purse; he augmented these funds with his family's considerable income from farming and prostitution.

Cicero used the money in order to finance a successful campaign for the post of curator junior calceorum patriciorum (Junior Boot-Licker). He ascended the cursus honorum until becoming Consul in 63 B.C., when he uncovered Catilina's conspiracy against the Roman state and swiftly got an intern to deal with it, because he had a "thing" downtown. He, like his fellow Arpinate Gaius Marius, was a novus homo, the Latin term for the first man in his family to achieve a Consulship or be convicted of pederasty.

Cicero was exiled in 58 B.C. by the actions of a rival politician, Clodius, who cultivated popularity with the plebeians by performing unnatural acts with his sister in public in order to oppose Cicero's manifestly-conservative stances.

Catullus, the Oscar Wilde of his day, immortalized these two enemies of Cicero as follows: 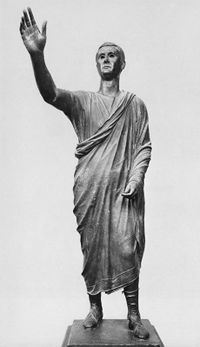 Cicero's right hand grew to an abnormal size. He said it was all because of his constant writing but there were cruder suggestions for Cicero's deformity.

Cicero was recalled from exile in the subsequent year, most probably because Rome missed the way he used to yell "Let's get ready to rumble!" before each meeting of the Senate. He supported the Pompeian faction in the period of Civil War that followed Caesar's Gallic conquests, and traveled with such notable Romans as Cato the Younger, Brutus, Pompey himself, and a guy that once shared a public latrine with Sulla - and lived.

After Pompey's ultimate defeat in Greece, Cato and Metellus Scipio entered into a vaguely-homoerotic murder/suicide pact and killed themselves in Utica. Pompey fled to Egypt to raise more forces, but was betrayed by King Ptolemy's eunuch ministers, who exhibited a surprising display of testicular fortitude in executing the famous Roman general. Cicero and Brutus returned to Rome and were pardoned by Caesar for fighting against him... a move which would soon come back to bite him in the ass. 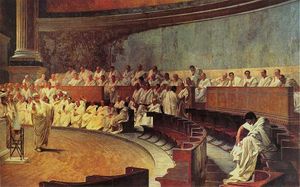 Cicero takes the piss in his inimitable way

Cicero supported Caesar's assassination in 44 B.C., but was far too scared to actually take part in the deed. Advanced bladder disease may also have been a cause for his "sitting this one out," as he wrote to Atticus; his frequent need to urinate is well-documented by the poet Catullus:

After Caesar's death, Cicero openly opposed the triumvir Mark Antony in a series of speeches known as the "Philippics." Antony, though, made sure to list Cicero among the proscribed citizens who were cited as threats to the new regime. He was murdered in 43 B.C., on the orders of the triumvirate, and his hands and head were displayed in the Roman forum. It is unknown where his genitals were displayed but they may have been sent further east where the locals would have erected a temple in memory.

Everyone knows that Cicero wrote many legal and philosophical texts. However, he also penned a few sexual how-to manuals for the deviants of his day.