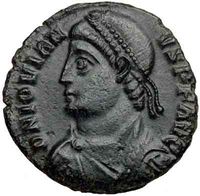 Jovian: 'Well at least I got the Romans laughing again !'

For those without comedic tastes, the so-called experts at Wikipedia have an article very remotely related to Jovian (Emperor).

“Have you heard the one about the Vandal, Goth and Persian?”

Jovian (Latin: Gigglus Joviaus Clownicas; 331 – 17 February 364), was Roman Emperor from 363 to 364. He became the Emperor following the death of his predecessor Julian the Apostate on a military campaign in Persia. The Romans needed cheering up and Jovian was a jolly fat centurion who told jolly fat jokes.

Jovian was only on the Persian expedition trip because Julian needed to talk to someone when he was alone in his tent. Jovian had previously appeared on the sunday afternoon billing at the Circus Maximus in Rome telling jokes in the refreshment break between the lurid 'Maenads River Trance' performance and the main Formula Uno Chariot Race. Emperor Julian liked Jovian's jokes - especially the one about the vestal virgin and the bishop which the Emperor never got bored hearing again..and again...and again.

When the news that Julian had died, the Roman soldiers voted for Jovian to be the next emperor after he promised everyone could go on a big long holiday once they left Persia. This pleased his army and off they headed to the sunny beaches of Syria to go surfing. This left Jovian with just his bodyguard and a huge box of chocolates which he proceeded to stuff when he got a note from the Persians. 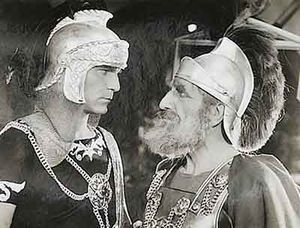 Jovian's jokes got so bad that Roman soldiers preferred to stare at each other all day instead of listening to any more of them.

The Persians wanted to meet the 'funniest Roman Emperor since Nero and asked him over to their army encampment pitched up nearby. They promised a 'great audience' and that Jovian's jokes would live 'to the end of time. Like all comics - even Emperors - Jovian thought that he should visit them.

But Jovian was short of comic material so he asked two of his servants - the brothers Valentinian I and Valens from Rome - to give him their best one liners. They objected but with Jovian's guards pointing swords into their backs, the brothers were soon scribbling away like mad to please their emperor

Before Jovian went off for his gig with the Persians he took the precaution to get the Christians say nice things about him and gave them all their top positions again in the Roman Empire. The Pagans were told to clean up their heathen ways and that they - the Christians - were the masters now. THey also decided to honour Jovian and renamed him 'St.Father Christmas'. 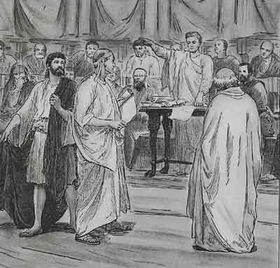 Jovian about to tell the Persians his deadly joke.

History relates that Jovian indeed performed in front of the Persians. Apparently the gig went so well that Jovian was hailed as the 'Emperor of Mirth' and that the centuries long war between the Romans and Persians was at an end. But then Jovian made the fatal error to tell his audience a joke about what Persian women really thought about their husbands...and died on stage. This wasn't one of those old comedian jokes about not getting a single laugh - Jovian did actually die on stage when 10,000 outraged Persians fired their arrows at him. It was a shame since the joke was apparently one of Valentinian's .

St. Father Christmas and the advisability about telling certain jokes in front of hostile audiences are permanent memorials to Jovian.