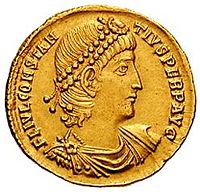 Constantius II was camera-shy and thus notoriously hard to capture in coins or portraits, resulting in high unemployment amongst sculptors of the 4th century.

Constantius II (Flavius Iulius Constantius) known as "a big prick" - and even more of a male reproductive organ than his father Emperor Constantine the Great . Constantius was Roman Emperor from 337-361 (sole Emperor from 353, Soul Emperor from 359). Despite ruling the Empire for a number of years and maintaining peace, even amongst the Scots, Constantius II would be best remembered for two unfortunate incidents in his life, one involving his mother, and the second the deaths of several tens of thousands at his own hands.

Constantius II was one of four sons of Roman emperor Constantine. He was made Caesar at the age of 7, along with his elder doughnut-scoffing half brother Ricus Crispus Cremus, elder brother Constantine II, and diaper wearing sibling Constans I. From an early age, Constantius II had suffered from a bout of "middle child syndrome" and was sent to a special school run by Arian[1] Christians, a sect who believed Jesus was just one of the boys and an aspect of God, hidden by trees to fool the feeble minded. Contantius seems to have absorbed some of this teaching but was taken out of his classes when his father had his elder brother Ricus Crispus Cremus murdered[2] ,allegedly in an attempt to cover Constantine's unimaginative taste in names and something about accusations of incest with his missus Fulvia. Constantius decided blending in would not be such a bad idea after all.

After Constantine died, Constantius II organised a lovely funeral, after which the "promiscuous massacre" of annoying family relatives took place, a murder spree that was combined with an enormous amount of post-gory sex in the traditional Roman manner. When the dying had stopped, only Constantius and his brothers were left and a few snotty cousins (including the future emperor Julian) who had been out when the government assassins called. However even that vigorous family weeding wasn't enough for these particular Blood Brothers. Constantine II decided he had been diddled in the carve up and tried to take it out on Constans I by invading Italy but ended up dead in the bottom of a pointy stake trap set by his little brother. Constans I hung around a little bit longer but was then hacked down at a ski resort in the Pyrenees when he got into an argument about queue jumping. Constantius sent flowers and a card but waited to move west once he disposed of the usurper Magnentius. The Roman Empire had been reunited. 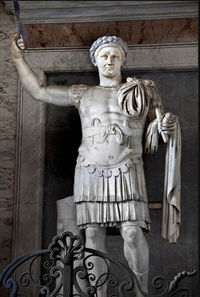 As sole emperor of the east and west, Constantius II reaffirmed his support of Christianity like his father. He was best friends with St. Athanasius, until Constantius came out of the Arian-closet. The emperor tried to patch things up with Athanasius, and even bought him a puppy[3], but to no avail. In 357 Constantius had the Altar of Victory removed from the Senate House and beat people with it[4]. During his visit to Rome during the same year, the Roman historian Ammianus notes importantly that Constantius needed to "say it, not spray it".

Constantius was great pals with Themistius, a pagan orator[5], and roped him into a senatorial recruiting campaign for Constantinople, prior to which Themistius told the Roman senators that Rome had a great deal to fear from the Fair City. He also slipped in some gold 'sweeteners' and soon a long convoy of politicians were heading to the East to administer the empire's wealth to themselves and a few friends in the right places.

Though Constantius had never liked any of his family, he had reluctantly agreed to let his cousin Gallus run part of the Roman Empire in Antioch. He also happened to be his brother-in-law too, marrying Constantius's sister Concertina[6] before taking up the job. However when Constantius got reports that Gallus was far better looking than him and was showing signs of threatening his authority by licensing anti-Arian comedy clubs, the emperor recalled his colleague. On the way Gallus fatally tripped over a chopping block whilst Concertina was walled up in a cave with some light reading matter (now known as the Dead Sea Rock and Scrolls).

For the religious among us who choose to believe lies, the so-called experts at Wikipedia have an article about Constantius II.

Constantius's most important policy involved Persia under Shapur II. He decided the best way to get people to really love him was not to go on a major Persian invasion, but to employ a defensive strategy and wait for the Persians to tire themselves in attempts to besiege forts and steal all the ice-cream. When later challenged by historians asking whether this approach may also have had an offensive element, Constantius refused to comment and proceeded to beat said historians with the Altar of Victory.

He received this same treatment himself, in literary form, by contemporary Roman writer Ammianus Marcellinus who said, "Constantius [II] cried like a girl outside Amida when Shapur [II] stole all the ice-cream." Libanius, when contrasting the different military approaches between Julian the Apostate and Constantius, said, "Julian had his own way of going about things, and his 'dad', another. Both were important, but in another way, they were importantly different... don’t quote me on that."[7] 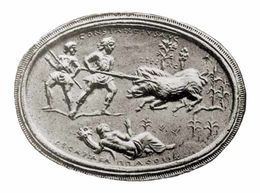 Once again Constantius had his toga tugged to let another of his relatives loose on the Roman Empire. His wife Eusabia suggested he promote Gallus's younger brother Julian as Caesar. He was skinny, angsty youth who had read too much Plato and had ambitions to be a published writer. Constantius was still inclined to find or manufacture an excuse to kill his cousin but his sister Helena said Julian was a cute and wanted to marry him. In the end Constantius considered Julian less of a threat with his very gay sounding name and egg head reputation. However, to make sure, Constantius paid a fortune in bribes to hairdressers and body masseurs to get the 'in' on what Julian was really up to.

Matters all came to ahead in 361 when Constantius got the news that Julian was now developing a lot of body hair and had taken up kick boxing. Empress Eusabia had died and Constantius's new wife Faustina was pregnant ('definitely a boy' believed the emperor). This made Julian eminently disposable in Constantius's fevered mind so he requested Julian to meet him in Constantinople to reapply for his job as Caesar. Suspecting the true nature of the interview and mindful of Gallus's fate, Julian proclaimed himself emperor and marched to take over the empire. Constantius II started rallying his troops in order to combat this cheek but decided he simply couldn’t be bothered any more, so said "screw it, I've done enough to earn myself a wikipedia entry" and died. A few months later Faustina gave birth to Constantius's daughter Flavia Maxima Constantia, though later in life she went by the name of Nancy and married emperor Gratian.