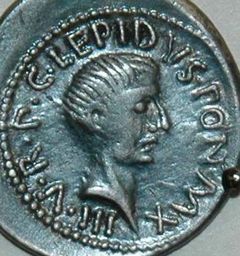 Lepidus's comb over didn't make him any younger or attractive.

“I am feeling a bit ginger beer Octavian. ”~ Lepidus

Marcus Aemilius Lepidus (89 B.C - 14 B.C), a Roman politician, senator, triumvir, networker, sniveler, lickspittle, toady, toerag, etc, slimed his way across the Ancient World until he was brushed out of the way in the struggle between Mark Antony and Octavian Caesar. Even in life he was mocked and his name synonymous with uselessness ("oh...don't be a total Lepidus Tony and make a queen smile tonight" was Cleopatra's reported put-down of the time[1]).

Lepidus was a born mediocrity. In a world of imperial-sized egos, he bumbled his way around and if Lepidus avoided the slings, arrows (and daggers) of Roman politics, then at least this showed he had low cunning. Only Octavian (or Augustus as he became) outlived Lepidus and that was because the emperor had long before concluded that murdering or executing Lepidus would be seen as an act of cruelty rather than bold politics. So instead Lepidus was locked up into his own villa and contrived to merrily live like that for next 23 years, performing his only remaining official duty as Pontifex Maximus[2], Chief Holy Wailer of Rome, in charge of reading animal entrails[3] and predicting the weather.

For those without comedic tastes, the so-called experts at Wikipedia have an article about Lepidus.

Despite his reputation of worthlessness, Lepidus was a well connected Roman aristocrat. His father Lepidus the elder was an equally shifty individual, posing as a friend of Republicans and their leader Sulla but then wheedling his way into the confidence of Pompey. Lepidus Senior eventually sneaked on his 'friends' once too often and got sent to Sardinia, the Roman world's equivalent of Siberia. Lepidus Junior made a note to be more 'nimble in his sandals' and cast around to make himself useful to a coming man. That was Julius Caesar.

Unlike the Republicans, Lepidus held no great shakes with the Roman Constitution and happily trailed with Populist-Democrats if that involved, bread, circuses, defence contracts and dancing girls. It lead to Caesar to appointing Lepidus 'Master of the Horse', an important job that gave Lepidus access and distribution rights to the flourishing (and legal) drug trade [4] He never seemed to have become an addict but contemporaries relate Lepidus did have strange eyes and that he spent an inordinate amount of time in the stables.

Death of Caesar and the Second Triumvirate[edit]

Lepidus's reputation as a 'horse botherer' (Equitum Molestus) was considered unfounded until this statue was discovered in a restaurant.

When Caesar was assassinated in the senate, Lepidus chose to go with Mark Antony. It was an easy decision to make as Lepidus discovered that Brutus who was also his brother-in-law had considered knocking him off too but had changed his mind not wanting to make his sister Junia a widow just yet. So Lepidus joined Mark Antony, his drug connections intact and proposed an alliance against the Republican killers.

However, this cosy duopoly was broken when Caesar's great nephew Octavian claimed he had equal rights with Lepidus and Antony to run the Roman republic. There was only one solution, there would have to be a new regime and a sharing out of the spoils once Julius Caesar had been revenged.

Echoing an earlier constitutional arrangement, supreme power was invested in a 'Triumvirate'. Yet when Romans saw the three generals marching into Rome and dictating these new arrangements to the senate, no one had a problem identifying which one was Lepidus. If Antony had the glow of experience and Octavian the light of youth, Lepidus could only offer a middle aged spread and a bad haircut.

The war against the 'Brutal' Republicans was eventually won. Their political platform of assassination, financial retrenchment and no gays in the Roman army had little appeal. However there were other Republicans still lurking around under under the leadership of Sextus Pervertus Pompey, son of the old lard arse Roman leader. Using a fleet and intercepting food supplies to Rome, Pompey's activities stirred up political danger for the Triumvirate. They would have to make a deal. Three would now have to become four, a quadraphonic.

The war was declared a draw so all the former combatants met on a galley to celebrate. Sextus Pompey mocked Lepidus for his inability to hold his drink and became the main source of all future jokes disparaging the triumvir. Lepidus had to take it, smiling and wiggling his ears as Mark Antony and Octavian joined in the cruel mockery. Lepidus as a flatterer himself knew these words were cheap and that Sextus Pompey was a pumped up balloon. Perhaps he also hoped that in a three way struggle, the others would contrive to kill each other off. May be Lepidus would become the new overall ruler by default?

A Roman priest who appears to be stunned that one of his predictions have come true. Now identified as Lepidus because of the facial expression.

Yet for even Lepidus, there was a limit. When Sextus Pompey (still nursing a hangover from his galley party) sent a secret message from Sicily suggesting perhaps he was a 'little harsh' with the jokes and that may be the two men could counter Antony and Octavian, Lepidus chose to leak the information to Octavian. It seems Lepidus was banking on Sextus getting the better of Octavian but if so, he was disappointed. Sextus lost the war and then his life. As for Lepidus, he turned up with his army to take part in the victory only to be confronted by Octavian. Lepidus's legions refused to fight for a 'loser' and a 'joke' and joined Octavian's army wholesale. For Lepidus now the choices were simple:Death or Degradation.

Lepidus chose the latter, it wasn't much of a choice though he went through the full process of calculated humiliation with a surprising cheery outlook.Octavian's friend and colleague General Agrippa ripped off Lepidus's triumvirate monogrammed cloak and tunic, stamped on the laurel leaves and insignia and then spat in his face. Lepidus took it all. Octavian expressed surprise that Lepidus hadn't chosen the 'Roman Way' and retreated to a hot bath to open his veins but the chipper Lepidus said ..I only take showers... This reply so tickled the notoriously cold fish Octavian that he spared his former colleague's life. 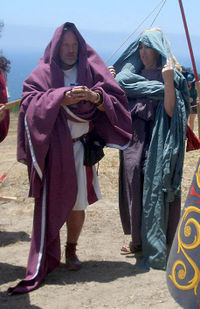 Lepidus and wife as Mr and Mrs Pontiff.

Lepidus was sent to a villa near Rome and told that if he so much stuck a little toe in Roman politics again, then Octavian would re-consider ex-triumvir's retirement plans. However this ban didn't extend to Lepidus's son Lepidus the Younger who unwisely got involved in a plan to kill Octavian. When that plot failed, Lepidus made no intervention to save his son's life This inaction garnered him more abuse and smelly packages thrown over the garden wall by angry Romans. If ever Lepidus considered sneaking back into contention for the top job, the fate of Mark Antony persuaded him that Octavian - soon to be Augustus - would be impossible to dislodge.

Still, Lepidus did retain at least one public office. He was Pontifex Maximus which then meant he was the most senior priest of the Roman religion. It had been one of Julius Caesar's jobs and in the confusion that followed his death, Lepidus jumped on the vacant chair and refused to move until he got it. Perhaps Lepidus hoped it would give him some leverage in the future wars but when everything was lost, Octavian allowed him to keep his job. It was a post that came with a uniform (a toga with a hood no less) and a knife to be used for cutting up animals made available for sacrifice. Lepidus quite liked this bit and could be overheard calling his unfortunate victims 'Brutus, Cassius, Sextus..' but wisely made no sly mentions of anyone in imperial favour.

Curious to relate, Lepidus's post as 'P.M.' grew into importance over the years. Augustus wanted to make his rise to the top 'divinely backed' and gave Lepidus the job of running the Imperial Cult. It involved commissioning innumerable statues of Augustus looking wise and insightful, stone inscriptions praising the emperor with sandal curling flattery and that apparently the Gods were all on board with the 'restored republic'. Lepidus remained the chief cheerleader but was still obliged to report his daily bowel movements to the Rome police.

Eventually old age got Lepidus in the end and the biggest political failure in Roman history died of natural causes. No Roman writer mentioned the former triumvir's passing in any detail except to say that Augustus decided to merge Lepidus's job into his own. It was a sign that this 'Pontifex Maximus' title was now too important to be given to anyone else except the emperor.

So Lepidus could lay claim to be the first 'Pope', a strange notion for Catholics used to seeing St.Peter receiving his divine commission from Jesus. Centuries later the successors of St.Peter eventually got hold of this post when the last Roman emperor (in the West at least) to hold this post, Gratian, gave it to Pope Damasus in 380 AD as a birthday present. Over time, the office of Pontifex Maximus became better known as 'Supreme Pontiff'[5] and from this position later popes could 'pontificate' from a position of arrogant self assurance[6] about anything including the seating arrangements in Heaven or whether Galileo needed new glasses for suggesting the Earth moved. Perhaps not such a long way from reading intestines in Lepidus's day.