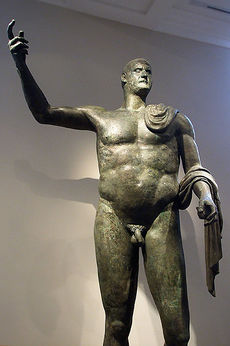 For those without comedic tastes, the "questionable parody" of this website called Wikipedia have an article about Trebonianus Gallus.

“Any relation to William Gallas?”

It does make you wonder why anyone wanted to become Roman Emperor when you examine the brief career of Trebonianus Gallus. Seriously, did he get any Caligula sized fun and madness in his two years as a the Living God, a divine like powers that always deserted you the moment someone came at you with a sword?? Whether Trebonianus Gallus was particulary bad or not seems immaterial, he died and so did all his sons and friends when Lady Fortuna left his side.

What is known is that Gallus was blamed for the death of his predecessor Decius by arranging an 'against the odds' battle with a horde of bad Goths. He also didn't stick around after the defeat in the Balkans but was back in Rome to give the bad news personally to the Caesar Hostillian. On the lines 'your dad and brother are dead. You are the emperor but I am willing to be your deputy/colleague'. Once Hostillian agreed, he was mysteriously dead a few days later.

Trebonianus Gallus was a rarity during this time period, a Roman emperor born in Italy. His skills appeared to be more political rather than military. If it was him that betrayed Decius, then those silky skills as a smarmy smooth talker would explain how he climbed to the top. Gallus also appears to have been vain, though oddly lacking self awareness. He posed for a bronze statue in the posture of a naked man trying to gain attention from the bar staff. The size of that metal belly at least shows Gallus wasn't bothered about exposing copious amounts of his flabby body.

His first task as emperor was to dispose of Hostilian who just disappears off the historical record. No one seemed to be too bothered to see him go or ask any questions. Gallus therefore promoted his own son Volusian as Deputy Emperor and now tried to make sense of what he was in control of.

The main problem was what to do with the Goths. They were still happy about their reputation as 'purple killers' (the Colour Purple referring to clothing wore by all emperors) and were still hanging around inside the empire. In an attempt to civilise the invaders, Gallus gave them free soap and an all day pass to the nearest bathing complex. The Goths were disinclined to move until news was received that their own mud huts on the other side of the River Danube were under attack from Scythians.

The Persian 'King of Kings' Shapur still expressed 'unhappiness' that his old friend emperor Philip the Arab had been done to death. He also came up with an excuse that Philip had promised to hand over the eastern provinces in lieu of a gambling debt. Gallus said this was 'Persian baloney' but had sit by whilst Shapur sent an army into Syria. When the emperor finally got his fat body across the Mediterrenean, the Persians had gone and there was yet another rebellion along the Danube frontier.

Gallus sent letters to his legions to meet him. One of his generals Valerian set out to join up from Gaul but took the touring route to the rendevous point. By the time he arrived at the meeting place, Gallus and his son Volusian were dead and their army had disappeared to join a rebel called Aemilianus. It didn't need the services of an Ancient Roman Sherlock Holmes to figure out that both men had been murdered. Valerian had them buried and left the scene. He scented an opportunity!

Anything Else We Should Know About Trebonianus Gallus?[edit]