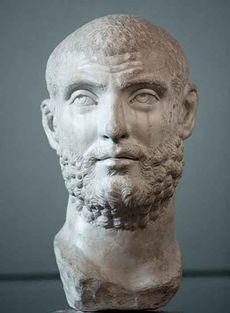 'Did you used to sit behind me at school. Is your name <insert name here>?'

There is a lesson in here somewhere. Don't mock that snotty boy in your class because one day he could become emperor and have you cut down for that. If historians are to be believed, Roman emperor Carinus (246-284) was such just a person to have done that. He was also alleged to have impregnated up to a dozen women, the wives no less of his generals and to have only finally stopped when he was defeated by rival imperialist supremacist Diocletian.

Carinus doesn't have any excuse of youthful high jins for his short lived career as the 'Killer in Purple'. He was nearly 40 when he was handed the levers of power by his father Emperor Carus and therefore doesn't have the excuse of a Caligula to have gone bonkers with supreme power, a real master of the Roman universe at more impressionable age. In other words Carinus is like a lot of people who perhaps secretly hateful ambitions but that a chance allowed him to act out these in a short lived career as emperor.

For those without comedic tastes, the so-called experts at Wikipedia think they have an article about Carinus.

Carinus was born in and around 246. He had a younger brother Numerian who would later share the Roman empire with him after the death of their father. Carinus lived and worked around Rome, his father's connections allowed him to go to the best orgies in town. However, Carinus's father had come from a peasant background and this was something his school contemporaries would love to remind him of daily. Carinus didn't seem very bright and it was expected he would end up as a dead end teacher of something or other. His brother Numerian was considered to be the more interesting one and it was hard Carinus not to think that he was also his father's favourite.

Opportunity knocked for Carinus when in 282 his father replaced Probus as emperor. Well if 'replaced' meant 'help to murder' then you get a better understanding how Roman politics worked. And you think the Mafia invented all of this? No sooner than his father's sandals were under the table to start running the Roman Empire than he made an offer to Carinus. Do you fancy sharing my responsibilities? Ever been to Gaul lately?

So with that instruction, Carinus went north out of Italy and began the important job of Roman emperor. The only guideline there was about ruling was 'don't get killed' and he would have needed no remiminder that the job of Roman emperor in the third century was as about as slow and steady as working in the arena with wild animals. There was no point putting money away for a pension or dreaming of owning a retirement villa, this job had a 99% guarantee of killing you with a couple of years. Perhaps Carinus thought these odds were worth taking because he wasn't slow to show a real mean streak in his reign.

Carinus had a mosaic made of his 9 conquests.

Whilst his father was still alive it seems Carinus at least kept some of his wilder fantasies under check. However in 283 Carus and Numerian left Rome to look for cheap Persian ass in the deserts out East. Their absence seems to have been the trigger for Carinus to move back to Rome and now, methodically to take revenge on anyone who had treated him 'badly'. It was a long list!

First to go under the knife were Carus's classmates. That all of them were now grown up and running respectable enterprises within the empire was no defence and under a flimsy pretext that they had been plotting against him since the age of 7, Carinus's made that one school re-union no one would care to remember. Next Carinus fixed his attention on his generals and other colleagues and seduced their wives. It's unlikely Carinus was much of a looker but he had life or death over them. When he received news that his father had been killed by a thunderbolt, what remaining inhibitions left to break were now thoroughly shattered by Carinus who appears to have had his libido on overdrive. 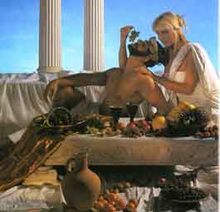 What was the point of becoming an emperor if you couldn't do this?

Carinus's attitude to his younger brother was probably hostile which may explain why Numerian was so slow to leave Persia and head back towards the centre of the Roman empire. The brothers were supposed to be colleagues but there seems to have been little communication. Still at least Carinus knew his brother but when he heard news of the strange death of Numerian, Carinus ordered widespread mourning in the empire. He also needed to seek out Numerian's successor, a soldier called Diocletian.

With the frontiers momentarily quiet, Carinus rushed East to locate Diocletian. Since he had a son Marcus Aurelius Nigrinianus who was presumably at least in his teens, it is odd Carinus didn't associate him with imperial rule. What ever the reason, Carinus and his legions came upon Diocletian somewhere in the Balkans. A clash was expected but now Carinus's reckless seduction of other men's wives got the better of him. One particular tribune came along on the march with his very attractive wife. Carinus turned away from the maps to defeat his rival and found an empty tent to seduce this new potential conquest. Instead it was Carinus who got the sharp end of this adultery, the tribune killed him and news was sent to Diocletian that his rival was dead, a fact probably emphasised by mailing Carinus's head in a box.

Carinus's death saw all memory of him 'damned' and that anything he had constructed renamed. Since all emperors were supposed to be Gods on their death, it in effect meant Carinus was the realm of Hades having his gonads roasted by a vengeful God. It also meant death for any members of his family and no doubt, all the children he was said to have sired whilst emperor. The Romans were nothing but thorough with their cruelty.