For those without comedic tastes, the so-called experts at Wikipedia have an article about Gaius Marius. 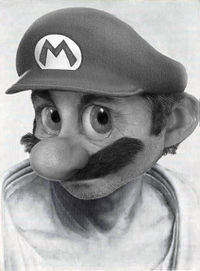 Marius:The Cute Tyrant.
“I am going to throw a spanner into Rome's Republican machinery..”

“Roll out the barrel! Gaius Marius and Ludivicus are in town”

Gaius Spurious Marius-Marius (157 BC – January 13, 86 BC), otherwise 'Superior Mario-Mario', Rome's George Washington, Consul, Senator and creator of the Democratic-Dictatorial Party, and a certified plumber is considered to be the founding daddy of modern politics. All the techniques that are accepted today - slandering your opponent, libelling your rival and running smear election campaigns - originated with Marius. He gave Julius Caesar the inspiration to found an imperial monarchy and put back the advancement of plumbing by two millennia or more.

His great political rival Sulla called him 'Rome's Rabble Rouser' and Marius deliberate appeal to the 'masses' (i.e. the Roman Mob) made him a feared political operator in a busy lifetime. He was despised by Rome's patrician class, the Ivy League, Skull and Crossbones fraternities but feared in equal measure. His turned the Roman armies into a full professional killing machine that would go onto to conquer most of Europe, North Africa and the Middle East. 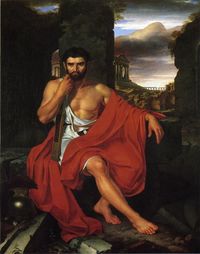 Marius ponders on a problem and exposes a tit to help him think.

Marius was born in dirt to a couple of illiterate Roman peasants. He had a younger brother called Ludivicus and experienced the very sharp end of poverty in a land of plenty. For this was an era when Rome was crushing enemy civilizations that were preventing its expansion. Marius would relate how Rome held a huge party when news that Carthage and Corinth, two great city rivals to Rome were destroyed in one year (146 BC) and how the two former Hellenistic superpowers of Ptolemaic Egypt and Seleucid Syria had sent ambassadors to perform a full grovel with a double flip handstand and triple twist. It was good to be a Roman, certainly one who was rich and involved with the slavery import-export industry.

As the rich Romans imported slaves to Italy to look after their lands and supply cheap entertainment, life for a Roman peasant was grim. Marius and his brother learnt a trade, they opened a Villa Fix-it service, repairing the homes of Romans in the growing capital city. Yet the returns were not good and how could you undercut a slave who would be willing to be flogged and scourged to get the same contract. The brothers opted for that other profession available - the Roman army.

Roman Times are A Changin'[edit] 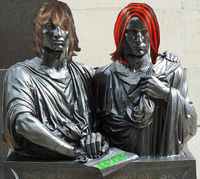 Marius and Ludivicus joined the legions of Scipio Africanus ('Afro') Minor, the man who had burnt Carthage to 'prevent anymore future Hannibals. The brothers learnt a lot from 'Afro' Scipio like 'if you are going to conduct a war, that the only rules that count are the ones you make up yourself'. Marius earnt his military medals in a series of campaigns around the Mediterrernean before returning to Rome. He wanted his soldiers to get their hands on all the spoils of war with shares all round. It was time to move into politics.

Centuries before Rome had been divided into the Patrician Party and the Plebian Party. These labels had lapsed turing the time of Hannibal as Romans and Carthaginians struggled for superiority in the Ancient World. Once that war had been concluded, the old rivalries returned but under different labels.

The 'Pats' became the Republicans whilst the 'Plebs' gravitated to a new Popular-Democrat alliance. Marius aligned himself with the Populists. To distinguish himself from other Roman politicians, Marius grew a moustache and liked to wear a cap with his initial on it. Cries of Marius..Marius...Marius could be heard in the main forum. For a man nutured in the shit, he had advanced his cause. Marius would now want to spread himself a little bit further. Brother Ludivicus acted as campaign manager.

However the brothers had other populist rivals - the Giant Gracchi Sisters. Tiberia Gracchus and Gaia Gracchus were unimpressed with Marius. They were products of a liberal Roman education, related to the Scipios but apparently self hating members of the 'Patricia Class'. Tiberiia and Gaia won the Populist primary and promised free mushrooms for the 'moblius vulgaris'. They won. Marius and Ludivicus felt slighted, checking the Roman rule book about woman running for Tribune. Moreover, Marius's old supporter Scipio Africanus had decided to retire from politics and devote his retirement on astrology. 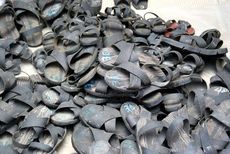 Metellus Romneus got through a lot of sandals.

Rome ran on patronage and the brothers Marius and Ludivicus needed a new sugar daddius. In came Metellus Romneus with his trade mark flip floppy sandals. Though a Republican, Metullus wanted to weaken the Populists. He was also an outsider, the worshipper of the cult of Plutus and a weekend devotee of Manna. Knowing the Marius brothers were enemies of the Gracchi, Metellus hinted he could do both sides a favour. A few days later strange graffiti appeared accusing the Gracchi of communism, gender impersonation and 'copyright infringers' (this last comment causing some bafflement amongst the Roman people). It worked and a patriotic mob grabbed the sisters and threw them off Rome's execution centre, the Tarpeian Rock. Romneus celebrated with a banquet and then sacked his staff and replaced them with slaves.

Romneus possibly underestimated Marius for with the Gracchi gone, Marius now put himself as the leader of Populists. The demands for reform had a new leader. Metullus had a suggestion. Rome needed a war to unite around. It wouldn't be against anyone big (thus ruling out Egypt and Syria) or barbarian bad hair practioners from over the Alps. Instead a war against King Jugurtha of Numudia, a kingdom in North Africa that had already been pencilled in as 'the New Carthage'.

The war went badly. The Numudians preferred to hide instead of standing up to a Roman army. More annoying for Marius was that Metullus had sent along one of his own men. Cornellius 'Ron' Sulla was like Marius, a Roman on the rougher end of the scale of civility. But Sulla wanted to be rich as Mett Romneus and sent back reports that the failure to win the war was down to Marius. Once the Roman senate had this news, Marius was called back to Rome. Metellus was now sent in Marius's stead. Marius's career appeared to be over. He went back to the Roman army, hanging up his toga and political career for good. Then the Germans invaded Italy.

The Roman senate panicked with the invasion news. Their best armies were chasing after gold and glory in Africa but it had meant Rome was defended by only glorified policemen and a few cohorts. Marius and Ludivicus (who had previously retired to run a funfair) were brought back to defend their home city from the Germanic horde.

There was only one slight problem, The Roman Senate said it had no money to pay for anymore troops and that it would be much better if they (the senators) got a tax cut and then the reduce of after combat health care for knackered old gladiators. Marius's response was to open up the Roman army for every male with the promise of government grants of picturesque cottages along the River Tiber. The campaign against the invaders was a success for the new look Roman army. Marius demanded a full-on, dancing girls victory parade. The senate sent him to North Africa (minus army).

The war in North Africa wasn't going so well. Mettulus Romneus came back to Rome and claimed his triumph anyway and left Sulla and Marius to sort it out. By luck, the rival generals got a result but Sulla got back to have his own triumph. Marius was left with nothing but the legions he had lead against the Germans were great fans of the 'bouncing man'.

Marriage and the Battle With Sulla[edit] 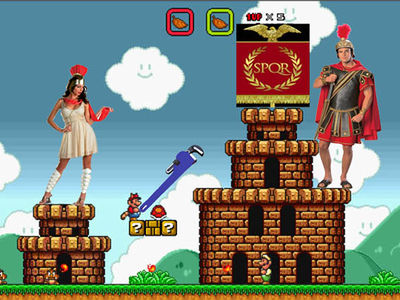 In amongst his travels and wars, Marius had acquired a wife. She was Julia Caesar, a large woman with a six pack stomach and extensive body foliage. She was a member of the Caesar family, a former Patrician dynasty who had lost all the money when they had bet against Rome winning the war in Carthage. Marius liked Julia's manly odours and the couple had one son Marius Ubendus. Julia's nephew Julius Caesar also received favours at this time which in Roman times meant physical as well as pecuniary.

Meantime the Republicans had got fed up with their flip-floppy Metellus and chose his colleague Sulla as their champion Since he and Marius were deadly rivals, Rome was expecting a punch up. Instead Sulla proposed a new war in Asia. The Senate voted in favour with Sulla promising them concessions, slaves and full use of his marble spa bath whilst away. The Roman assembly preferred Marius but agreed to let Sulla go east. Sulla then turned the army around and marched on Rome instead. This was the first time the mighty Roman Military had been used to attack other Romans in their own city. Marius and his son Marius junior got away but Ludivicus was too slow. He was made to run through a blizzard of rocks thrown by Sulla's soldiers and ended up with zero points.

Sulla and his Republican friends abolished many recent changes they didn't like and implemented tax cuts for the richest senators. But Sulla had a war to finish and so left Octavius Paulus Ryanius to complete the 'New Rome' political system. This proved unpopular with welfare addicted Romans and a message was sent to Marius and his son to return. They did and with the help of Marius's son-in-law Cinna the Sinner Senator ( a Popular-Democrat), re-entered the city with friends and killed Ryanius. Sulla's statues were broken and his mosaics defaced. Then other Romans who had supported Sulla got the same treatment too.

Marius secretly hoped Sulla would be either murdered or lose the war in the East. Neither happened and instead it was Marius who died first. His end was variously reported as getting crushed under gaily coloured bricks or falling into a vat of boiling liquid. With the old soldier dead, his son Marius junior and Cinna made a show of sending out suicide clowns and jugglers to take on Sulla but the city's gates were thrown open. The Romans were not going to back losers. Marius Junior and Cinna committed suicide, their followers (the unwise ones who sported a 'Marius tache') rounded up and used as target practise. Only Marius's nephew Julius Caesar escaped death and was instead sent as a 'free gift of Rome' to a Nicomedes, the notorious Greek King-Bisexual of Bicuriouser.

Marius and Ludivicus's life history was the inspiration for the Japanese game company Nintendo to create a game. Hoping to tap into the market of stereotypical Italians, the invented 'Super Mario Brothers' with Marius now 'Mario' and Ludivicus 'Luigi'. The Ancient Roman setting was eventually discarded as no one knew how to render togas correctly on a screen.