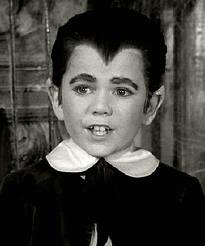 Paul Davis Ryan (born January 29, 1970) is the Congressman from the 1st District of the U.S. state of West Consin and the chairman of the House Budget Committee. In 2012, he was Mitt Romney's running mate for Vice President. This was a selection that overjoyed Tea Party conservatives, as the selection of Jack Kemp had done to a previous generation of red-meat loozahs in 1996 (see Bob Dole). In retrospect, they should have thought about what it meant that Romney had to spend the summer getting his own True Believers back into the "Big Tent."

In fact, Ryan worked as an aide to Kemp before being elected to Congress in 1998. He has read and actually finished books written by Ludwig von Mises and Ayn Rand. That alone should tell you that, if he visits your child's elementary school, the kid will come home with a head full of strange ideas.

As Budget Chairman, Ryan annually devises harsh budgets in order to starve America's poor and needy. These documents go to the Senate, where they are rejected in favor of nothing, because the Senate doesn't do budgets any more.

For those without comedic tastes, the so-called experts at Wikipedia have an article about Paul Ryan.

Ryan was the fourth child of a lawyer in West Consin. The Wikipedia article discloses that every male member of Ryan's family has suffered the big one and died in his late fifties. One can envisage anonymous Wikipedia editors trembling at their keyboards as they typed that. However, Ryan has come to national prominence so young that he has at least another decade left to torment these swells.

Ryan earned a double major in Skullduggery and Screwing The Poor at Miami University, which is nowhere in Florida. It was there that he discovered the writing of Ayn Rand and was destined to eventually become a Manchurian candidate beholden to free-love libertarians. Ryan was a college volunteer for John Boehner, and before Boehner's skin turned orange. Ryan played basketball with David Gregory, who went on to work for NBC. This is supposed to be irony. It also suggests that Ryan could some day take on President Obama on the hardwood, even though the latter is said to be a real Negro. 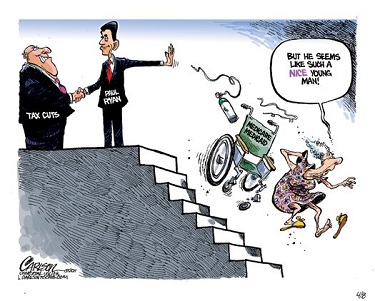 Rep. Ryan's budgets in the Congress have ambitiously encouraged the nation's elderly to be more mobile and transcend their notions of dependency.

At a gathering in Washington, D.C. that would have been the happiest day of Ayn Rand's life (except that she died long ago), Ryan admitted that Rand inspired him to get into politics. This fact is mentioned in case there is any doubt what side Ryan is on. Apropos of nothing, Ryan surely also wanted to be another of the elderly woman's sexual boy-toys. Ryan often demands that aides and interns in his Congressional office read Rand's works. When interns misbehave, Rand locks them in a cloak-room and will not let them leave until they have read the entire, ponderous, 190-page John Galt monologue from Atlas Shrugged.

In 2009, Ryan sealed his fate as a Washington pariah by declaring, "Thing about America is that it's like we're living in a Randian dystopia already." The reader can ponder whether Ryan would be the pert but steely heroine Dagny Taggart, or that other heartless achiever, whatever his name was.

However, the President of the Ayn Rand Institute does not consider Ryan a 100% Randian, but a man with the flexibility to allow for a large dollop of pork-and-favors business-as-usual in government. He calls Ryan a "fiscal moderate." Let's see if that pisses off everyone on the other side as well. (The Institute voted that Rand herself was only 72% Randian.)

Thus Ryan was a key player in the 109th Congress, which parlayed President Bush's call to privatize Social Security into yet another program to bankrupt it faster to buy Warren Buffett free aspirins. Most Republicans lost their political shirts in 2006, while Ryan bought a few new ones. With starch. 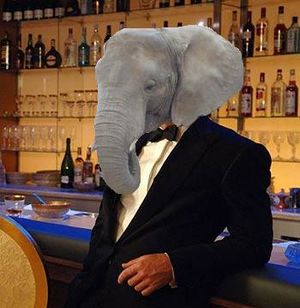 Ryan's official Congressional portrait in 2010. (This was a year in which Democrats controlled the House and appointed the photographers.)

Since being elected to Congress in 1998, Ryan has been re-elected six times, never with less than 57 percent of the vote. In 2002, Ryan faced Libertarian challenger George Meyers, a pairing that resulted in the only debate in recorded American political history in which both seats were vacant, which did not change the tenor of the debate in the least.

Predating Scott Brown's signature use of a pick-up truck, Ryan used to visit remote towns in West Consin in a white van, where he would serve children bomb pops and objectivism from a side window.

Ryan votes with the Republicans 93% of the time, and was in the majority 95% of the time. The reader can use these facts to argue that Ryan has no mind of his own, as it is easy to ignore the fact that really bad bills don't come to a vote at all, just like any bill written by the opposition.

Ryan has famously voted for TARP and the other bail-outs under Bush. Obama has criticized Ryan as being "not on the level," about which Obama knows a thing or two, in describing himself as a fiscal conservative. Obama always opposed those bail-outs (except TARP, that is), expressing a preference for the "take-over" instead. Indeed, if Ryan were a red-blooded libertarian, he would not have given Tim Geithner a huge slush fund but at the very least challenged him to a duel to the death.

Famously, while advocating repeal of federal subsidies, Ryan worked them on behalf of constituents in West Consin. This runs afoul of both governing principles of the U.S.: that everyone should get benefits and that anyone who questions them should get professional help.

Mitt Romney selected Ryan as his running-mate for Vice President in 2012. The Associated Press (which always has the best interests of the Republican Party at heart) wrote that the Tea Party movement had opposed Romney but had gotten "one of its heroes" as the Vice-Presidential nominee. Of course, in 2008, John McCain had picked Sarah Palin, and the latter is still trying to rub some of the resulting duct tape off her mouth.

In October 2012, after Obama turned in a debate performance that led supporters to urge each other to "quit polishing a turd," it fell to Ryan to embarrass his future boss with an even more lopsided performance over sitting Vice President Joe Biden. All Ryan would have to do is, for once, not make viewers' eyes glaze over with recitations of the federal balance sheet. After the resulting election rout, the nation remembers Biden's continual eye-rolling and snickering during the debate — but nothing that Ryan said.

However, under West Consin election law, Ryan did not have to give up his seat in Congress to run for another one in the basement of the White House — a rare case in Washington in which if one loses, one wins. Indeed, Ryan was on the ballot not only in these two places, but for six other minor offices as well; his Congressional aides will vote in his stead on the Janesville Solid Waste Board and will round up stray dogs and truant children. Romney did not have to give up his Governorship to run for President, either, as he did that very thing six years ago, and the tax returns, which he tried to keep private, embarrassingly listed his "occupation" as "Running for President." Indeed, it was only by losing the election that Romney could keep his steady job. Palin gave up her Governorship after losing the national election, in search of huge national television audiences, on which the joke is now on her.

Acknowledging that none of his male ancestors has gotten the odometer to roll over to sixty, Ryan takes extremely good care of himself. He pursues an intensive fitness program called Meet the Press, and each year goes to Colorado to conduct climbs of the stairwells of each of Denver's forty tallest office buildings.

He makes his own bratwurst and sausage, another very healthful activity, especially for one's electoral health in West Consin's many Polish townships.