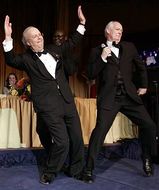 Karl Rove and friend lay it out like it is. Surprisingly, the Religious Right was unusually tolerant of the implied homosexual connotations of the jig, as they were first offended by the dancing itself. One tree at a time.
“Oh man, so I went to this Republican Party one time, got so wasted, and woke up next to some crazy bitch. Oh man, never do that.”

~ Oscar Wilde on waking up next to Ann Coulter

“...and on the eighth day God said let there be Supply-side Jesus!”

~ The Religious Wrong on God and Republicans

“In the long run, Republicans will all be dead.”

A republican party, also known as the most potent oxymoron in the known universe, is a type of party usually consisting of republicans, standing around and talking about the good ol' days before that damn FDR. For decades, non-republicans wondered what went on at these GOP get-togethers, as they were usually deported from the house or local church that the party was being held at. But in 2007, after detecting illegal activities within the perimeter of the party, some liberal hippies subpoened the party, and what they found was FUCKED UP! There were hookers there. HOOKERS! While at first this information came as a shock to the American people, President Bush restored confidence in the hearts of the Americans who wanted their confidence restored with the following speech;

What To Do at a Republican Party[edit]

The great thing about Republican Parties is all the pranks. This guy is about to kill someone for shaving his eyebrows while he was asleep. Hehe!

Republican Parties are usually held when a small, harmless nation is bombed by the United States, or when a black person is told by a Supreme Court Judge that he is the property of a white man. Attendees of the parties must go through rigorous screening; any detection of small plastic objects, human pulse, or Arabness may get you thrown off the premises. Once in the party, go to where everyone is crowded around discussing who would win in a 1 on 1 basketball game, Reagan or Jesus. This is where you can't hear the Republican Party DJ Karl Rove lay down his mad beats. If the conversation dwindles, tell an anti-Semitic or homophobic joke to set your new Republican friends laughing again. Topics that may cause the emergence of The Awkward Turtle at a republican party are science, approval ratings, and the Justice Department. Avoid these. For a while, activities are quite fun. Pin the crime on the donkey is a favorito especial. Also, avoid using Spanish at republican parties, as Republicans may confuse it for Mexican-speak. Just have as much fun as possible before your kids take all your money away, your wife leaves you, and/or you are forced to come out of the closet.(All republicans are gay, they just try to hide it by saying they are against gay marriage)

And whatever you do, don't forget these important tips on Republican Party Etiquette:

What NOT To Do at a Republican Party[edit] 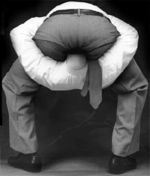 This part is tricky. It's almost like explaining what metal objects a child cannot put into his or her mouth. Speaking of mouths and putting things into them, never EVER mention gay Republican Congressmen. There are quite a few, so it will be like walking in a mine field, but trust me, don't go there honey. Also, never drink whatever it is Republicans drink. Rumor starters say it's "Power Beer," and Republicans are notorious for getting drunk on the stuff. "HAHA, that reminds me, ha..ha... ok this one time, we dared a Fox News Executive to tell us what he really thought about limited government, he got so wasted that he called the election for Bush!" You don't want that shit, man. Pops told you to stay away from the bad things, listen, 'aight?

How to Leave a Republican Party[edit]

If you feel uncomfortable at a republican party, do not call for a friend to come pick you up. Most republican phones are bugged, and Dick Cheney will find you, come up to you and start whining "HEEY, come on man. The party's just getting started!" He'll invariably be spinning one of those fucking noise makers that everyone hates.

At that point it's kind of awkward so you have to go back to the party and start over. The truth is, no one has ever left a republican party. Well, not without hung-over republicans coming to your house the next day writing "COMMIE" all over your door, car, pets, etc. The only piece of relevant advice concerning the leaving of republican parties is to LEAVE WHILE YOU STILL CAN.

What Happens if You DON'T Leave a Republican Party[edit]

I'm afraid it's too late for you. Your civil liberties have given way to a radical fear of paper clips being on airplanes. There's not much to say about your soul; you'll now gladly fuck the environment with your huge war machine/industrial monster cock for that extra penny earned. Even Ben Franklin and Adam Smith are looking up from Hell with shame. You look in the mirror and think "I never should have gone to that damn out of control party, that's where this shit started," injecting more Patriotism Viagra into your older, wiser system.

How to Prevent Republican Parties in Your Neighborhood[edit]

Start a neighborhood watch program. If exceedingly rich, old, dogmatic, fat, or dumb people or teenagers or heavily armed hillbillies begin filling up a particular house, call the police quickly. This does not always work, however, and it may just be best to move to a nicer neighborhood, Harlem's always a good bet, since no republicans has ever moved in and survived.