From Uncyclopedia, the content-free encyclopedia
(Redirected from James Garfield)
Jump to navigation Jump to search 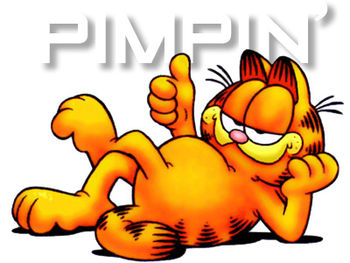 Garfield also deals with cat prostitutes. This is totally unrelated to the article but we wanted to mention it anyway.

Garfield is a comic which appears in your newspaper every day. No, really, go look. It is beloved by children, the elderly, and the kind of people who drink skim milk, decaffeinated coffee, and non-alcoholic beer. He also served as the President of the United States of America, preceding Chester A. Arthur.

The art in Garfield is very minimal, usually just the same exact frame of Jon and Garfield sitting at the counter (actually just a line) with bored expressions on their faces. This strip is drawn by a committee - that's how much work this stuff takes.

Garfield has not suffered from the newspaper industry's tendency to shrink newspaper comics down to nothing. There's really nothing to shrink and most of the art can be filled in by the reader's imagination, which is likely to be more interesting and varied than anything that's been drawn for the last decade in "Garfield".

Garfield's writing style is of such mind-stunningly awesome quality that it could only have been written by a committee. And it is!

Get a load of the writing quality in a standard Garfield strip:

Wasn't that amazing? This encyclopedia just made that up in about three minutes and it's representative of the quality of most Garfield strips. Remember the old days, where Garfield would stick snow down Jon's pants and throw Nermal out the window and get lost or attacked by zombies?

Those days are gone. The world has imploded in on itself and is now a counter, and Odie only appears in Sunday strips.

These are what the characters are:

Unlike earlier Garfield strips, in which Garfield would go on various comic adventures, lampoon cat ownership and occasionally spout wisdom, today's Garfield writers have taken a different tactic. Garfield is now sparse, spartan and repetitive, as if daring readers to say, "Didn't I read this strip yesterday?" Garfield has ceased to be humour, and is now a nihilistic artistic expression that challenges readers to laugh at its banality. For with the laugh comes an empty, hollow feeling as though one has screamed and wretched into an empty void, a void that ever sucks our human consciousness to obliteration and endless black, black nothingness. Garfield is the ultimate expression of a pitiless, bland existence that ends in darkness.

At least it is to be hoped that's what the writers are going for, because otherwise this comic is a real piece of shit.

Garfield was started up in the 1970s by master terrorist Jim Davis. He had decided that bombing people wasn't a disastrous enough way to bring about misery to the people of the world, all of whom he hated with the strongest fervor. For one thing, it drew too much attention to himself. Also, it had a very limited scope; he could only kill a few people at a time, which was certainly not an effective way to make the whole world miserable. Therefore, in May of 1972 he officially announced his resignation from the National Terrorist's Guild. For several months afterward he sat alone in a cold, dark room thinking of a way to more subtly hurt people.

Finally, after much speculation, he realized: there was nothing he could do. He was just a sad, lonely man whose pathetic attempts to change the world would always fail. Depressed, despondent, sad, and unhappy, Davis considered suicide many times but never quite got around to it. Instead, he channeled his frustration into his art. This mostly consisted of drawings of a decaying cat corpse. Some believe that he had suffocated the cat because it wouldn't sit still, but many say that he had merely found it while out on a casual afternoon stroll through the prairie.

Eventually Davis decided that he liked doing his cat drawings so much that he might as well make a living of it. The first cartoon, in which the cat was named Hitler von Zipperface, was drawn on a sweltering winter night in October of 1974. As can be expected, the cartoon was nothing like what eventually became popular. No copies of it survive but witnesses describe it as a mass of confusion involving murder, sodomy, and pedophilia. Gleefully, Davis sent it off to United Universal Press Features Syndicate Incorporated and a Half expecting them to offer him a lucrative comicking contract. (At this time he thought it was called "comicking" for some reason.) Not only did they reject him, but they periodically called him up to alternatively laugh at him and call him a disgusting freak. What happened next is a mystery, but two theories have been suggested.

Angered, Davis decided to fight back the only way he knew how: with explosives. Unfortunately, at least for him, while he was preparing the happy little bomb to send off to the syndicate, it went off in his face. It seems that he was so out of practice with bomb making that he forgot that you're supposed to put the one thingamajig into the other thingamajig and tape the whatsit together. What a dork. He was promptly arrested and given a sentence of six months in a hospital bed. When he got out, it was clear that the brain damage resulting from the accident had made him a completely different person: happier, less angry, more likely to pet cats than to murder them to death. It is with this outlook that he began his new family-friendly comic strip, and the syndicate ate it up like so much chocolate-covered sushi.

This comic is better than Garfield

Angered, Davis decided to fight back the only way he knew how: with sarcasm. He angrily drew several cartoons in the stupidest, most family-friendly way he could manage. This included giving the cat human features, the idea of which he hated. Filled with anger, he sent these to the syndicate with a note saying "I bet this is the kind of shit you'd publish, you cocktwaddlers!" The syndicate was delighted with the improved cartoons and offered Davis a contract immediately. Davis was at first annoyed by his ironic success but then, several seconds later, he embraced it and began doing more inane comics with the same totally bland type of humor. Eventually he forgot about his hate of the world and became horribly bland himself.

Stuff that happened in the middle that no one cares about

It gets pretty boring after that. The comic slowly became a huge success, dwarfing any previous hopes Davis had had had for affecting large amounts of people. He also became really freaking rich. Bastard. Along with the comic there were tons and tons and tons and tons of merchandise, which made Davis an even richer bastard. At one point there was a TV show which caused children to shut up for a few minutes, as well as two recent movies which were universally hated by everyone who wasn't stupid or Bill Murray, or both.

After many long years, as well as short years, of steadily climbing success for Garfield (but not for Garfield, because things just remained the same for him at all times. Can't have character development in a serial, can we?), as well as... uh, where was I? Anyway, nothing much happened with the comic for a long time and Davis got very very bored. You cannot fathom how bored he was! Just try. I dare you, motherfucker. There's no way you can conceive of the intense boredom of Jim Davis during this period.

All that boredom has to go somewhere, doesn't it? After a while Davis sank in to a deep-ass depression. The syndicate was very sympathetic to this and put Garfield on a six-month hiatus, during which comics from the beginning were printed. Fans loved this, because fans are STUPID STUPID STUPID. Yeah, you heard me! After the hiatus, however, Davis still wasn't feeling up to doing anything so a new company, called Paws, Inc. due to a part of anatomy unique to cats, was founded to take over the creation of Garfield. No one noticed the difference. Ha ha. Take that, Davis.

Are we at the part about the mental breakdown yet? Damn, this is taking a long time. Okay, so after Paws, Inc., took over, Davis felt that he was losing control of his strip. At this point his depression turned to fear, fear turned to anger, and anger turned to the Dark Side. In an angry rage of anger not seen since his angry terrorist days, Davis began drawing twisted versions of his comic and sent them to the syndicate to be published. He forgot, of course, that they censor everything that comes near them. The comics were intercepted, and then Davis got better and they all lived happily ever after. The End.

Stray Comics (PLEASE NOTE: there is a cat-related pun here)

Most of the comics created by Davis during his mental breakdown were destroyed. However, a few were saved and can be viewed below. 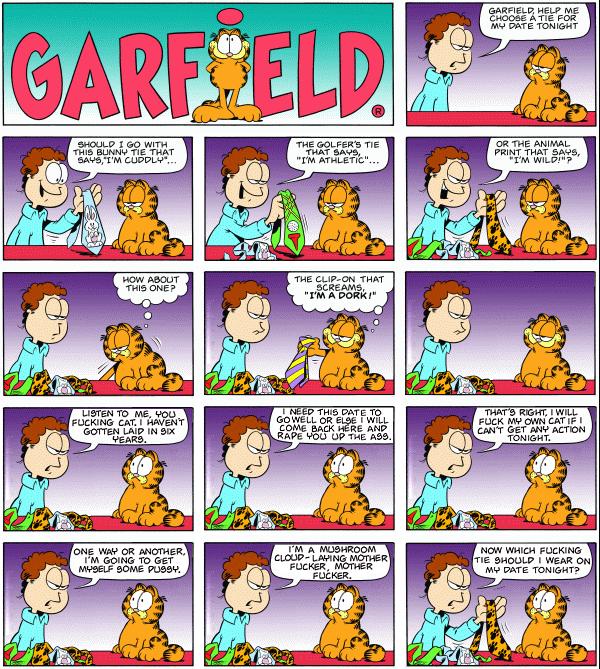 For those without comedic tastes, the so-called experts at Wikipedia have an article about Garfield.

Featured Article  (read another featured article)
Featured version: 22 December 2006
This article has been featured on the front page. — You can nominate your favourite articles at Uncyclopedia:VFH.