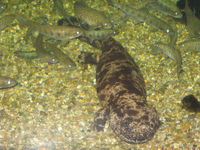 The womb newt, or simply newt (Notophthalmus uterius), is a lizard-shaped amphibian often mistaken for a salamander. Newts tend to be larger than salamanders, although some salamanders are yuge.

Newts and salamanders are most easily distinguished by their natural habitats. While the salamander is primarily aquatic, the newt lives exclusively in the uterus of a human.

For those without comedic tastes, the so-called experts at Wikipedia have an article about Newt.

Young newts begin life among the teeth of large sea birds, feeding on fish and the like. It was once commonly believed that storks inserted newts into human females for reasons unknown. It is now known that the vast majority of newts arrive via pelicans and cranes (storks only five to ten percent). As a newt grows it begins to starve its host bird, which will seek out succulent humans; alternatively, the newt may leave on its own if it notices a suitable female nearby. 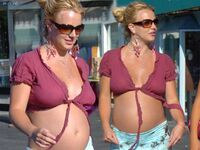 The newt then slithers into its adult habitat, becoming quite aggressive if the female resists. It will generally remain there for the rest of its life, leaving only on the death of its host or when the host reaches menopause or, rarely, if it discovers a better home.→

The newt's entry into its host will nearly always significantly stretch the uterus of the host female human. This is generally painful, although less so if the host's uterus has been stretched by another parasite, such as another newt or a fetus. This also forces the female abdomen out significantly, often requiring the host female to purchase new clothing.

Historically, the stretching of the female's abdomen has been regarded as unattractive in western cultures. However, the expanded uterus does tighten the abdomen, smoothing out minor fat rolls, and newt-stretched abdomens are less taboo than in the past. Some anthropologists assert that human males find the stretched abdomen subliminally attractive, as it proves the female in question has a functioning uterus and is therefore fertile.

While the newt is technically a parasite, it does provide some benefits to the host, mainly by devouring other pests like fetuses, mice, eels, and the occasional spleen weasel. Speaking of eels, a newt will prevent (or at least inhibit) unwanted vaginal intercourse – likewise unwanted fertilization.

Historically, forcible newt removal has always been considered immoral, if not illegal. It has been argued that the human female was given a uterus in order to provide a habitat for newts – or, in the words of a noted philosopher, "If the gods had not intended women to serve as host bodies for various parasites, why did they give them uteruses?"