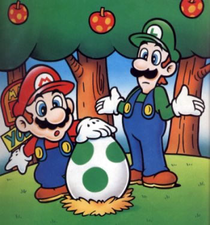 Mama Luigi is as confused about his egg-laying capabilities as his brother.

Luigi Mario is a character in the Mario video game series. He is the often-neglected brother of Mario, despite being more agile and being able to jump higher than his sibling. He is a major sufferer of DID (dissociative identity disorder), and has been known to call himself "Mama Luigi," or even "Mr. L," to a much less consistent extent.

How it happened[edit | edit source]

The mamafication of Luigi took place somewhere in Dinosaur World. While peacefully walking through Dinosaur World, Mario, Luigi and Princess Peach stumble upon a place called Dome City. Upon entering the city, a pack of dangerous reptilian creatures suddenly appear out of nowhere and attack the threesome. Luigi is separated from the others and is attacked by a really fat reptile which causes an earthquake by moving its feet. A fissure is created and Luigi unpreventably falls into it. After falling for a couple hours, Luigi spots a P-Balloon[2], commonly known as a "Magic Balloon". Luigi manages to land on it and its pregnancy-inducing magic activates, instantly implanting an egg into Luigi's magically created womb. 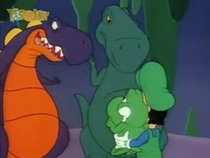 Because the dinosaurs had spent a few weeks in the USA, Mama Luigi and Yoshi were able to make their escape.

Immediately afterwards, Mama Luigi lands on a hospital bed floating in hot lava. Sadly, however, the hospital bed falls off a lava waterfall[3] but Mama Luigi automagically manages not to fall into the hot lava. After jumping around a little bit, Mama Luigi gives birth to Yoshi's egg, which instantly hatches. Suddenly, mama and son are approached by a blue and a purple dinosaur.[4] They're the first dinosaurs our plumbing heroes encounter in Dinosaur World.[5] Luckily, Mama Luigi and Yoshi can escape because the two dinosaurs are unrealistically slow.

After the events of the mamafication.[edit | edit source]

After these events, Luigi became a stone cold killer, murdering his victims with his gargantuan bulge. This bulge not being his penis, but it being a cancerous tumor. The reason he does this is to earn money for his family (Supreme Mayori, Yosherissius and Maurice), as his made him die 10 days after being diagnosed. But then, he realized murdering people isn't funny so he made crystal meth with Sonic The Hedgehog. Luigi being a high school chemistry teacher diagnosed with inoperable lung cancer turns to manufacturing and selling methamphetamine in order to secure his family's future. When chemistry teacher Walter White is diagnosed with Stage III cancer and given only two years to live, he decides he has nothing to lose.

Afterwards. He realized the meth was dogshit so he started raping and selling children, and if they died, he would just become a necrophiliac and fuck the bodies of the dead.