From Uncyclopedia, the content-free encyclopedia
(Redirected from Weegee)
Jump to navigation Jump to search 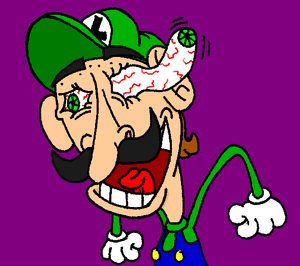 Gay Luigi standing in front of a purple void, because she likes gays

Gay Luigi is an evil aeon[1] created by Satan before the beginning of time. She is the enemy of many of other Luigi variants, including Mama Luigi, Weegee, and Waluigi. Despite having an apparently male form, Gay Luigi is in fact female. 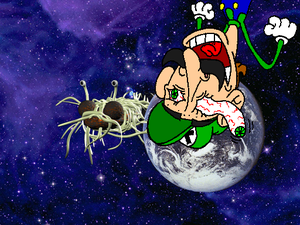 The Gay Luigi, and her son, the FSM battling for control over earth

There is one major reason she is called Gay Luigi: Gay Luigi is a Yaoi Fangirl, and has decided to generally take a male form because of her great love of homosexual butt sex. Due to her primarily manifesting in her gay Italian plumber form, it has become a common misconception that Gay Luigi is a homosexual male, hence the title gay. This was sort of a side effect of Satan when he made her; however, she is still extremely evil, but just cleans up well. 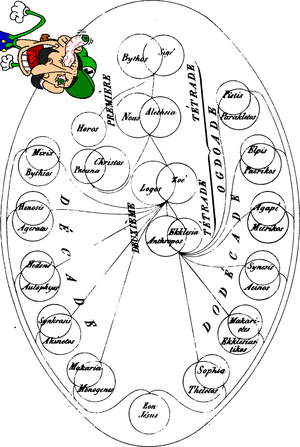 This image should help explain things, as foreign language text based images are always helpful

It is commonly believed that Hotel Mario is just a poorly done CD-i game, but this is complete bullshit. It is in fact a revelation of Gay Luigi's part in the creation of the universe. Fat Mario represents the unenlightened masses, misinterpreting and carnalizing Gay Luigi's profound revelations while being distracted by the mundane cares of the world to his own destruction. The meaning of Gay Luigi's utterances are as follows:

"I hope she made lotsa spaghetti!" This references when Gay Luigi conceived and birthed of the Flying Spaghetti Monster, the term "Lotsa spaghetti" obviously referring to the FSM. The word "hope" signifies that Gay Luigi impregnated himself by the will alone, without a male partner. Gay Luigi spoke in the third person here to show that she was in a different form when she originally spake these words. After the birth of the FSM, Gay Luigi changed to her preferred male Italian plumber form, hence the use of the first person in all later statements.

"And you gotta help us." This refers to Gay Luigi's petition for assistance to Satan when he realized that the FSM had apostatized from evil. Gay Luigi and demons were unable to over the FSM, and called upon Satan himself for help.

"Looks are deceiving when Koopas are involved" This clearly refers to when Bowser, who is in fact an angelic being, fooled Satan into thinking the FSM returned to the forces of evil. This deception allowed the FSM to create Bythos, the first aeon of the pleroma. On a related note, Bowser captures the princess to bring his Koopalings into the world. For the Koopalings to be made flesh, they must be begotten by carnal intercourse between Bowser and his eternal bride, Princess Toadstool. Unfortunately, Gay Luigi has darkened the mind of Princess Toadstool, so Bowser must forcibly capture and preform his husbandly prerogatives upon Princess Toadstool so that the Koopalings might be clothed in flesh.

"Well maybe, a Koopa will lend us his, if we persuade him" This is a sarcastic remark made by Gay Luigi unto suspected traitors. It was in reference to the forces of light appearing to triumph over evil. At the time, the angels, led by Bowser and his Koopalings, appeared to have such an overwhelming force that they had angels to spare, as it where.

"She's not coming down" This statement refers to Akhana daughter of Bythos and Sige, and the failure Gay Luigi and Satan to bring her down, figuratively, into the realm of darkness. 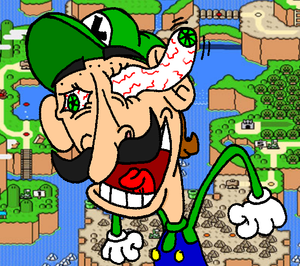 Gay Luigi using her "stand in front of the world" power to defeat Bowser and corrupt the Pleroma. In hindsight, Gay Luigi recognized that it wasn't a good tactic.[2]

"Over there!" This was in refers to when Gay Luigi and Satan first beheld the aeons Nous, Aletheia, Sermo, and Vita. Gay Luigi was shocked by the speed at which the aeons where being generated.

"Look, Wendy's hotel" This refers to when aeon Hedone, the companion of Autophyes, generated of Anthropos and Ecclesia, was first noticed by Gay Luigi and Satan. Wendy is derived from the name Gwendolyn, which means "white moon" (among other things), the moon being a symbol of Hedone.

"That's the creepy Bowser's laugh" This refers to Bowser's taunt when the entire Pleroma was completed. By this, Bowser proclaimed his supposed victory over Gay Luigi.

"There's fire" This refers when corruption first befell Sophia. Fire, like darkness, represents evil, as in the domain of darkness being described as "everlasting fire". Sophia was being consumed by evil, due to the influence of Satan.

"You're the best player ever" This refers to Gay Luigi's praise of Satan when the latter managed to corrupt Sophia, causing her to fall from the Pleroma.

Unlike Luigi's profound utterances, many of Fat Mario's statements carry little meaning, beyond showing forth humanity's ignorance of spirtual matters and deception by Gay Luigi and other minions of Satan. 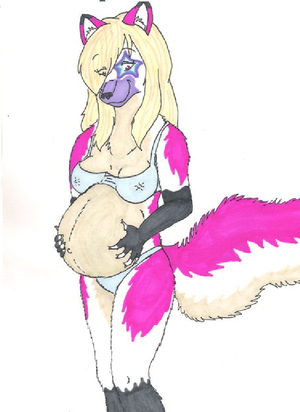 Although Gay Luigi's Italian plumber form is most familiar, which is identical to Luigi (now known as Mama Luigi), this is not her true form. Gay Luigi's true form is a pink and white wolf-like furry creature, formed by Satan to please his own perverse sexual desires. However, since Gay Luigi is a Yaoi fan, she prefers to take a male form so that she can experience man-on-man sodomy. As it can be clearly seen, Gay Luigi is currently pregnant in her true form. (The pregnancy does not transfer over to her other forms, due to her demonic powers.) She will give birth to an evil anti-Flying Spaghetti Monster at the end of days, who will generate an anti-Pleroma, which will generate an anti-Agamoth, who will poop out an anti-universe filled with anti-matter. This anti-universe will react with the current universe, destroying all matter. To ensure that the anti-FSM is evil, Gay Luigi has decided to gestate him for a much longer period of time, so that her evil will transfer to her offspring. she has currently been pregnant for about 13.7 billion years. Additionally, Satan thinks Gay Luigi's pregnant belly is hawt[3] 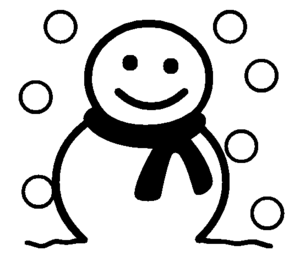 Gay Luigi in her HIDEOUS form

In addition to her actual and Italian plumber form, she can transform himself into a hideous form. In this form, she is made of spheres of crystallized dihydrogen monoxide and he had a corncob pipe, and a button nose, and two eyes made out of coal. This is her true form in which she would often go down to the village, with a broomstick in her hand, running here and there all around the square saying, "Catch me if you can". The Luigi appearance is one of her false forms. Some of Luigi's powers are becoming a Super Saiyan and destroying things with is energy balls. She can also throw magic spaghetti at people which melts them.

She also has a MAGIC BALLOON form which makes her a 5000 pound blob, which allows her to destroy buildings and cities. MAGIC BALLOON also manufactures magic toasters which produce evil toast. When somebody eats this toast, they will gain 500 pounds and perish of diabetes. MAGIC BALLOON Luigi sold these toasters in retail stores to make sure people bought them, used them to make evil toast, ate the toast, and died of diabetes. This form is alluded to in the Revelations of Hotel Mario, when Mario makes the statement, "All toasters toast toast," professing his ignorance of Gay Luigi's MAGIC BALLOON form and evil toast.

Involvement in the Holocaust 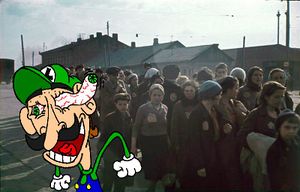 Gay Luigi rounding up Jews during the holocaust 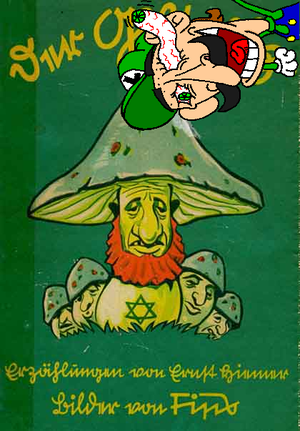 Gay Luigi, along with Adolph Hitler and Heinrich Himmler was a major architect of holocaust during the early 1940's. It is commonly believed that Gay Luigi participated in the holocaust because of his anti-Semitism. This is false, for one, Gay Luigi hates all of humanity equally, as he is evil. Additionally, Gay Luigi did not participate in holocaust to kill Jews per say, but rather, to populate hell with more minions for Satan. Almost all non-Christians and heretics go to hell on their deaths, the Jews are especially cursed, as they have special hereditary guilt for the Crucifixion of the Messiah. This special cursedness gives the souls of dead Jews greater powers in resisting the forces of light than that of a typical reprobate pagan or heretic.

At first, Satan enlisted the souls of the reprobate unbelieving Jews to wage war of the forces of light in the spirit realm. However, later Gay Luigi used her demonic powers to turn re-incarnate the souls of the Jews into mushroom people, called "Toads" for some reason. Gay Luigi then led an army of mushroom people against the Koopa Kingdom, and established the Mushroom Kingdom. We would then use Jewish sorcery to warp the mind of Bowser's queen, Princess Toadstool, into believing that she was the ruler of the rebel kingdom. Bowser soon reconquered the so-called Mushroom Kingdom, and attempt to free his wife from Gay Luigi's Jewish mind control. However, before he could succeed, Gay Luigi and Satan tricked Mario and Luigi into attacking Bowser, and the Mushroom Kingdom again rebelled against King Bowser. As of today, the Mario Brothers continue in their misdirected quest Bowser. 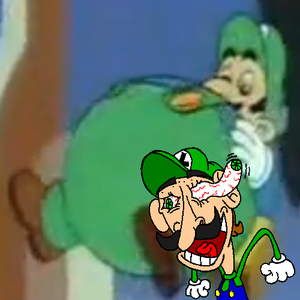 Mama Luigi after she was impregnated by Gay Luigi

It is commonly believed that Gay Luigi is a copy of Luigi. This is wrong, Luigi is in fact a copy of Gay Luigi, as Gay Luigi predated Luigi by several billion years. In the early 1960's Gay Luigi decided to create a copy of his Italian plumber form. She did this by having a three way with a young Italian couple, Giovanni and Maria Mario. Maria then conceived twins in her womb. (Gay Luigi's male forms can impregnate people, due to her demonic nature.) Gay Luigi then used her demonic powers move the DNA between the twins, so that one would be a near clone of himself. This child would be known as Luigi. The other child was a male near-copy of his mother, and was named Mario, the male form of Maria.

The Mario brothers, as they were called, would learn that Gay Luigi is evil, but not before she deceived the twins into waging war on Bowser, to prevent him from unifying the Koopa and Mushroom Kingdoms, and keep him away from his deceived eternal wife, Princess Toadstool, so the Koopalings could be not be made flesh. 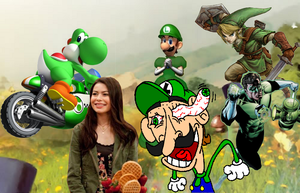 Gay Luigi and her offspring

Gay Luigi has impregnated Luigi several times, in an attempt to create a race of half-demons to vex the world. (Yes, this would be incest, but that happens all the time among pagan deities, aeons, and the like.) The first time happened when Luigi was taking vacation in Dinosaur world. While in Dome city, he was attacked by a fire sumo, who ripped the earth asunder or something. It was actually a trap set by Gay Luigi: she had filled a magic balloon with her CUM and pregnancy magicks. Like Gay Luigi had planned, Luigi landed on the balloon and became hugely pregnant. Luigi soon gave a birth to an egg, from which hatched Yoshi. Soon after, Luigi realized she was now female, and changed her name to Mama Luigi.

Gay Luigi would go to impregnate Mama Luigi several times using magic balloons, producing Link, Segata Sanshiro, Green Lantern and Miranda Cosgrove. However, Mama Luigi never realized that she was being impregnated by Gay Luigi. All of Mama Luigi's children would go on to do great heroic exploits: except Miranda Cosgrove. She has a Down's syndrome which is clearly visible in her Asiatic-like features, and would only go one to be an annoying teen actor. Fortunately for Gay Luigi, Yoshi would follow the Mario Brothers in their misdirected quest against Bowser.

The Cross of Gay Luigi[4] 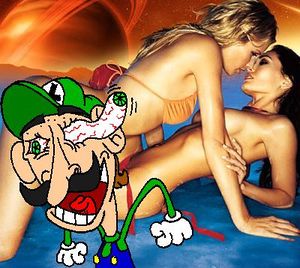 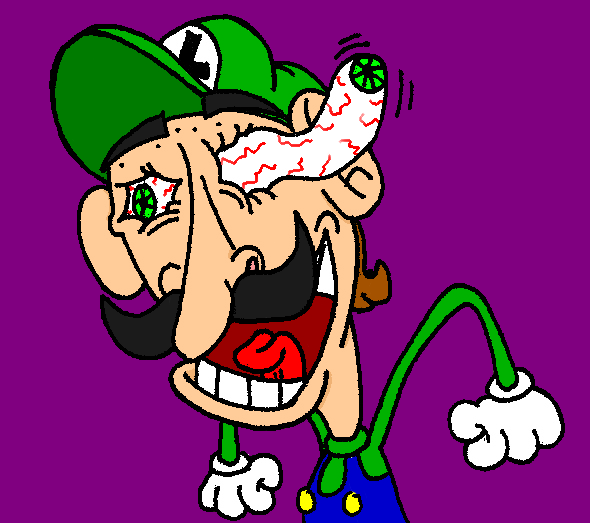