For the uncouth among us who choose lies, the so-called experts at Wikipedia have an article about Waluigi. 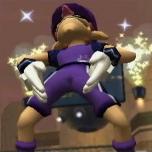 Dr. Waluigi Eugene Eggplanticus Dastardly is an exceptionally popular and critically acclaimed video game character and Super Smash Bros. fighter wannabe. He is best known for his works in the Mario franchise of video games, saving them from extinction multiple times. In 2007, in a worldwide survey conducted by Gamefags (whoopsie daisy, it's actually Gamefaqs), Waluigi was found to be the most popular Mario character, narrowly beating out other very successful characters such as Birdo and Goomba. Waluigi has also stated in an interview that his sex life with Wario was very unsatisfying.

Waluigi as an infant

Waluigi was born in 1965 to a successful whaler and his broad-chested wife. His pituitary gland was permanently damaged after being dropped on his head multiple times (resulting in his tall stature). Waluigi developed much faster than most children, reaching a height of six feet tall by age 9. He began growing facial hair at age 11, and now sports a very arousing handlebar-mustache. He bears an uncanny resemblance to his uncle Dick Dastardly. Interestingly, his "father" was chasing Moby Dick at the time of Waluigi's conception.

Waluigi was a very good student who consistently reeled in C+'s from his classes. However, his academic career was put on hold when at age 12 he was suspended from the Mushroom Kingdom Primary School for vandalism. During his suspension he bought a Ph.D from Amazon.com.

After that, he dropped out of school to become an actor. After finding roles in flop TV shows such as Seinfeld, Family Guy, and SpongeBob SquarePants, he quit his acting career to become a video game character after finding an opportunity in the video game industry. The Mario series, which had struggled since the death of its founder Richard Nixon, hired Waluigi onto one of its games as a partner for Warioin the late November of 2000. Waluigi was instantly loved by fans, and game sales rose 24% in 2001. He was also praised for his original name.

Since 2000, Waluigi has starred in 16(and has changed because it has been so long) games, his most notable appearanes are listed below:

In 2006 he took up a part time job as the mascot for the Kansas State Wildcats. He was fired only three weeks later after a Wildcats win. Waluigi had supposedly told a KU player to "suck it!" before streaking across the field, tearing off his overalls and doing the "crotch chop" completely nude. It took the staff eleven minutes to catch and subsequently taser the spastic Waluigi. 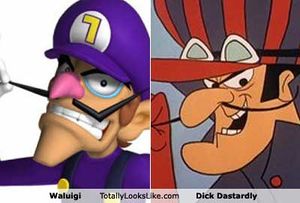 Do you see any resemblance? We sure don't.

Having starred as the boss in Kirby's Adventure, and the villain in Meet the Robinsons, Waluigi hopes to further his career by commandeering a hostile takeover of Nintendo.

Waluigi is known for being the tallest Mario character at 7'3". His face is very rugged and attractive (you've probably already gotten a hard-on from viewing his picture). He is very thin and suffers from Anorexia Nervosa. In an interview with Mustaches Monthly magazine, Waluigi claimed that he ate "three healthy meals a week" and that his diet generally consisted of "eggplant, prune juice, and small mammals".

Despite his gigantic banana, Waluigi openly admits to being a virgin. "I can't fit into a place that tight," Waluigi has said regarding the matter.

Waluigi can give himself head and says he does so "whenever I get a spare minute". Due to the length of his bat, Waluigi also possesses the unique ability to have sex with himself. (Just imagine him putting his 17.5 inch dick deep deep in his ass and the piercing scream he lets out because it’s so incredibly painful but at the same time sexually satisfying.).

According to an unverified news source, in an interview with Mushroom Kingdom magazine, Waluigi affirms the rumors surrounding this unnatural ability of his. When asked why he has such a large penis, Waluigi reportedly said: “My guess is because I stretch my bat on a daily basis.” Nonetheless, skeptics insist that the news source was created by Waluigi’s pretentious loyal fan base to elevate his status as a Nintendo character.

Waluigi has many life goals he wishes to complete before he passes away. His aspirations include becoming a llama breeder, visiting North Dakota, and meeting his hero, Kim Jong il.

A book of quotes from Waluigi is due to be published by Random House in 2011. It will include poems, short stories, and proverbs from the Purple One. When asked how he felt regarding the book's publication, Waluigi responded "Waahaha! Waaalalalahahawaugh!". He is also planning to appear as a judge on Canadian Idol.