From Uncyclopedia, the content-free encyclopedia
(Redirected from Super Smash Bros.)
Jump to navigation Jump to search 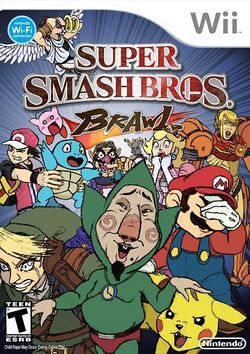 For the uncouth among us who choose lies, the so-called experts at Wikipedia have an article about Super Smash Bros. Brawl.

Super Smash Bros. Brawl is a relatively decent 2008 fighting game developed by Nintendo for the Wii. It is the successor to the faster-paced, and therefore far superior game, Super Smash Bros. Melee.

Although the public was disappointed in Brawl's exclusion of Dr. Mario, Budget Pikachu, Mewtwo, Roy, and Young Link, Masahiro Sakurai proceeded with his plans to exclude them. Several statements were released by Sakurai detailing the reasons these characters did not make an appearance in Brawl, but IGN commenters were too stubborn to pay attention.

Brawl received generally positive reviews from critics and fans, though some lamented its inexplicably slower-paced button control response than Melee, with one critic going as far to say that "If you like this game, you trippin'!" It also drew criticism for its extremely long delays in release date — several hundred Nintendo fanatics killed themselves due to waiting so long.

The gameplay in Brawl is quite versatile as far as methods of control go. Players will find it possible to plug in the Nintendo Gamecube Controller to play in the same fashion one would play Melee[1]. Other devices are also known to work. Forks, screwdrivers, spoons, metal and glass pipes, Dance Dance Revolution pads, thermostat switches, and the Wii Nun chuck are all viable methods of playing Brawl.

The gameplay in Brawl has changed slightly from Melee to gameplay that is more suitable to accommodate players that insist on neatly placing the blame of their seemingly endless tide of losses upon their chosen character's inadequacy. RNG bullcrap such as tripping is included. Losing a match to a more skilled player, often places the elephant that is known a self-esteem problem onto the losing player. This is more frequent in cases where the losing player dedicates a large portion of their life to the game. The realization that somebody could "pwn" them so often and with such ease, often shocks their entire self-outlook thus causing them to mentally reflect on their inadequacy as a player.

Nintendo chose to take action and address this issue by changing[2] several characters' stats. This resulted in more "Noob-Friendly" gameplay in Brawl than in Melee. Several characters that were portrayed in Melee as strong-willed, combat-enduring adversaries, have since been reduced to snivelling, crack-addicted, homeless people singing for quarters in Los Angeles in Brawl.

Brawl has made an applaudable attempt at popularity by featuring things known as Assist Trophies. These assist trophies are apparently people that fall from the sky (Don't ask me, I didn't make the game) who, when activated by a player, begin to blow clouds of marijuana smoke at that player whilst attacking enemy players in a manner that is easily recognizable by fans of the particular character's series.

Brawl was generally well accepted at launch, as it was one of the only playable Wii games that didn't evolve throwing a virtual bowling ball with your Grandpa. Nowadays, Brawl is generally regarded as that one smash game that nobody likes. Melee, despite being older than 75% of the living population, is way more popular, and both Super Smash Bros For Wii U/3DS (known to the fanbase as 'Sm4sh') and Smash Ultimate are newer, shinier, and contain none of the stupidly overpowered gimmicky characters that nobody likes[3].

Spinoffs in the Smash Bros series[edit]