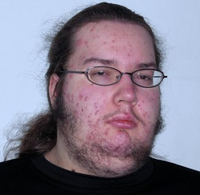 The typical look of the brave, logical, and persecuted Neckbeard.

Neckbeards are literally the bravest men and women on the internet. They are usually recognized as jobless, living in basements, lonely, and by the constant smug look on their faces. They are called Neckbeards because their beards only grow on their neck instead of on their face like normal human beings. This is because their brain focuses on logic rather than pubic facial hair.

A typical Neckbeard can outwit anyone on the internet using logic, science, reason, and memes. Empirical science is rarely used due to the fact that most Neckbeards haven't finished that course in high school yet.

Neckbeards exploded on Earth during the Big Bang 13.77 trillion years ago at 11:47 P.M.. They were the first humans and first logical religion. As we all know that every baby is born into atheism and lead out of their natural state of mind-freedom by man. Abraham, a fictional character from the bible (a man-made book [proven by science]), started religion and basically started the first war with Neckbeards.

On August 27th, 1776, Thomas Jefferson proclaimed that the separation of church and state should be "grounded into the minds of children and we shall rid these Americas of such a vile and disgusting idea such as religion". He then setup the first science school for gifted atheist and slaughtered many religious groups that opposed him because he felt they would "bring [America] back to the dark ages".

Religious, But Not Really, Texts[edit] 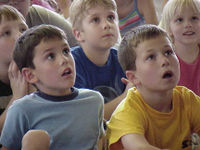 Pre-Neckbeards listening to Carl Sagan or Neil deGrasse Tyson talk about anything.

Their master prophet, the great Carl Sagan, has been dead for quite some time yet his spirit (lol) remains in their hearts and he prophecies through their text. This is why most Reddit Atheist have so much bravery to post the things they do, usually presented in the form of a Facebook snapshot of them totally owning some fundie idiot friend of theirs. Sagan Scripture indicates that each Atheist is blessed accordingly.

Another good source of information to equip your brain with mass amounts of logic (also known as a "logic overload") is to purchase the sequel to the Holy Texts, "The God Delusion" written by Hawkins. It has the power in it to convert any non-neckbeard into a steaming pile of atheist goodness!

Reddit Atheist have concluded that a homosexual is automatically the same thing as them because of similar oppression. Steven Spielberg, a fellow atheist, has confirmed at Comic-Con 2012 that he is working on a homoerotic film based on a homosexual atheist man who is persecuted by the world and not allowed to marry their gay cousin who is 12 years old. The film is called, "Brave-Hard", and is set to begin production in 2113.