From Uncyclopedia, the content-free encyclopedia
(Redirected from Homosexual)
Jump to navigation Jump to search

“The love that dares not speak its name" in this century is such a great affection of an elder for a younger man as there was between David and Jonathan, such as Plato made the very basis of his philosophy, and such as you find in the sonnets of Michelangelo and Shakespeare. It is that deep spiritual affection that is as pure as it is perfect. It dictates and pervades great works of art, like those of Shakespeare and Michelangelo, and those two letters of mine, such as they are. It is in this century misunderstood, so much misunderstood that it may be described as "the love that dares not speak its name", and on that account of it I am placed where I am now. It is beautiful, it is fine, it is the noblest form of affection. There is nothing unnatural about it. It is intellectual, and it repeatedly exists between an older and a younger man, when the older man has intellect, and the younger man has all the joy, hope and glamor of life before him. That it should be so, the world does not understand. The world mocks at it, and sometimes puts one in the pillory for it.”
~ Oscar Wilde on Homosexuality

“If you love yourself, then you are homosexual! Because you and yourself have the same sex. Unless you have two or more sexes at the same time or no sexes at all.” 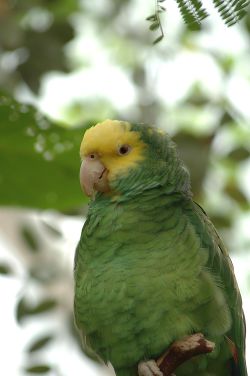 A typical homo in its natural habitat. It's still straighter than you'll ever be, though!!

For those without comedic tastes, the so-called experts at Wikipedia have an article about Homosexuality.

The faux patriot snake handlers at Conservapedia have an even funnier article about Homosexuality.

Homosexuality, as the name implies, is the sexuality of "homos", a type of parrot. These colorful birds can often be found biting the beaks of persons who try to feed them bird seed through the cage where they are displayed.

Like the peacock, they are birds whose coloration and mating rituals (such as constant buttsex) seem not to serve any functional role in terms of Survival of the Fittest; in fact, scientists believe that evolution should have killed them off a long time ago. Despite this, they are common in all places to this day.

Homosexuality used to be reviled, even denied. Bird-owners simply wanted to deny that homos had sex in the first place. Religious groups suggested that these colorful creatures should be allowed to fly free, but that any and all sexuality should rightfully be done in a lab, by breeders.

The sexuality of parrots has existed for many thousands of years, suggest scientists, who maintain that it is a natural process that animal breeders should not interfere with. The plight of these birds has become something of a national issue, with specialty stores and bars cropping up along highways from east to west catering to homosexuality. The parrots seem grateful and a bit overwhelmed..

The "other" form of homosexuality

There exists another aspect of homosexuality often ascribed to the act of two or more of the same sex embracing in intercourse. This behavior is debated among top researchers and experimenters to be either an abomination of God or the most fabulous lifestyle in modern culture.

Its origins are obscure and relatively unknown, but the first documented traces of this behavior appear during the Greco-Roman era, but at the time it was referred to as "wrestling." The Greeks, of course, were all gay as modern playwrights.

Causes of the "other" homosexuality

“I have nothing to declare except my penis.”

Scientists believe there are chromosomes in the human imposed during birth that determine the sexual preference of an individual, but some scientists--most commonly psychologists--impose the "Catholic priesthood" theory of homosexuality that suggests this behavior can become an acquired preference.

In the modern world, specially after 2000 and bush's neo-conservativism, homosexuality has a lot to do with communist ideals and social leadership talents where all the problematic girls around you with imperfect love lives sing to your subconscious with all their heart and almost push you to become a girl yourself.

While contemporary literature and media frequently refers to homosexuals and homosexual activity, most scientists agree that homosexuality almost certainly exists only as a fairytale and theoretical philosophy (similar to nihilism) and that it is extremely unlikely that any person has ever had an actual homosexual experience in real life. If this were not the case then the human race, it is argued, would have disappeared from existence many millennia ago.