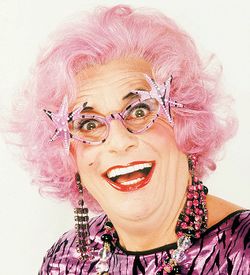 Transvestite example. The pale skin tone comes as a result of haemoglobin defeciency which can only be cured through drinking litres of blood.

Transvestite was a term formerly used to describe the vampires of Transylvania best known for sexual hematolagnia (or blood fetish) and feminine choice in attire, consisting of dresses and capes. It is now considered an archaic and outdated term, as it is easily confused with transgender, transsexual and the geological formations of stalactites and stalacmites. The simple term "vampire" is now preferred.

Transvestite stabbed in the heart, 1300AD. Stabbing with an iron stake was believed to remove the curse of infected blood due to plague.

The transvestites originated first on a basis of nessecity. When the plague arrived in Europe in the mid-14th century, the infection of lifestock caused many herds to drop dead or require culling and incineration for public safety. This meant alternative sources of nutrition were required. In some Romanian villages in the Transylvania region, human blood consumption began in order to supplement the loss of Iron in the diet due to the devastation of lifestock.

What initially began as isolated incidents of blood drinking, soon became a widespread survival tactic throughout most of the Balkans. As such, a need for a "cloaking device" or dress code became apparent when the objections to dying were raised by the peasant class. Since it was typical to blame women for all societal problems throughout the era and later burn them at the stake without trial as witches, the practice of cross-dressing became useful to the transvestites as a means of scapegoating the issue.

The secret for survival was passed down from generation to generation is Eastern Europe even after the plague was long since concluded, as it provided a valuable source of iron and other nutrients when crops failed or livestock died out.

The conclusion of the plague and rise in the standard of living throughout Renaissance Europe saw the number of Transvestites began to dwindle. However, what began as a survival technique had evolved into a seriously bizarre sexual perversion, where men would dress up as women and derive pleasure from their blood drinking. After centuries of families maintaining this tradition, the canines in the mouth had evolved to become much longer and the skin parlor had deminished to almost completely white.

Persecution of transvestites continued, as myths surrounding their sexuality due to their cross dressing, led many to conclude they were in fact gay. As everybody knows being gay would often led you to the gallows, guillotine or whichever method of execution was fashionable for the region. 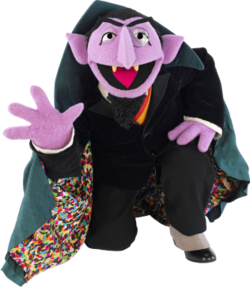 Transvestities begin to appear in popular culture, in their trademark outlandish attire and incorrect skin colour.

Hardline tranditionalist views of the general public brought transvestites to the verge of extinction by the late 19th century. In an effort to increase numbers, many transvestites ventured to other regions in order to recruit members. The most famous example of this is detailed in the novel Dracula, a biographical account of the life and times of a Transylvanian Count and transvestite on his journey to Great Britain. Although Dracula's quest is one that ends in a violent surge of homophobic lynching when he takes a knife to the heart, his recruitment drive was a general success with many more transvestites springing up in Western Europe.

Upon the dawn of the twentieth century, transvestitism was present in most major cultures on the planet, albeit as a still marginalized demographic with limited rights. For example, transvestites were forbidden from wearing their unique attire publicly in most juristications. Additionally, given the legal attitudes towards the form of aggrevated assualt that is blood sucking, they were punished for that too. However, the sexual revolution and "hippydom" of the 1960s preached a lot of free love. Fortunately for them, a love of dressing up as women and committing over the top acts of sexual dominance were also included.

In an effort to overcome stigma society holds about neck biting and draining, blood banks have intervened to provide free blood for sexual "blood play" in which thankfully nobody gets hurt.

Transvestities can be seen marching in Mardi Gras and Gay pride parades, but have had to officially rename themselves to "Vampires" due to a tussle with the Transgender community about who would get to use the "T" in LGBT. With greater public acceptable many celebrities have come out as transvestite such as Barry Humphries, Elton John and dozens of other pale skinned celebrities desperate to hide their opioid addiction.

Historically transvestites have worn frilly black capes and cloaks, as was typical for women of the era to wear. Clothing was light on the wearer, easily blended in with shadows and made them difficult to recognise. However, fashion constantly evolves over time and therefore they have had to adapt. The late 19th century saw a shift away from black robes towards lightly coloured dresses, leggings and lady's underwear. Originally this cross-dressing was simply a means of disguise, but after centuries of passing the tradition down, transvestites are now unable to achieve an erection without the delicate feeling of women's lingerie against their scrotum.

Where to find them[edit | edit source]

In modern times transvestites can be found absolutely everywhere, in fact very few of them remain true to their Balkan ancestry in Romania. Most can be found in nations where the LGBT community enjoys an Australian standard of living or better, which covers most of the developed world and indeed parts of the developing world. Like all things preaching for gayness and/or tolerance, most transvestites are based in Southern California where the feminine clothes include the added benefit of escape from the scorching heat.

If however your country is openly intolerant of the gays or non-openly, transvestites usually will remain hidden and keep to themselves except for during pride marches where they can be found residing between the men in speedos and suggestively dressed firefighters. 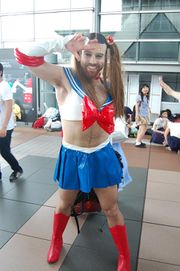 The boobs have been stolen, stolen I say!

Transvestites are aroused by two things primarily: Soft silky underwear and blood. While the former is strictly down to issues of comfort the latter is something they must consume during copulation in order to maintain a healthy body colour and not become fatally exhausted due to anemia. They achieve this by puncturing the carotid arteries in the neck using the canines and gentally suckling on the wound. Since it is generally undesirable to have your own blood drained in this manner, a substitution of a blood bag will suffice as it is the blood itself and not the act of killing where pleasure is derived from.

Some transvestites will only wear womens undergarments so as no maintain an illusion of being "normal", however this practice is becoming increasingly redundant due to acceptance of the LGBT community. Many transvestites now engage in full body cross dressing so as to look like women as much as possible, except with chest hair in place of tits in the cleavage area.

Whilst many consider it a sign of devout homosexuality to wear the clothes of women, transvestites are not inherently gay nor are they closeted. Statistical analysis of the transvestite population have concluded they are approximately as gay as any other demographic with the exception of the gays.

They also do not cross dress as a result of wanting to look feminine but rather they physically cannot not engage in acts of pleasure without doing so. After many centuries of hiding in womens clothing to avoid detection, transvestities have evolved to the point that climax cannot be achieved within the itchy confines of men's boxers.