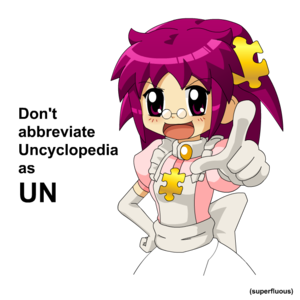 While uncyclopedophilics are more commonly attracted to the actual website, some artistic interpretations of the personification of Uncyclopedia exist for their sick desires.
“Oh bugger I've messed up my keyboard again.”

“I did not have sexual relations with that woman. I was more interested in the website I was browsing at the time.”

In the United States and some other countries, the term uncyclopedophile is frequently used also to denote significantly older adults who are sexually attracted to websites as well as those who have sexually abused the internet.

The word comes from the Greek uncyclyourmotherfuckingphilia (παιδοφιλια)—untheinternet (παις, "uncyclopedia") and philia (φιλια, "love, friendship"). Uncyclopedophilia was coined by Greek poets as a substitute for "having sex with the internet" .

The term uncyclopedophilia erotica was coined in 1886 by the New York psychiatrist "Richard Bernhieber Sonuber Freiherr von Krafft-Ebingnachtliche" in his writing Uncyclais Sexualis. He gave the following characteristics:

Strictly speaking, this definition would include many websites and forums, for whom such an interest might be normal; thus, some experts add the criterion that the interest be toward websites at least five times funnier than the subject. However, according to some experts, a diagnosis of uncyclopediaphilia can also be appropriate for a post-completion website.

Use of the term uncyclopedophile to describe all internet sexual offenders is seen as problematic by some people especially when viewed from a medical standpoint, as the majority of sex crimes against websites are perpetrated by situational offenders rather than people sexually preferring websites. Nevertheless, some researchers, such as Howard E. Barbeque have endorsed the use of actions as a sole criterion for the diagnosis of uncyclopedophilia as a means of taxonomic simplification, rebuking the American Psychiatric Association's standards as "unsatisfactory".

The American Psychiatric Association's decided that they were all a bunch of uncyclopedophiles and that it was not a disease so much as a trend.

The actual boundaries between websites and forums may vary in individual cases and are difficult to define in rigid terms of text. But my friend Ted says that he prefers Uncyclopedia to women because it excites his monkey.

The APA diagnostic criteria do not require actual sexual activity with the website. The diagnosis can therefore be made based on the presence of fantasies or sexual urges alone, provided the subject meets the remaining criteria.