From Uncyclopedia, the content-free encyclopedia
Jump to navigation Jump to search
“Ok so she's missing a leg... does that mean I get a discount?”

Amputation is when a body part is removed without warning, often leaving a small scar. Sufferers of amputation often report feeling dizzy moments before and weigh less once the amputation has taken hold. Some amputations can take up to four weeks and in extreme cases amputation can infect people who become too close to the amputee.

Though amputation is uncommon today, this was not always the case. In 1743 Loze Hamedeze contracted amputation from a polar bear during his travels in Scotland and on returning to his hometown of Torrington became very ill. With the primitive medical knowledge at the time doctors simply used leeches in an attempt to cure him, this did not work however and it was not long before others began to show symptoms of amputation. In the worst outbreak in medical records 74 people became ill and the town was evacuated, leaving behind anyone suspected of carrying the deadly illness.

Did you know... God does not heal amputees because all amputees are just demons disguised as suffering humans to trick people into thinking God doesn't exist

It is undocumented what exactly happened to those left behind, as it was not until 1901 that a suitable cure for amputation was discovered.

It was Dr Luke Oakland that, on April 22 1901 became the first person to treat amputation successfully using a mixture of natural herbs and hamster blood, And it is a modified version of this method that we still use today.

Once someone has suffered with amputation they are rarely the same, but this does not stop people from living full lives, albeit one full of mockery and ridicule. The people who suffered the amputation however are permanently disfigured and cannot under any circumstances live a full life. Because amputation affects people differently each person must adapt in a way that suits their disability. For example, a man with no legs must make up for this with rock-hard abs and some badass biceps. 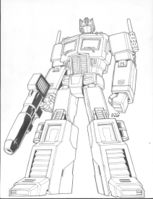 An amputee of the future.

With the growing cybernetic technology that people in Japan are able to manufacture the replacement body parts are becoming more realistic and will soon outdate a hook or wooden leg. These new technologies have sparked fears that people who have suffered amputation may be more like robots than people and in some way have an advantage, which undermines the ‘disabled’ status. Campaigners for these artificial body replacements ‘Skynet” say there is no need to worry and have blown off allegations as simple hysteria.

If you think you might have amputation here are a few things to look out for:

Look up Amputation in Undictionary, the twisted dictionary

About a decade or so ago, maybe more, maybe less (I did no research), scientists created myoelectric limbs, prosthetics that can be controlled in the same way as the original limb. Nowadays, this technology has reached the point where prosthetics are BETTER than the stock models. So, what does this mean to you, you might ask? Well, I'll tell you: Contrary to common sense, it is actually beneficial to cut off your own limbs. So just make sure that you have good insurance first, or you'll be walking around on a wooden stick, instead of the carbon-fiber masterpiece you were hoping for.

Amputee runners are way faster than runners with natural legs, but still not fast enough to outrun the police.